Navigating between two cultures with humor in “Familiar” 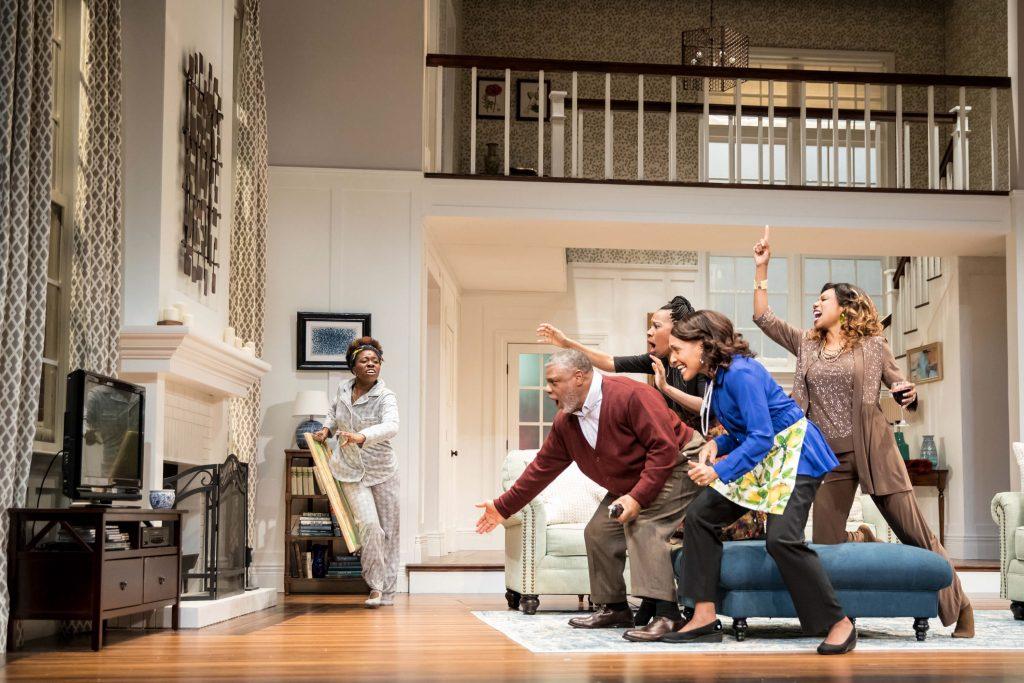 The cast of “Familiar” by Danai Gurira ’01, directed by Taibi Magar. Photo courtesy of Dan Norman.

“Familiar” is the latest play by Macalester alumna Danai Gurira ’01, who is known for her roles in “Black Panther” and “The Walking Dead.” The play, which is currently showing at the Guthrie, is the tale of a Zimbabwean-American family’s struggle with personal trauma and cultural identity. Marvelous (Perri Gaffney) and Donald (Harvy Blanks) left Zimbabwe for the US in search of a better life when their homeland was ravaged by a civil war. After more than three decades, their American dream seems to have been realized in Minnesota. Their older daughter Tendi (Shá Cage ’95) is set to marry to her white fiancé Chris (Quinn Franzen) from Minnetonka. However, when Tendi secretly invites her aunt Anne (an absolutely superb Wandachristine) from Zimbabwe to come and perform a traditional nuptial blessing, the wedding preparation begins to spiral out of control as old wounds are reopened and new realizations are made.

Even before the unveiling of this tangled plot, something about “Familiar” catches my eye. On stage is the elegant interior of an American home which bears no trace that its inhabitants are from Zimbabwe. I even walk up close, scrutinizing every part of its décor — the wallpaper, the flower paintings, the wooden hanging. Still, every detail supports the appearance of a bourgeois American family. Why is there no, so to speak, “Zimbabwean-ness”? Are the dwellers consciously trying to put behind a past? Or is this the inevitable result of assimilation? Even before its start, “Familiar” is already intriguing. And that highlights the brilliance of this boisterous family drama — it triumphs in details.

The seamless collaboration among the play’s uproarious cast is another testament to the play’s attention to detail. No matter where the focus of the audience’s attention is, be it a bitter exchange between Marvelous and Anne, or Chris’ comical encounter with his brother Brad (a hilarious Michael Wieser), all the characters are visibly invested in the scene. So when Marvelous and Anne harshly condemn each other’s views on traditions, Tendi’s patriotic younger sister Nyasha (Aishe Keita) is also seized with distress. When Brad comes to help Chris to perform “roora,” the traditional Shona wedding ceremony proposed by Tendi, Anne’s self-assumed superiority as a native Zimbabwean ordering white people around cannot be more evident. This organic unity among the ensemble gives the play an energy so unforgettably fresh and affecting that, as a viewer, it is virtually impossible not to be emotionally invested in the family’s complicated affairs.

Other detailed arrangements that shine through the play include the combination of Shona and English that characterizes the speech of all the characters from Zimbabwe. This creative decision not only gives the drama on stage a sense of authenticity; it forms a powerful juxtaposition with the family’s exterior display of “American-ness,” inviting the audience to both question if one can truly abandon one’s cultural origin and probe the essence of cultural identity. Anne’s distinctly accented English, coupled with Marvelous and Donald’s more assimilated tones and pronunciations, are yet another example demonstrating the crew’s effort to ground the play in reality.

This meticulous attention to detail endows the play with such a compelling quality that, despite its dramatic twists and shocking revelations, there are few occasions that leave the audience in doubt of its credibility.

However, this is not to say that “Familiar” is without its faults. Humor, for instance, becomes a double-edged sword. On the one hand, the play is truly funny. The lively performances from its talented cast and the play’s ingenious designs of cross-cultural encounters produce laughter in the theatre that verges on hysteria.

On the other hand, humor also undercuts the gravity of the play’s key concerns. The energetic debate on the importance of one’s cultural roots between Nyasha and Marvelous, for instance, is frequently distracted by Marvelous’ jokes. As her humor induces chuckles, it also makes light of the cultural issues at the center of the play, forfeiting a wonderful opportunity to fully explore the ideas surrounding these issues. Even more fatally, such humor is frequently used as the means for resolution of disagreements among family members. Such a creative choice is definitely entertaining. But one wonders about the true stability of this family if their primary solution to disputes is to crack jokes.

In addition, as this rowdy drama calms down towards the end, it becomes so intent on conveying a particular message about the importance of one’s cultural origin that it leaves no room for the audience to arrive at their own answers. “Familiar” is at its best when it raises open-ended questions about culture and offers different possibilities through its characters’ diverse responses. At the end, however, as multiple characters preach a very didactic message, the play forces its opinions on its viewers, ironically undermining its eloquence and limiting the audience’s engagement with the core issues.

That being said, it is still a play worth watching. “Familiar” is by no means perfect, but its raw energy and the important questions it asks are reasons enough for you to go to the Guthrie and immerse in this Zimbabwean-American family’s sorrow and joy.

“Familiar” runs until April 14 and is approximately 2 hours, 10 minutes with one intermission. You can find information about pricing and discounts on tickets on the Guthrie’s website.