Oscar Wilde’s “The Canterville Ghost” at Theatre in the Round 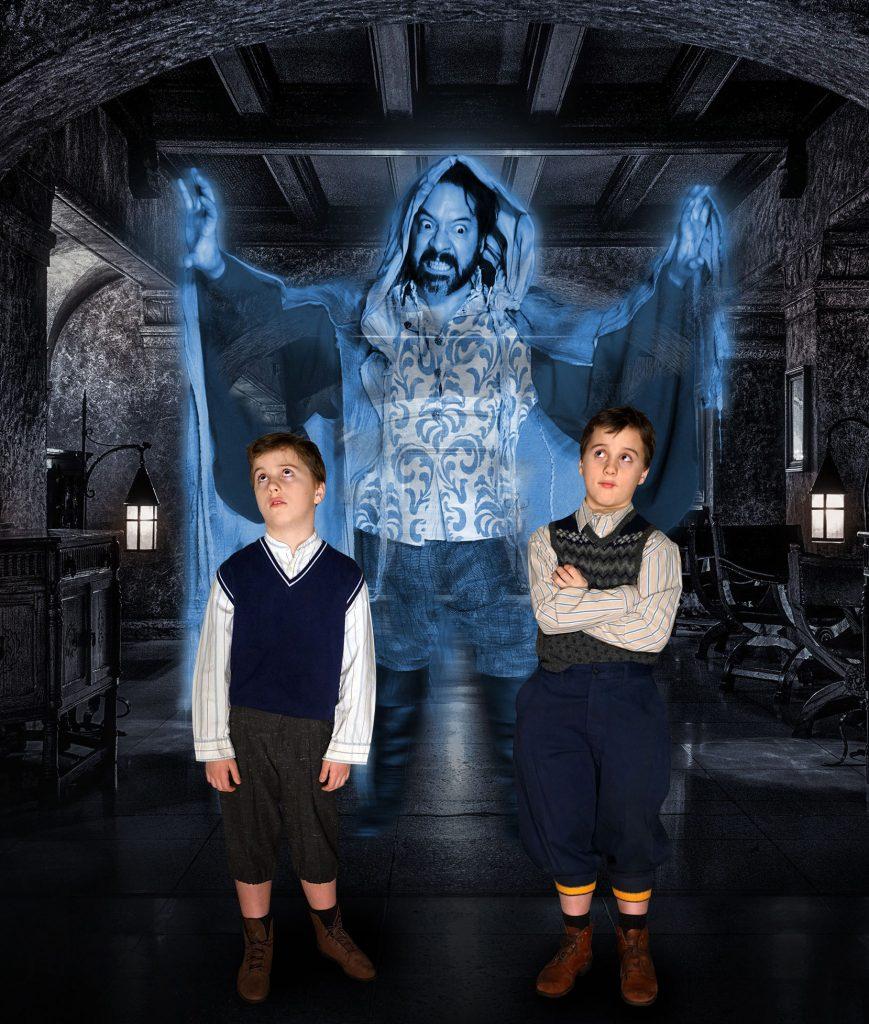 The spirit of Sir Simon Canterville has haunted his English mansion for more than 500 years, but he’s appalled at the invasion of his home by Americans and determined to scare them out. (back: Mark L. Mattison; front: Edwin Henderson, left, and Emmett Henderson, right). Photo courtesy of Bob Suh.

One of the most prominent figures in theatre history is Sir Oscar Wilde, whose works are still produced for the screen. Known for his poetic scripts and unusually lavish style of dress, Wilde caught eyes and ears in 19th-century London and still holds them to this day. Yet, aside from the massively successful “The Picture of Dorian Grey,” Wilde is rarely remembered for his several novels and novellas. Minneapolis’ Theatre in the Round makes an effort to change that with their newest production, based on Wilde’s first novella, “The Canterville Ghost.”

Adapted by Marisha Chamberlain, the play begins and ends with monologues by Wilde himself (played by Mark L. Mattison). The farce centers around a boisterous scientist and inventor, Professor Otis, as he moves his wife and three children from the United States to a supposedly haunted mansion in Cheshire, England. In their adjustment to British life they meet both the young duke and Mrs. Umney, the mansion’s only maid to not resign due to the horrible ghost. And while the ghost plans to drive the unwelcome Americans out like all before them, the family’s hilarious no-nonsense attitude forces the 500-year-old spirit to alter his course of action.

“The Canterville Ghost” is a perfect choice for Theatre in the Round’s 66th season. The longest-running theatre in Minneapolis, this venue is unique in its arena-style performance space. Two-hundred and forty five seats surround every angle of the playing area, as opposed to a more conventional audience on one or three sides of the stage. Each observer, whether sitting in the stage-level front row or the elevated back rows, is within 30 feet of the action.

Unsurprisingly, after decades, Theatre in the Round has its staging methods down to a science. Still, the attention to detail in every movement is astounding. Director Lynn Musgrave has her actors use large, purposeful gestures as they speak so that, even if an actor’s back is inevitably turned towards an audience member, their specific reactions and intentions are conveyed. Characters find ways to turn in a different direction a few times each scene so every section of the theatre gets an equal vision of their faces, and yet the staging rarely feels busy or aimless. Somehow, a story about a haunted mansion with a romantic subplot feels natural in its necessarily overacted choices.

The stellar cast of nine leads this directorial effort to success. Mattison in particular ignites huge bounds of energy into the space in his bookend scenes as Wilde, but especially as he stars as the infamous ghost throughout the bulk of the production. Prior to his first entrance as the ghost, the performance is cordial — funny, yes, but nothing particularly special. Once Mattison enters the arena in the third scene, though, a new zeal spreads throughout the audience and the cast that lasts throughout the remainder of the two-hour performance. His first entrances, complete with green fog and surround-sound ghoulish noises that sweep around the theatre in waves, are effectively frightening. These unnerving moments are what makes his progression to a frustrated, complaining demon that cannot manage to scare the new family all the more hilarious. From dragging around chains to jumping absurdly, speaking in an unwavering inflection reminiscent of Gollum or Pennywise to a dejected back and forth with audience members about how he “just [isn’t] in the mood to hear you laugh at me,” Mattison’s commitment to the fantastical spirit shines.

Among other standouts from the ensemble are John Goodrich as Professor Otis and Chrissy Sonneck as Mrs. Umney. The contrast between these two, especially in their inflections, solidifies the difference between the Americans and the British that sets the foundation for many of the ghost’s misfortunes. Goodrich is the first actor to enter following the brief introduction by Oscar Wilde, and his hilarious tone, evocative of a used car salesman, rings like a bell through the space. Mrs. Umney, meanwhile, speaks in a proper British accent — and though she doesn’t have many longer lines of her own, her judgmental interjections are comically well-timed and make her few scenes memorable.

Otis’ wife and daughter, played by Kari Elizabeth Godfrey and Chloe-Rose Severson, respectively, struggle to maintain the classic American cadence without Goodrich’s focused effort to guide them. In the presence of Sonneck’s or Grant Hoyer’s (the duke of Cheshire) British accents, the two women tend to slip in and out of their natural speech and into darker British tones at random intervals. If not for Goodrich’s on-point satirical speech, this would hardly be noticeable; but because of his vocal success, the efforts of those around him fall short. Severson, especially, proves her acting chops to the audience in the play’s climactic scene, but her uneven tones distracts from her skills for a majority of the first act.

Overall, “The Canterville Ghost” soars in the arena and is sure to be a highlight this season. The show plays now through April 8 on weekends, only a two minute walk from the Green Line, with tickets at $22 a piece. For those looking for a laugh these last few weeks of the semester, Theatre in the Round offers a great break from reality and into a hysterical adventure.