The Mac Weekly exchanged ad space for booze in the 1990s 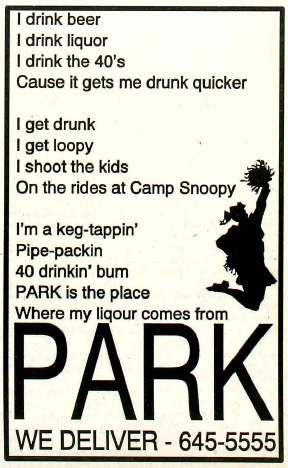 One of the Park Liquor ads that The Mac Weekly ran in their April 23 issue in 1993. Photo courtesy of Macalester archives.

Park Liquors was already an established part of Macalester’s culture in the early 1990s. It had an especially close relationship with The Mac Weekly, but this ended in 1993. In the Feb. 19 issue of 1993, a headline titled “Weekly Shut Down” graced the front page. The accompanying article explained that campus security had confiscated two cases of beer from The Mac Weekly office, prompting Campus Programs to decide that alcohol was prohibited in the office and The Mac Weekly would be “unable to accept beer in exchange for advertisements.” The advertisements in question were weekly Park Liquor ads featuring poems written by The Mac Weekly staff.

The Mac Weekly faced issues beyond drinking and reporting after the April 23 issue of 1993. That week’s Park Liquor ad included a poem referencing drinking 40’s, getting drunk and then shooting kids on the rides at Camp Snoopy. (Camp Snoopy was the Peanuts-themed amusement park at the Mall of America before it became Nickelodeon Universe). The ad sparked outrage across the Macalester campus and beyond. Parents, administrators and students wrote letters to the editor expressing their anger with the ad. Complaints of endorsing child abuse or murder and glorifying alcohol abuse were published.

Both The Mac Weekly Ad Manager and the Editor-in-chief issued apologies. Chris Huebner, Ad Manager, wrote that “Park Liquor is a fine and respectable establishment which was misrepresented by the Weekly and deserves no blame for the contents of the printed ad.” The ad had apparently not been reviewed by Park, per usual procedure, due to time constraints. He added the ad was “by no means meant to condone the killing of small children.” Alex Jeffries, editor-in chief, simply wrote that “what may be seen as dark humor to some can easily offend others” and apologized for a difference of opinion, with a promise to “be more sensitive with regard to child abuse.”

This was not the first misstep for The Mac Weekly in representing Park. A Valentine’s Day ad ran earlier the same year, announcing “I love you/you love me/Sex is a possibility…” then suggesting types of alcohol available for Valentine’s Day dates at Park Liquor. This ad was criticized for the connotation that one should be getting their Valentine’s Day date drunk for sex. The lack of awareness towards the importance of consent was especially problematic in the setting of a college campus, where sexual assault rates are known to be high, with and without alcohol, as the commenter pointed out. The staff of The Mac Weekly did not comment on the pushback towards this ad; the headline above the critical letter to the editor was “Ad seen as insensitive.”

The Mac Weekly and Park Liquor’s tradition of exchanging space for alcohol ended in 1993, after multiple cases of advertisements missing the mark and offending the Macalester community. Today, only 25 years later, the thought of a school newspaper trading ad space for alcohol from a local business is outlandish at best. However, in 1993, it was not only freely admitted, but published.