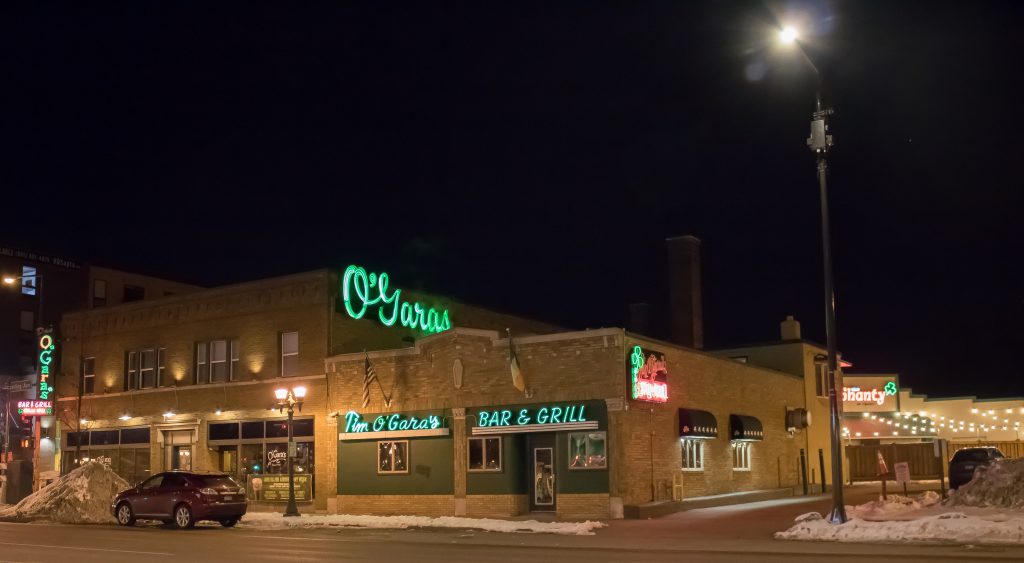 O’Gara’s Bar and Grill will undergo major renovations in the coming year. The new building will have a smaller restaurant area on the bottom floor and new apartments above. Story available at themacweekly.com. Photo by Carmen Bustamante ’18.

The building housing O’Gara’s Bar and Grill, a family-owned Union Park neighborhood landmark for 77 years, will soon be demolished and rebuilt to include a new apartment complex with a smaller version of the restaurant on the ground floor.

The restaurant has expanded significantly over its nearly eight decades at the corner of Selby and Snelling, while being passed down from father to son three times.

Third-generation owner Danny O’Gara hopes that the upcoming renovations will prevent the restaurant from stagnating and losing business, noting the large number of historic restaurants forced to close in the last several years.

“I think it is a trend, because for [restaurants] that have been around long enough, people think, ‘oh, they’ll be there forever, because they’re always busy,’ O’Gara said. “Well, if you don’t change, your business starts to decline. Change is needed for the next generation.”

Just last year, over 60 restaurants closed in the Twin Cities – The Star Tribune coined 2017 “the year of the closed restaurant.” Many of the restaurants closed were small, locally-owned institutions, including the Macalester-adjacent St. Clair Broiler and Grand Cafè.

While many classic Twin Cities eateries have shut their doors, however, almost the same number of new restaurants have taken their place. O’Gara believes this rotation reflects new industry standards.

“The bar and restaurant industry is changing rapidly,” O’Gara continued. “There’s a lot of really nice new restaurants opening up. There are 150 taprooms around the state right now, and those are competitors we didn’t have before. Just to stay relevant, we need to change with times and reinvent ourselves.”

That said, O’Gara is mindful of his restaurant’s roots. The renovation will restore many of its distinctive elements, like its old tin ceiling and the historic mural painted by Jimmy O’Gara when the establishment opened in 1941.

O’Gara’s is working with developer Tony Barranco of Ryan Companies and the Union Park District Council (UPDC) to remodel the building to fit in with the historic neighborhood.

Barranco has worked with Union Park before, coordinating the construction of the Whole Foods-anchored Vintage Apartments complex in 2015. He believes that his existing relationship with the community will inform his plans for the O’Gara’s development.

“We have proven that we are very [in]vested in the neighborhood,” Barranco wrote in an email to The Mac Weekly. “We take a great deal of pride in doing active community outreach and making sure that neighbors and project stakeholders are part of the development process.”

While construction will likely not begin until the fall, O’Gara’s and Ryan Co. are beginning the community engagement process later this month with a presentation to the Land Use Committee of the UPDC on March 19.

Executive Director of the UPDC and former member of the Land Use Committee Julie Reiter said the community is concerned about increased traffic and parking as well as the loss of a historic building.

“I know there are a lot of neighbors who are concerned about the loss of the building itself,” Reiter said, “but I think one thing that can be done is the developer can do a really good job on the exterior of the building to make sure it fits the character of the community.”

As for traffic, Reiter thinks there are a number of things the complex can do to decrease the stress of an already-busy intersection, like offering free or reduced transit passes and installing of bike parking.

Reiter was also involved in the installation of the Vintage Apartments complex, and is hopeful that projects like these will deliver much-needed housing inventory to Union Park.

Despite the changing neighborhood, O’Gara is confident that the new developments will stay true to the restaurant’s character.