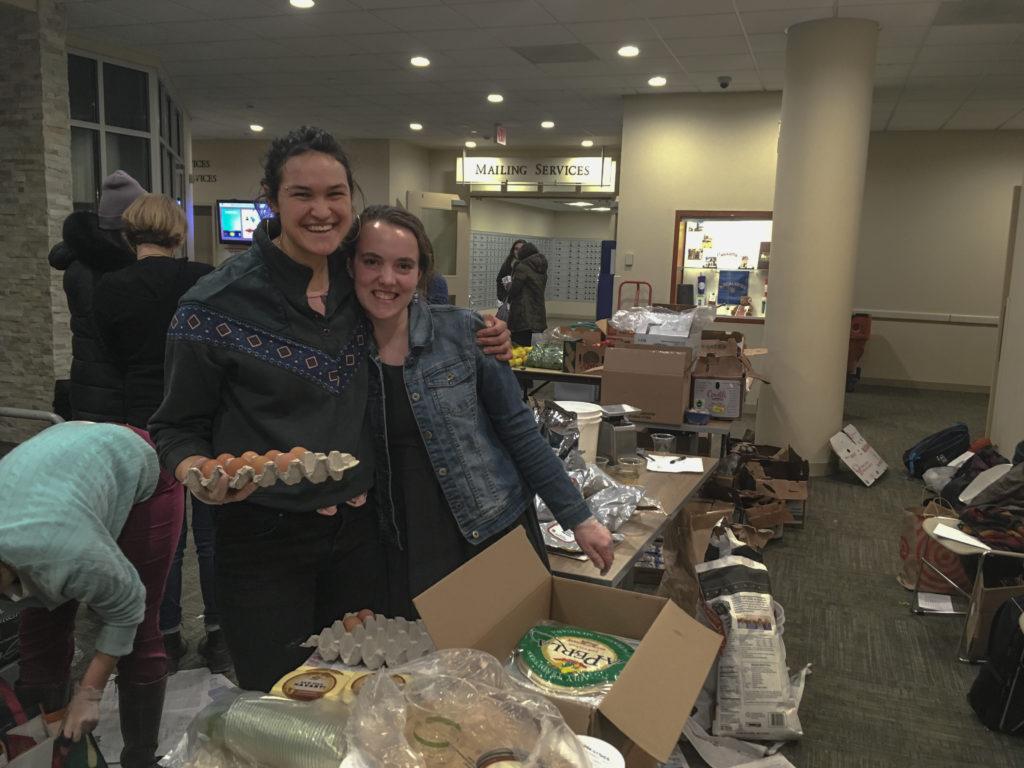 On Friday Feb. 9, students gathered in the lower level of the Campus Center to participate in the first distribution of locally-sourced organic food and produce from the MacSHARE grocery cooperative – a project three years in the making.

MacSHARE buys its food in bulk from Co-Partners Warehouse on Vandalia Street in St. Paul, and then redistributes it to students and community members at a reduced price.

Art department coordinator Kristi Fackel has worked closely with MacSHARE throughout its development.

“All the bulk produce is organic, and much of it is locally-grown,” Fackel said. “A lot of things that you could buy through Co-Partners Warehouse are local… I know those things matter to Mac students.”

The student-run co-op filled 82 orders placed by students and community members in the preceding weeks – a cumulative $3,266.60 of food. According to Fackel, the demand is a sign of things to come.

“It’s already become really clear that we’re gonna need a space for this, because so much food was ordered,” Fackel said. “It’s exploding. Initially the students wanted to do a really incremental ‘let’s just do 3 items this time, 5 next time’, and [Entrepreneur-in-Residence] Kate Reiling and I were like, ‘no, we just need to see what people really want. Let’s try to open it up as much as we can’.”

The concept of a Macalester-based grocery co-op was first developed by Elston Tortuga ’19 in the summer of her first year at Mac. After working closely with MacFEAST – a student organization dedicated to rethinking food culture – Tortuga worked over the summer of her sophomore year with the Cooperative Food Empowerment Directive (CoFED), an organization dedicated to helping college students start on-campus cooperatives.

“It’s something I’ve been working on since first year, basically, with that CoFED application,” Tortuga said. “But then second year, I was the RA of the veggie co-op, so I was very involved in cooperatives just by living in one. Then I worked on it as project for social entrepreneurship with Kate Reiling the next fall.”

The initiative gained momentum last semester, when Tortuga began working for the Sustainability Office and was able to dedicate more time and energy to working on launching the project. Tortuga was surprised by the level of support for the project.

The Bon Appetit staff in particular have offered their assistance in more ways than one.

“Bon Appetit has been super supportive and helpful,” Tortuga said. “We were worried if they said that we couldn’t sell food on campus.”

In addition to providing valuable storage for the time prior to distribution, Bon Appetit has agreed to buy much of the food MacSHARE is unable to sell. After last week’s sale, Bon Appetit purchased $1,432.30 of MacSHARE food.

“With the many issues of the food system, conventional industry hasn’t caught up to drive long-term improvements yet,” Bon Appetit Executive Director Kent Buell wrote in an email to The Mac Weekly.

Tortuga also had to find a way to make ordering from MacSHARE easy and accessible for students and community members. With the help of Financial Systems Specialist Aimee Baxter, MacSHARE developed an ordering site via the Marketplace application.

Financial Systems Specialist Aimee Baxter, who helped design MacSHARE’s ordering site, thinks a student co-op will be a helpful development for the students – especially for students not living in the dorms.

“I know somebody who lives walking distance from the campus but I know she makes a lot of effort – to get an Uber or whatever – to get to the grocery store,” she said.“This seems like a really nice solution for people who are living close that may not have transportation otherwise.”

Hannah Shumway ’19 ordered food from MacSHARE during last week’s pilot, and was impressed by the affordability.

“It was really nice because it’s also a way to get cheaper produce, which can be expensive at a place like Whole Foods or Trader Joe’s,” Shumway said. “It’s cool because they can buy in bulk and that way it’s cheaper for everyone. I know my roommate and I got a ton of stuff and spent 20 bucks.”

Tortuga, who is abroad this semester, was disappointed to miss MacSHARE’s successful debut.

“It makes me kind of sad to not be there,” Tortuga said. “But I’m really grateful that this is what happened, because last semester I kept thinking ‘I don’t know how to make this not my project’, and the whole point of a co-op is that it belongs to everyone and everyone’s contributing… I actually think it’s really good that I’m abroad.”

While MacSHARE has had initial success, it has a long way to go before it meets the goals of its founders.

“We have a long-term vision of a campus grocery store, basically a co-op grocery that’s student-run,” Tortuga said.

That vision extends to broader thoughts on food and social justice.

“The mission that CoFED talks about is how co-ops can be anti-racist,” she said. “With the election, and all of the things that are happening in the world, I was like, I don’t know if food is really where attention needs to be… MacSHARE is a way for the Mac and Mac-Groveland community to build community around food.”

“We’re hoping to create an alternative food economy in which we support local, queer, and people of color farmers and food suppliers while also providing a source of food that is affordable and nutritious.”

The organization could also provide larger opportunities down the line for students interested in running a co-op or similar non-profit.

“Students could have their work-study jobs within the co-op, so that they would be learning how to run a co-op and just be working in it,” Tortuga said.”

“The vision of this space where people buy food is very many years down the line,” she continued. “There’s so much room for growth and development, and so I hope that it will change a lot in the coming years.”

MacSHARE will be distributing its next order on Thursday, Feb. 22 in the Campus Center basement.