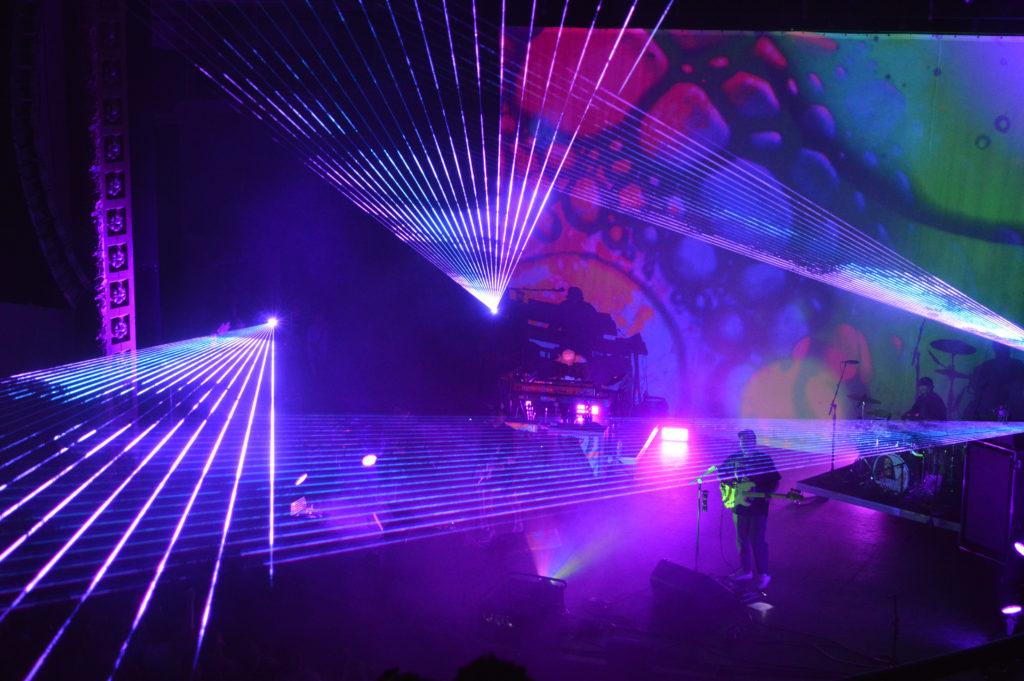 Portugal. the Man performs in front of a humorous projection for a packed audience at the Palace Theatre. Photo by Betsy Barthelemy ’21.

During the second song of their Feb. 9 sold-out performance, the screen behind St. Paul’s Palace Theatre’s weekend feature read “We are Portugal. The Man! Just making sure you’re at the right concert.” For a band that’s been releasing music for over fourteen years, you’d think this banter would be unnecessary. Yet, it proved to be a relief for the audience that stayed for the main performance after a chaotic opener.

Preceding their set was indie-rock band Twin Peaks, who proudly told the roaring audience that this was their first night performing on the tour. This fact proved regrettably obvious: the crowd’s energy turned out to be too much of a stimulant for the promising group. With amplifiers turned up much too loud for the struggling microphones, which at one point loudly squeaked under the unchanging volume from the four singers, barely any individual elements from any song were discernible from the next. Only upon listening to their recorded music later was I able to recognize the melodies of “Midnight Breakfast” and “Keep It Together,” among others. If nothing else, though, after they left the stage, nobody could say they didn’t look like they weren’t having the time of their lives up there.

Such a rocky start to a concert is disheartening, sure, but Portugal. The Man’s loyal fanbase knew to stick it out for the main event. The band’s trip to Minnesota’s capital city was widely anticipated after their four-year hiatus — unusual for a group that has otherwise released an album about once a year since 2006. Hailing from Alaska, the band has been perfecting their newest release, Woodstock, since 2014, even shelving another project in the process. Such a prolonged break could easily prove detrimental to a rock band with only a decent following. In the case of Portugal. The Man, though, the grit translated into the hip-hop-inspired alternative rhythms of Woodstock yielded the opposite effect. “Feel It Still,” the album’s fourth track, earned the band two incredibly high honors: a Grammy Award and a place on President Barack Obama’s “Best Songs of 2017.”

Fans ranging from seven to 60 years of age, clad in t-shirts from the band’s previous tours or this one, which read “I Liked Portugal. The Man Before They Sold Out,” pushed the Palace’s barricade to its limit in the short break between the opener and the main event. Without a guitar or singer in sight, the band’s cover of Metallica’s “For Whom the Bell Tolls” rang over the Palace’s speakers, the first notes of which were almost completely drowned by thankful cheers. Unfazed by the empty stage, the crowd continued to cheer and sing along until bassist Zachary Carothers walked out, closely followed by the four other members, including lead singer John Gourley. The screen behind them read “APPLAUSE,” then “We are not very good at stage banter, so tonight’s performance will feature some commentary written by our management. Thank you for your continued understanding.” Carothers took the microphone to introduce the group. The screen dissolved into a bubbling tie-dye effect and he led the band into “Purple Yellow Red & Blue” from 2013’s Evil Friends.

Contrary to their openers, Portugal. The Man’s live music held true to the balanced-yet-rebellious dance hits the audience knew and loved, grouped with fantastic lighting effects, artistic projections across the background and, yes, hilarious banter during instrumental solos. Old standards like “Atomic Man,” “So American” and “Hip Hop Kids,” among several others that flowed into one another, kept the general admission crowd in a constant wave. Those in the balcony frequently stood up against the wishes of Palace staff to feel the music as well. Hits from Woodstock prevailed, with “Feel It Still” and “Live in the Moment” in particular driving the energy. The band went over an hour without a break between pieces, the climactic point of which was a solo by Carothers, who danced across the stage with his bass. As he struck the last chord, the stage abruptly blacked out, apparently ending the set, and an old-fashioned “please stand by” projection across the back wall.

Carothers returned after a few minutes to bring the banter from the screen to the stage, looking across the crowds of the old theatre. “It’s so cool to be in the Twin Cities and play this space. We love these cities — both of them.” The crowd clapped especially loudly at this. “We’ve been coming here for a long, long time.”

The rest of the band returned to their roaring fans to play one more song: a medley of their standards — In the Mountain in the Cloud’s “Sleep Forever,” Evil Friends’ “Smile” and the classic “na na na” section of the Beatles’ “Hey Jude.” The performance was accompanied by a stunning light show. Not a single person in that crowd, young or old, could help singing along, evoking a sense of community in the sold-out theatre that, just under two hours earlier, had been full of confused concertgoers. With such a strong presence, Portugal. The Man’s tour only needs a sound check on the openers to be spectacular. And after years of rising in fame, it’s what the band deserves.