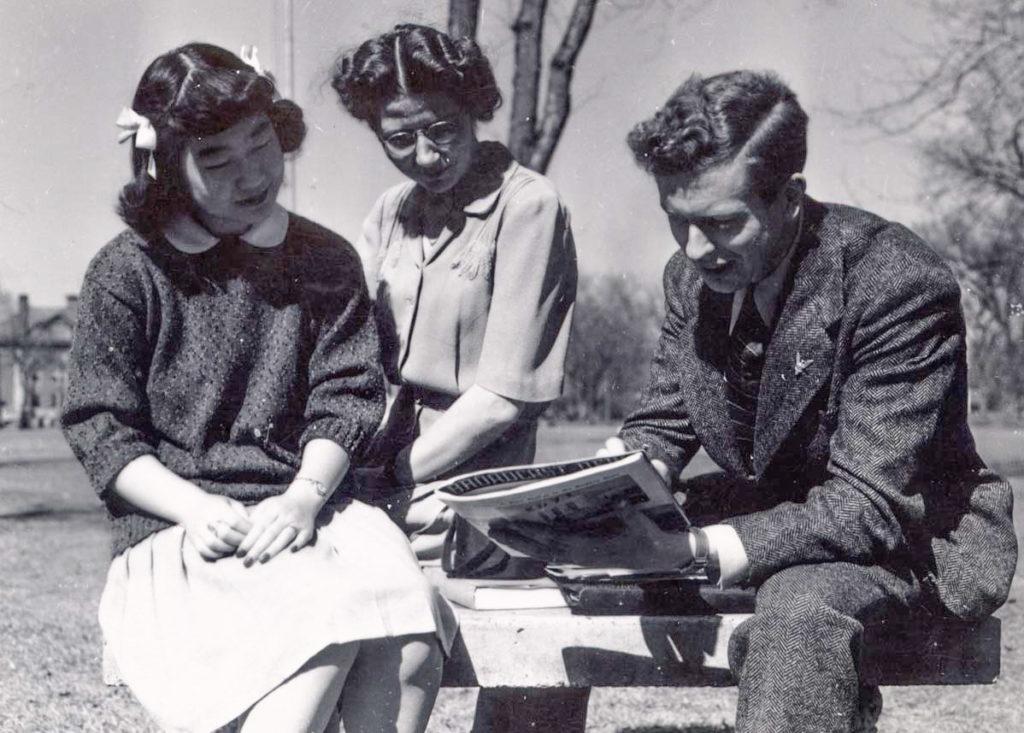 Founder Esther Suzuki with a group of friends during her time at Macalester. Suzuki graduated from Macalester in 1946 and is remembered, along with Catharine Lealtad, with the Lealtad-Suzuki Center. Photo courtesy of Macalester Archives.

The Mac Weekly is continuing its profiling of some of the illustrious founders that we commemorate on Founder’s Day.

Esther Suzuki is another Macalester founder and woman of color who helped build Macalester’s principles of multiculturalism and service. Suzuki was the first Japanese-American student to attend Macalester. One year after the attack on Pearl Harbor, Suzuki and her family were forcibly placed in detention camps in Portland, Oregon, the city she had lived in her entire life. Suzuki, her parents and her two sisters had to pack their lives into two suitcases each and relocate to living quarters made of horse stalls. Her acceptance into Macalester proved to be her way out, even though it meant leaving her family—who was to be moved to a permanent internment camp in Ohio—behind. She was permitted to attend Macalester because it was in the Midwest (which was not a “defense zone”) and a rare school that permitted students of Japanese descent. In September 1942, just two hours and fifteen minutes before Suzuki was scheduled to be moved to the internment camp with her family, she received a telegraph and was released to attend Macalester. It was a day she later described as the happiest of her life.

She was joined at Macalester by five other Japanese-American students, including her future husband, George Suzuki, who was drafted in 1944 even as his family was in an internment camp. Suzuki graduated with an honors degree in sociology in 1946 and after her children were grown, became the only social worker of Asian descent in Ramsey County at the time. During the first wave of Southeast Asian immigrants to Minnesota in 1975, Suzuki worked to obtain basic resources from organizations such as the Japanese American Citizens League and took courses in Hmong. She afterwards reflected that she was glad she “was at the right place at the right time” because there had been no such figure to help her parents when they immigrated to the United States. Later, Suzuki became an accomplished writer and storyteller, contributing a chapter to an anthology titled Reflections: Memoirs of Japanese American Women in Minnesota, as well as writing for the Journal of the Asian American Renaissance. A play inspired by her life story, “Internment Voices,” premiered in 1998.

The Macalester College Alumni Association acknowledged her contributions to the school’s emphasis on multiculturalism with the Alumni Service Award and the Trustees Award for Meritorious and Distinguished Service in 1998. She worked with the Alumni Association to promote inclusiveness and diversity for decades, particularly by recounting her experiences as a Japanese-American woman. She died in 1999. In Kagin Commons, the Lealtad-Suzuki Center is named in commemoration of her and Catharine Lealtad’s (the first African American student to attend Macalester) legacies.