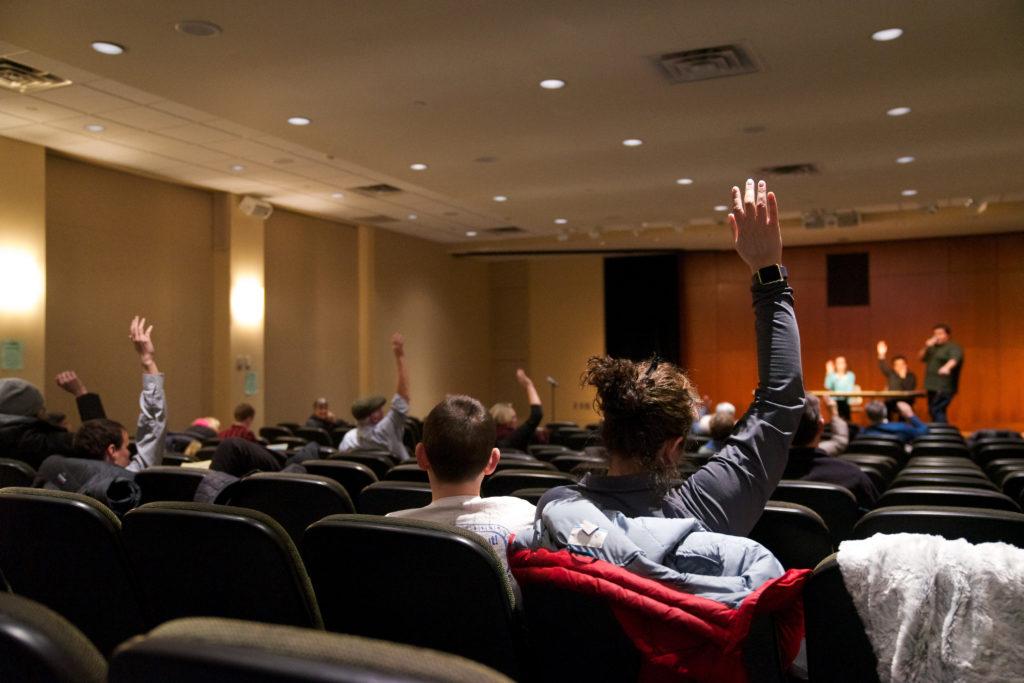 DFL caucus-goers volunteer to serve as delegates to their District Convention in March. Rebecca Otto and Erin Murphy finished one-two in the gubernatorial straw poll taken at this precinct, but Tim Waltz won the vote across the state. Photo by Ally Kruper '21

Abe Asher
Macalester’s John B. Davis Lecture Hall (JBD) played host to the Democratic-Farmer-Labor (DFL) party on Tuesday night, as voters gathered here and across the state to pass resolutions, volunteer as delegates and participate in straw polls for governor at precinct caucuses.

With incumbent DFL Gov. Mark Dayton not seeking a third term, the preference vote in the open governor’s race was a chief focus.

Along those lines, it was a good night for Rep. Tim Walz. The southern Minnesota congressman underlined his status as the favorite in the DFL race with a commanding statewide victory – winning 31 percent of votes cast to State Auditor Rebecca Otto’s 20 percent.

However, at the Macalester precinct, Ward 3 District 7, the tables were turned: Otto received 14 votes from the 52 caucus attendees, state Rep. Erin Murphy finished second with 10 votes and Walz and former St. Paul mayor Chris Coleman tied for third with 7 votes each.

State Reps. Tina Liebling and Paul Thissen received minimal support, while a handful of voters remained uncommitted or did not fill out a preference ballot. Thissen dropped out of the race on Wednesday.

The precinct caucus in JBD was chaired by Marco Hernandez ’19, while two other Macalester students – Jane Roarty ’20 and Karinna Gerhardt ’20 – were elected as associate chairs.

Hannah Hill ’20 arrived too late to participate in the straw poll, but came away with a particularly positive impression of one candidate.

“I like Otto,” she said. “I liked her combination of education stuff, and on her campaign site she talked about equity [where] most of the other candidates talked about equality, so it seemed like she was a little bit more cognizant of things.”

Hernandez, in his personal capacity, is supporting Walz. “Looking at Minnesota right now – and Republicans winning in greater Minnesota and seeing Tim Walz from a more conservative district, as a Democrat, bipartisan, a veteran, it’d be more feasible for him to be a viable DFL gubernatorial candidate.”

Walz might be a pragmatic choice. The first congressional district was a Republican stronghold for nearly two decades before he was elected in 2006. It favored Donald Trump by 15 points in 2016 while re-electing Walz by less than one.

In Congress, the former geography teacher and high school football coach was known as a moderate: a staunch defender of LGBTQ+ and women’s rights who also had an “A” rating from the NRA and voted in 2015 for the American SAFE Act – a proposal that would have effectively made it more difficult Syrian refugees to gain entry to the US.

Since announcing his candidacy for governor, though, Walz has shifted to the left.

He pledged to donate his NRA campaign contributions to charity after the shooting in Las Vegas in October, softened his position on refugee admittance, and named a progressive state representative, Peggy Flanagan, as his running mate.

“I’m looking at it from a place where we need another DFL administration,” Hernandez said, “and with the demographics of the state, I think [Walz] makes sense.”

“He’s running really explicitly with the aim of uniting different parts of the state,” Jarka-Sellers said. “At a time where there is extreme polarization based on geography – and in an atmosphere where Republicans have exploited that – I think that [he is] making a concerted effort to say ‘we’re not going to have people in different parts of the state be pitted against each other.’”

For Jarka-Sellers, Walz’s pro-gun congressional voting record isn’t a sticking point. “He was representing a rural district where a lot of people own guns and have a different view on issues surrounding guns, and he represented the people of his district pretty faithfully,” Jarka-Sellers said. “I think that he is genuinely committed to common sense gun reforms, and I think he’s going to pursue them as governor.”

But neither Jarka-Sellers nor Hernandez were surprised to see Otto – a member of the Macalester class of 1985 who has won three straight statewide elections – carry the preference vote in JBD on Tuesday night.

“Being endorsed by Our Revolution in a district that during the 2016 primary went extremely for Bernie Sanders, it does not surprise me at all,” Hernandez said.

“I felt like she really had a solid grasp of the issues that people deal with,” Roarty said. “She seemed to know how to ask questions to really get at the root of a problem.”

The straw poll is nonbinding and its winners – notably R.T. Rybak in 2010 and Marty Seifert in 2014 – have often failed to ultimately secure their party’s nominations. Whichever candidates eventually emerge, the DFL has reason to be optimistic: its turnout on Tuesday was nearly triple Republican turnout.

The gubernatorial race was not the only item on agendas across the state on Tuesday.

Another resolution, introduced by Sam Greenstein ’19, asks that the DFL support legislation to allow Minnesota residents to identify as gender-neutral on their driver’s licenses, following the example set by Oregon last June. It too received unanimous support.

Hernandez was pleased with how the night unfolded.

“At first I was nervous – just, like, I need to remember this, this, this – but tonight went really smooth,” he said. “I was really happy that we got exactly 23 delegates without any competition whatsoever.”

Of those 23 delegates, who will report to the DFL District Convention on Mar. 23 at Central High School and consider resolutions passed at caucuses throughout the area, 11 are women, 11 are men and 1 is non-binary.

“It’s a great experience,” Hernandez said of chairing the caucus. “I’m glad it went the way it did. It was probably the best-case scenario here.”