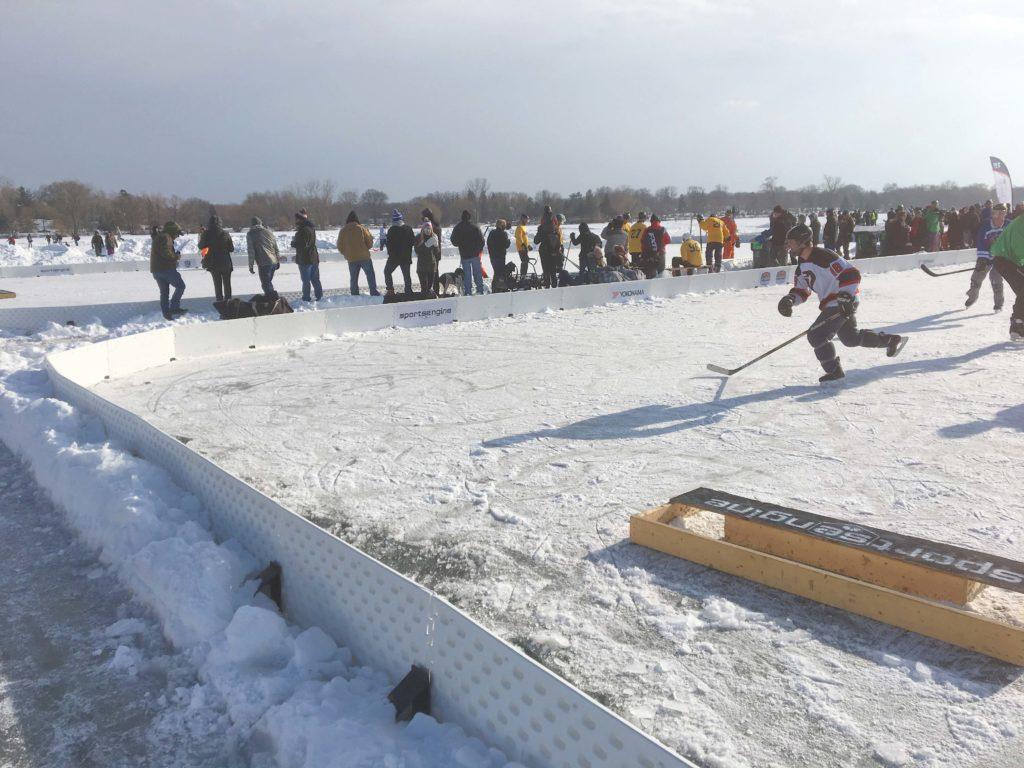 The U.S. Pond Hockey Championships attracted teams from a variety of different locations and skill-levels. Photo by Liam McMahon ’20.

Liam McMahon
To those who grew up playing the game, there is nothing quite like pond hockey. The stereotypes of organized youth hockey are myriad: helicopter parents litter rinks across the country, putting too much pressure on young players who must spend exorbitant amounts of money just to have the requisite equipment to play. However, on ponds and backyards across the U.S. and Canada, there are kids who learn to play the game in a simpler, carefree way. For these kids, many of whom learned to skate almost as soon as they could walk, there is nothing quite like strapping on skates, shoveling snow off a pond and playing pickup hockey with friends and family.

There is a special place in Minnesota for kids like that who never grow up. For four days, from Jan. 25-28 on Lake Nokomis in Minneapolis, those kids who never grew up could feel 10 years again at the 13th annual Labatt Blue U.S. National Pond Hockey Championship. Started in 2006, the Championship accommodates players of all ages and skill levels. With 25 rinks on Lake Nokomis, it is possible to watch Sled Hockey on one rink, former Olympians in the Women’s Division on another, men with the enthusiasm (and talent) of boys in the Rink Rat Division and former professional men’s players in the 40+ Division all at the same time.

Attending the tournament is the most Minnesota activity possible in the State of Hockey™. While getting out to Lake Nokomis from Macalester is not a straightforward proposition — it takes almost an hour between two buses and a significant walk –it is well worth the trip.

The neighborhood around Lake Nokomis, a residential area in South Minneapolis, provides the perfect backdrop for the tournament. Like so many pond hockey rinks, the lake is used for other things at different times of the year; through the winter, it’s a place for people to walk dogs and socialize.

While the setting helps make the tournament by taking the players back to their roots, the special part is what happens on the ice. The tournament is a family affair; from toddlers on skates to gray-haired competitors, the generational diversity is quite remarkable. So, too, is the geographic diversity. The tournament draws in teams from all across the country, and it shows on their jerseys. Teams proudly proclaiming their allegiance to Bobby Orr, the Hartford Whalers and the state of Indiana were easily identifiable across the rinks. Although the tournament is officially the U.S. Pond Hockey Championships, there was a strong Canadian presence, as attested to by the group of 20- and 30-something men wearing red maple leaf-emblazoned jerseys calling themselves “The Eh Team.”

Watching a game from start to finish is quite the experience. Teams play two 15-minute halves, and prepare their own ice. Teammates take turns skating around with a snow shovel to remove as much snow as possible before a horn sounds to signal the game’s start. Rather than having goalies, on each end of a rink there is a hollow wooden box with two puck-sized holes on one side. That side faces towards play, and any puck that goes through a hole counts.

Not all rinks are created equal. Some have a pristine sheet of ice, on which the only blemishes are the marks of skates. Others have large chunks where the ice has started to chip, forcing players to halt and remove the puck with their hands should it wind up there. Just like the rinks, the games are not all of the same quality. There are three divisions for men under-40: an A/B level, a C level, and a D/E level.

The top level features former professional and collegiate players who look like they have the puck on a string. Checking is not allowed, so the players at the highest level can skate without fear, executing crisp passes and dekes like kids still dreaming of lifting a Stanley Cup. At the other end of that spectrum is the Rink Rat Division, for players at the D/E level. These players are likely to wipe out at some point.

While the players clearly want to win, they are also always aware of what makes the game great off the ice. From the hockey hair to the kids jumping onto the ice during halftime and the Stanley Cups made of beer cans, everyone relishes the chance to experience what made them enjoy hockey in the first place.

Away from paying hundreds of dollars to see the Wild or getting up at four in the morning to drive to a tournament hours away, these players were doing what made them first fall in love with the game. Despite the corporate logos and the Labatt Blue Zone, for everyone playing Lake Nokomis might as well have been the pond at their local park growing up.

The game as it should be, in the State of Hockey ™.