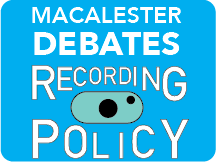 This is an extended version of the story that ran in the print edition of The Mac Weekly on Feb. 2.

On Jan. 25, 2018, Macalester’s Education Policy and Guidance council (EPAG) met for a preliminary discussion of a proposed new policy on audiovisual recordings in Macalester classrooms.

The policy was written last fall by students as part of Information Policy, Politics, and Law, a political science course taught by department chair Patrick Schmidt.

“Patrick Schmidt contacted me at the end of the summer to let me know that the political science Department was planning on creating a policy for the department, and that it struck him that departments [probably] shouldn’t be doing these things in isolation,” Provost Karine Moe said. “He offered that the students in his class undertake the research, and I thought this was a great idea.”

The proposal denotes four key reasons for the development of a universal campus recording policy.

First, the policy recognizes that the use of recording devices in the classroom “increases the stakes for creating intellectually open campus environments.”

But recordings of students or professors circulated outside of the classroom are open to abuse. The proposal cites websites like Professor Watchlist and Campus Reform, which target liberal professors by publicizing private classroom recordings that exemplify their political bias.

“Recordings are so easily circulated, they have a lot of different potential negative and positive uses,” Information Policy class member Abbey Feola ’17 said.

“There are a lot of websites right now that are relatively well-known that post excerpts and reports from professors, and then talk about how colleges are brainwashing people into becoming liberal,” Feola continued. “It’s a heated conversation.”

A second and closely related motivation for developing a universal policy is the general privacy interests of faculty, staff, and students.

“If you are in a classroom and discussing delicate subjects, or exploring your ideas on race, gender, sexuality, or whatever, you would expect that it’s not going to be posted on the internet,” Schmidt said.

“The classroom is sort of a sacred space to some, where one can raise an idea in hypothetical without being attacked,” class member Louis Hunter ’18 said. “I don’t think students want to be taken out of context any more than professors do.”

Other driving factors behind the proposed policy include intellectual property rights – most prominently concerning professors who wish to distribute recorded lectures for profit – and accommodating students with disabilities.

“Lewis and Clark [College] has a really good rule, and has been very clear about the need for a statement that says, ‘you shouldn’t be recording in secret in the classroom’,” Schmidt continued. “Other schools have been much more concerned about intellectual property – at big universities, where professors are trying to monetize by selling lectures or online classes, there have been concerns about who actually owns the lectures.”

These differing priorities provided a foundation for the class’s preliminary research.

“First we looked at other colleges and universities’ recording and information policies that were available online,” Feola said. “We specifically tried to look at [policies] of peer institutions, other small liberal arts colleges, but we also considered institutions that are larger, or more prestigious, or less prestigious.”

“We just sort of came up with stuff we liked, and stuff that we thought made sense,” Hunter said.

“The process of creating this went beyond after classes ended, and I was not so involved in the post-semester process, but Professor Schmidt was, so there was lots of input from him as well,” Hunter continued. “In the end, the final proposal was crafted as a partnership between us and Professor Schmidt, which then goes to the administration for their approval.”

“Now, hopefully, it will go through EPAG and maybe bring in wider campus concerns that we might have missed,” Feola said.

On Jan. 19, Schmidt presented the final proposal to Macalester faculty and staff as a part of the weekly “Talking About Teaching” series, and opened the topic up for discussion.

“I think one faculty member described it as ‘very student-centric’, and I think it is,” Schmidt said.

“The core part of the rule is where it sets out there are three kinds of accommodation,” he added. “One is disability accommodation. One is for expected long-term absences, so if you had a concussion, or were going to be away on a week-long field trip or athletic outing, that there be opportunity to apply or ask for recordings performed by a fellow classmate.”

“And then the third is sort of personal academic use,” Schmidt continued. “And this is true for both faculty and students. If a faculty member said, ‘I want to record my class, just so I can study them and learn about the pedagogy’ or if a student said ‘I would be better off if I could listen to these later’, it’s just trying to create a process by which there’s a dialogue and we’re clear about which kind of permissions can be granted.”

EPAG now has the opportunity to deliberate on proposal’s details of the proposal and develop a consensus solution.

“We are now looking at the proposal and report that they prepared,” EPAG Chair Cynthia Kauffeld said. “We’ve had one preliminary discussion and we’ll have more conversation in our subsequent meetings, and we’re in conversation with the administration, the provost, [people] who sit on EPAG, and we’re looking to get some greater faculty input.”

Though the process of reviewing the proposed policy is underway, the date of its final passage and implementation is uncertain.

“These things don’t move super quickly, because we meet once a week and there’s time between our conversations,” Kauffeld said. “I think there’s momentum and there’s interest in working on this efficiently, but I can’t say how long it will be.

Despite its uncertain timeline, Moe and Kauffeld appreciated the students’ efforts in writing the policy’s preliminary proposal.

“One of the things I think is so great about the students’ participation in this is that whenever you have a policy that comes up from the students and from the faculty, everybody buys in,” Moe said. “So it makes for better policy in that sense. I also thought it was a perfect project for that particular class.”

“I think the students have done a tremendous job doing the initial legwork, and looking at the considerations that a policy like this should take into account,” Kauffeld said. “They did a great job, and they learned, I think, through the process, how to look at this from all angles and not just from the student perspective,”

“I feel like they provided a well-rounded approach to the topic.”