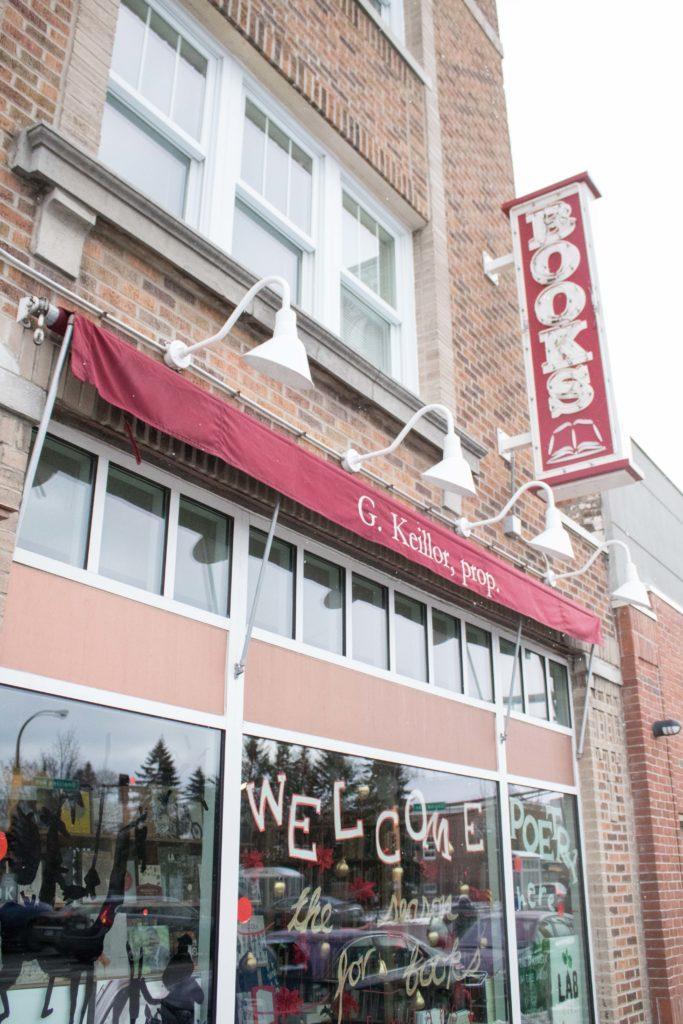 Common Good Books, at the corner of Grand Avenue and Snelling Avenue, frequently hosts events in collaboration with Macalester. Photo by Noah Zwiefel ’19.

On Thursday Nov. 30, amid allegations of sexual misconduct, Minnesota Public Radio (MPR) cut ties with Garrison Keillor, the creator and longtime host of “A Prairie Home Companion” and one of Minnesota and public radio’s most recognizable figures.

A St. Paul native and resident, Keillor’s connections to Macalester are both historic and current.

Keillor produced the first live broadcast of “A Prairie Home Companion” from the college’s Janet Wallace Auditorium in 1974, and returned two years ago for a special 41st anniversary edition of the show.

Keillor has also served as a Macalester Convocation and Commencement speaker, and once read bedtime stories in the Center for Religious and Spiritual Life as a stress-reliever during finals.

Common Good Books moved into the space in 2012 after outgrowing its original location below Nina’s Cafe in the Cathedral Hill neighborhood of St. Paul. Macalester reportedly spent $1.2 million to refurbish the Lampert Building around the time that the bookstore moved in.

As part of its relationship with the college, the bookstore occasionally hosts events on the Macalester campus.

Keillor himself has hosted these events, including a number of poetry contests that took place in Weyerhaeuser Memorial Chapel. Just last month, a Common Good Books event with author Peter Edelman was moved from the store to the John B. Davis Lecture Hall in the basement of the Campus Center.

The day before he was fired by MPR, Keillor published a vigorous defense of Sen. Al Franken (D-MN), also accused of sexual misconduct, in The Washington Post.

For failing to disclose that he was himself under investigation for sexual misconduct, The Post announced last Thursday that it will no longer publish Keillor’s columns. According to MPR, Franken is, as of Wednesday night, expected to resign his Senate seat.

Though he has contested the allegation against him, Keillor’s scheduled tour dates have been cancelled while MPR has announced that it will no longer rebroadcast the Keillor-hosted episodes of “A Prairie Home Companion”. It plans to rename the show, which is now hosted by musician Chris Thile.

The future of the bookstore at the corner of Grand and Snelling, however, seems safe for now.

In a statement to The Mac Weekly, Macalester Vice President of Administration and Finance David Wheaton wrote, “Macalester is saddened by the news about Garrison Keillor shared last week by Minnesota Public Radio (MPR).”

“Keillor’s bookstore, Common Good Books, opened its Snelling Avenue location in 2012, in space leased from Macalester. The college has an existing and ongoing lease with the bookstore.”

When asked whether Macalester was reevaluating its business relationship with Keillor in light of the allegations, Wheaton replied, “At this point, we haven’t had a conversation about that subject.”

Though Keillor owns the bookstore, he is not involved in its day-to-day operation. Common Good Books currently employs twelve people – one of whom is a Macalester alumna – and is loved both by Macalester students and the broader Macalester-Groveland community.

“I think Common Good is super beneficial to Macalester students in terms of bringing in speakers and events and things,” Makayla Barker ’20 said. “So it would be disappointing if that relationship were to come to an end.”

Zeena Fuleihan ’18 was of a similar frame of mind.

“I think that Common Good Books as a neighborhood bookstore – not considering the fact that Garrison Keillor owns it – has a really special place in the Twin Cities literary community,” Fuleihan said. “It’s also very special for Mac because a lot of professors have book releases there and alumni do as well.”

“The bookstore stands for a lot more than what Garrison Keillor stands for,” Fuleihan continued.

Some, however, would like to Macalester take a stand – both against the behavior that Keillor is accused of, and, more broadly, on who it chooses to provide with a platform.

“I expect and challenge Mac to speak out against Garrison Keillor and cut ties with his bookstore,” Claire Johnson ’12 said. “Any bookstore that has to do with Garrison Keillor will not reflect the views of Macalester, at least not as well as another person could.”

“The recent allegations against Garrison present Mac with an exciting opportunity to facilitate conversations about whose voices we in the Mac community believe and amplify – women, victims of sexual assault, POC, marginalized people in general,” she continued, “versus who needs to take a seat in 2017.”

Common Good Books, for its part, is pressing ahead.

“Common Good Books isn’t commenting on recent events,” bookseller Aaron Rosenberg wrote in a statement to The Mac Weekly. “We are focusing on selling books during this busy season.”