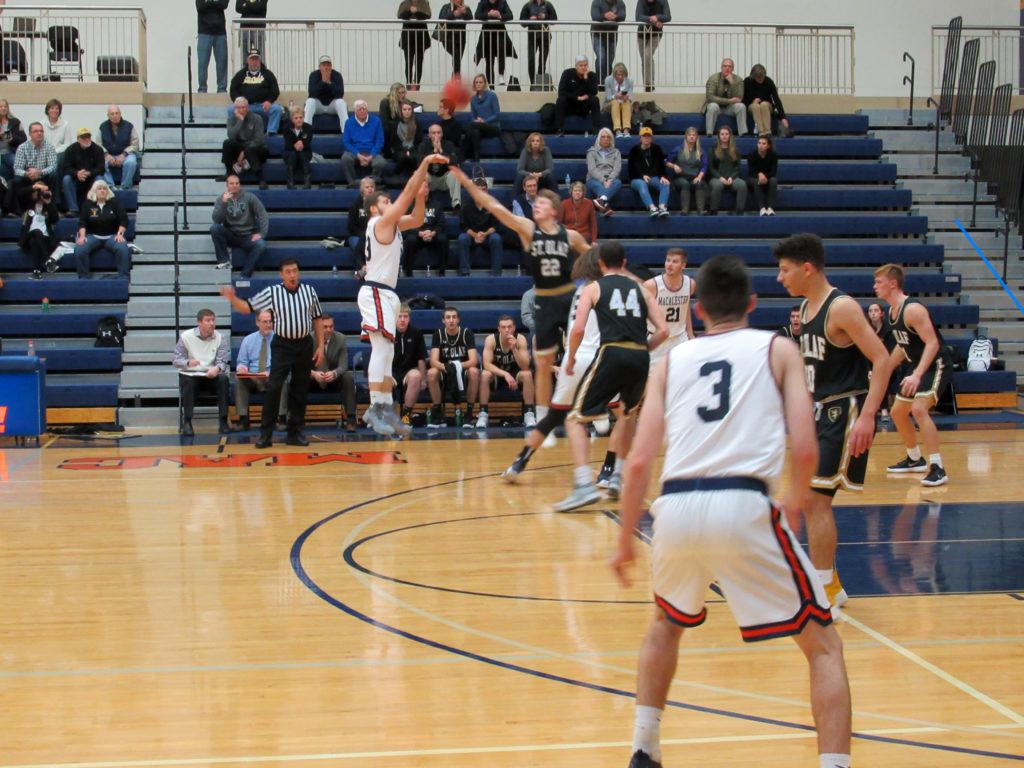 Before the 2017-18 Macalester Men’s Basketball season started, the Scots were dealt a massive blow when guard Michael Gutierrez ’19 went down with a torn ACL. The junior led the Scots in scoring last season at 21.6 points per game and earned Second Team All-MIAC honors for his strong play. However, missing him and battling through the other injuries the team has dealt with so far this season has not dampened the players’ resolve to contend throughout the season.

“Just like every other season, we go in with the mentality that we can compete with any team on our schedule, and this year is no different,” Gunnar Goeden ’18 said. “We are a younger, less experienced team this year, having graduated many senior leaders and suffered some unfortunate injuries, but our returners and freshmen are up to the challenge. We are looking forward to seeing what this team is capable of this season.”

Other Scots echoed this message, including Brett Olson ’18.

“I’ve really seen a lot of dedication to the program,” Olson said. “Both the upperclassmen and the lower classmen as well. Everyone is putting up extra shots and [is] in the gym as much as they can with all the work that they have during the academic year. So the big thing I’ve seen is the dedication to this upcoming season.”

That dedication weathered a difficult start to the season when Macalester fell to Beloit College 90-68 and the University of Northwestern (MN) 66-55 in the year’s first two games. Looking for a win before MIAC play started, the Scots turned to Wyatt Ferm ’19, who leads the team in minutes played, points, rebounds, assists and steals per game. He helped make the difference on Monday, Nov. 27 when the Scots beat Northland College 71-64, pouring in 26 points.

Despite getting the headline on the Macalester Athletics webpage, Ferm was far from the only Scot who put in a strong performance against Northland. Jackson Henningfield ’21, Aidan Toner-Rodgers ’21 and Olson all scored in double figures, while Goeden added seven points, three assists and four steals. The contributions have come from different areas of the team, as both younger and more experienced players have taken steps forward to try and fill in the production they lost in Gutierrez, a fact the man himself seemed quite pleased with.

“It’s been exciting to watch guys step up into roles they otherwise might not have,” Gutierrez said. “Like, scorers– the guys that might be looking to score right away are having to do that, and guys [are] playing off of each other a lot more than they thought they would. So I think it’s been kind of cool to see everyone growing. As hard as it is to say, I think everyone’s growing from me being out, which is exciting then to watch.”

Goeden emphasized the importance of giving credit to everybody on the team, no matter how many minutes they play on the court.

“Everyone on our team is valuable and plays a critical role,” he said. “Everyone deserves recognition for what they contribute.”

The Scots entered the throes of MIAC action on Wednesday, Nov. 29 when they lost to St. Olaf 59-44. Their eyes now turn to future conference tilts, and they have games against Concordia-Moorhead, Saint John’s University and Carleton College to come before the players receive a break to take exams.

Last season, the Scots won five MIAC games, their best record since going 7-12 in conference play back in the 2006-07 season. Now, Macalester is hoping to take the next step, and build on last season’s success, with one eye on finishing in the top-six in the MIAC. A top-six finish would be enough to qualify for the MIAC playoffs, something that both Goeden and Olson hope to achieve this season. More than that, they hope to have an enjoyable season.

“The hopes in any sport are a chance at the postseason and that means coming in the top-six in the MIAC,” Olson said. “However, besides winning and losing I expect this group of guys to really compete and have fun together. We are such a close knit team that it’s just a blast playing a great sport with these guys. So winning or losing I think our expectations mainly are to compete and have fun.”

Macalester will return to competition on Saturday at 1p.m., when they host Concordia-Moorhead at the Leonard Center.