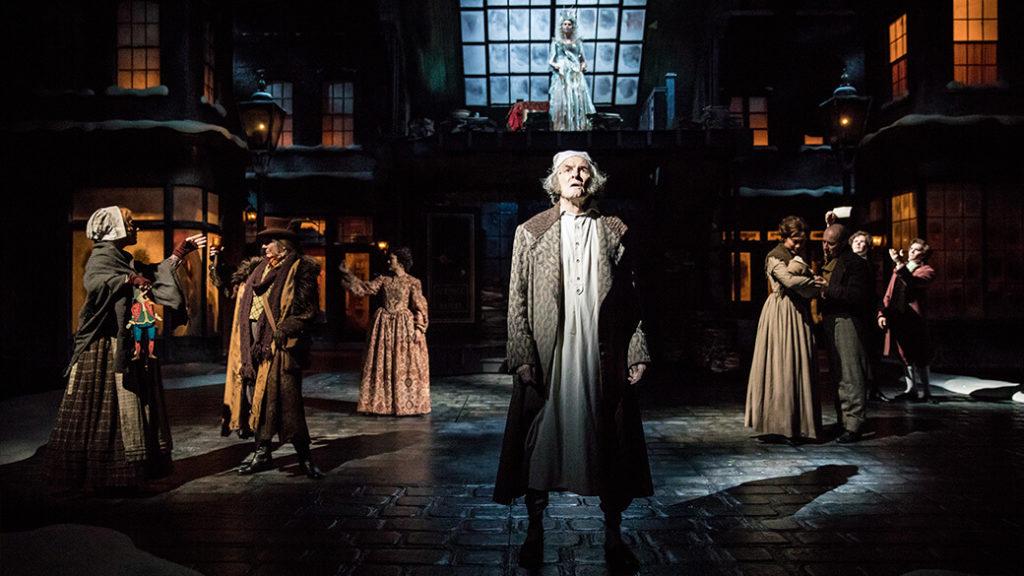 Remember the moment in The Sorcerer’s Stone when 11-year-old Harry Potter steps through a brick entrance at the back of the Leaky Cauldron pub, and finds himself in the marvellous Diagon Alley? Magic fills his eyes as he wanders, mesmerized, along the eccentric shops and colorful façades that border the avenue.

As I walked into the Guthrie’s Thrust Stage to see the theatre’s 43rd annual production of A Christmas Carol, Charles Dickens’s celebrated tale of greed and redemption, I felt like Harry entering Diagon Alley for the first time. In fact, I felt this way for most of the performance, bewitched by the great stage production, the compelling acting and the warm, dazzling musical numbers.

Unlike many attendees, it was my first time seeing A Christmas Carol, which might explain my childlike amazement. Being from France, I wasn’t even that familiar with the story, a classic of Anglo-Saxon literature that didn’t quite make it to the land of the brie.

The premise of Carol is simple: Ebenezer Scrooge, a grumpy, miserly old man too attached to his worldly possessions, is visited on Christmas Eve by three ghosts. One reminds him of the mistake he made in the past, another shows him people celebrating Christmas regardless of their wealth and the last presents him with death and despair, a certain fate for Scrooge should he pursue his avaricious ambitions. The following morning, on Christmas Day, Scrooge awakes a changed man, joyous, thankful and ready to redeem himself.

Although I was likely one of the few patrons unfamiliar with well-known characters like Scrooge, Mr. Fezziwig and the Ghost of Christmas Past, I wasn’t the only one enraptured by the spectacle. As the stage lit up, adults and kids alike were laughing, clapping and smiling. That’s the beauty of a holiday celebration; it brings people together, and lets them forget about their daily life to enjoy a time of happiness and festivities.

For Lauren Keating, the director, Carol has always been a family tradition, and she makes sure this sense of togetherness is recreated on stage. From the live carols strolling about the town square, to the jolly and colorful parties at Mr. Fezziwig’s, to the piano impromptu organized by Fred—Scrooge’s only living relative—Carol is filled with joy.

When Scrooge awakes on Christmas morning and goes out to meet everyone, an energetic and hilarious sequence ensues, as the old man strives to give back to the incredulous populace whose first instinct is to run away from him.

Much of what makes Dickens’ story work is Scrooge’s believable character arc and subsequent atonement. Scrooge is thus a difficult role to pull off, Keating explains in the play’s complementary program guide.

Yet Nathaniel Fuller, playing the greedy Ebenezer for the fifth time (plus twenty-two times as understudy), pulls it off. Fuller knows the part, and it transpires: his voice carries Scrooge’s grumpy presence effortlessly, and his delightful mannerisms are sheer entertainment. He almost knows the part too well, and at times lacks the spontaneity that could be expected when one meets four ghosts in one night (including Marley, Scrooge’s former business associate).

An exciting element to the casting of Scrooge this year is that of Fuller’s understudy, Charity Jones, who is set to play the demanding part on select performances. According to Morgan Holmes, Guthrie’s Artistic Assistant, “Scrooge is just a great role. That we would even think about gendering and limiting the casting of that role is strange.”

Another great performance is that of Leah Anderson, stirring yet subtle as Bell, young Scrooge’s wife. Meghan Kreidler and Kris Nelson are touching as Mrs. and Mr. Cratchit, supported by a talented cast of child actors playing their children. Ansa Akyea’s interpretation of the Ghost of Christmas Present is hilarious, as is Jay Albright’s turn as the jolly Mr. Fezziwig. Overall, the casting is excellent, and the actors dance, sing and seem to take absolute pleasure in communicating the sense of joy that makes the play a delight.

For all its gleeful moments, A Christmas Carol also boasts a great deal of spookiness, enhanced by the fantastic stage production. Starting with the apparition of the spirit of Marley, who warns the protagonist about the coming of the three ghosts, the play is at times bleak and chilling, creating a compelling contrast with the merry celebrations that punctuate the story. As Marley enters through a trapdoor on the floor of Scrooge’s home, the lights flash, the music swirls and an array of eerie figures comes floating about the stage, frightening both the poor Scrooge and many of the younger member of the audience.

Every piece of the production—the lighting, the music, the moving stage elements, the many hidden doors—works together to support the show, making this Carol feel like a Hollywood production. And like every good Hollywood production, the set design, here created by Walt Spangler, is wonderful.

The paved square, the snow, the old streetlights, the glimmering lights coming from the inside of the shops and houses, everything feels out of a winter fairy tale; a tale to which the audience is invited, thanks to the room configuration and the seats set at 180° around the stage. This unconventional set-up creates a sense of intimacy: the characters sometimes walk among the audience and the dances happen three feet from the first row. Actors and patrons share these joyful moments like a family shares a dinner at Christmas—or any holiday, for that matter.

A Christmas Carol runs until Dec. 30 at the Guthrie Theater. The performance is two hours with one intermission. You can get tickets at guthrietheater.org, and look out for discount options like rush tickets or the 30 Below club.