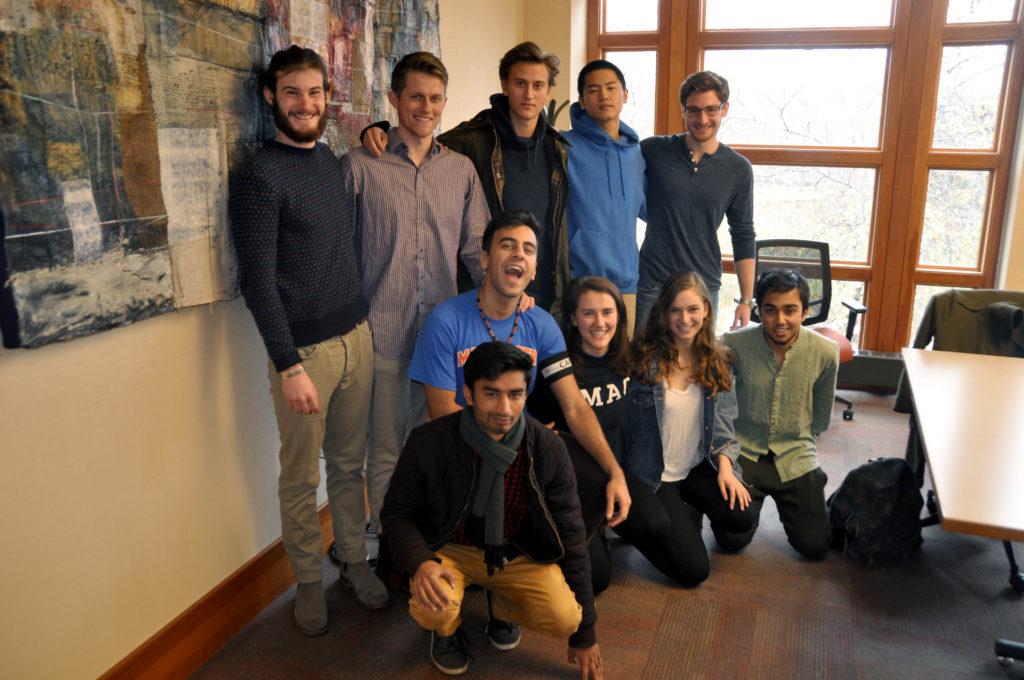 The Mac Weekly sat down with 10 of the 19 Vatican intramural soccer players. The scholars and athletes were still glowing from their win against their longtime rivals, The Mambas, and happy to share some secrets to their success.

TMW: Okay take me back to the beginning. How did the team start, who’s idea was it?

Kabir Sandrolini: You can trace the beginning back four years ago when some of us were just entering our careers here.

Johannes Davies: I would suggest that you could trace it back to probably the early first or second century of the Vatican state if we’re really pushing this.

Greg Zacharia: I think it began in the pleistocene age.

Haroon Malik: Are you sure that it didn’t exist this entire time?

KS: It was probably around the time…

Ahren Lahvis: Have you seen The Land Before Time?

KS: Okay that was my second guess.

TMW: So who wants to explain the name?

KS: A source of great controversy.

Hannah Viederman: Know what, take it away Kabir.

KS: Well I don’t want this to be all about me.

DF: Isn’t it named after your house?

RK: Okay not his house.

Johannes D: A lot of the team happens to live in the same house. And the house is sometimes referred to by that name.

RK: Which we do not recommend calling it that.

KS: No I recommend it.

DF: Because of the purity you guys spark?

KS: Yeah, we’re seen as a very spiritual people, very upright, and, some might say, chaste in the community. So we…

RK: Take that name off there.

KS:…chose a name to embody those ideals.

TMW: So obviously you guys won…

TMW:… how does it feel to win?

AL: I think it was expected. I don’t think adversity is really in our lexicon.

KS: I think for about six weeks we were playing the best football in the country, some might say the world.

KS: So that’s why it’s really tough to see the USA not make the World Cup given the talent we had at our disposal. But we chose academics above all.

RK: We are mostly international students.

KS: That’s true. Our scouting department is very strong. We have talents from Germany, Pakistan, India, Denmark and Uganda. Italian high school students. Talent from all over the place.

DF: Um, I have a question. Why did you win this year and not last year?

GZ: We did win last year.

KS: Make sure that gets in there.

DF: I feel very welcome here because I’m only an exchange student so this team was like family to me.

RK: Darian get the fuck out.

KS: That’s true we did have a cross scouting program with the University of Leiden. We sent them some of our best talents and we recruited Darian on loan for the season.

TMW: Nice. So who wants to walk me through that last game? That final, winning game.

DF: No actually, I wasn’t there. I was in Miami at the time.

HV: Yes Darian. Walk us through your weekend in Miami.

DF: But people were very nervous because the star player wasn’t there and that took away from the favorites position. And it was actually very sad because me and Joshua were level as goal scorers. We both had eight goals. And that was like the maximum anyone had. And then I wasn’t there and then he had 10 goals.

KS: We were playing against our longtime rivals the Mambas. It’s a rivalry that dates back millenia. There’s not love lost between us. We see them on campus and we don’t acknowledge them.

RK: For you maybe.

KS: You know off the record, we don’t like… no I’m just kidding. Anyone else want to take us through?

Johannes D: Sure, I can take us through part of the game….

Joshua D: Well first of all, Captain Sandrolini you know, tells us to come 20 minutes early to the game. The game starts 6 p.m., 5 p.m.

KS: I had a bucket hat too.

HV: Which you drop.

Johannes D: So then, first minute of the game. Who takes the shot?

Johannes D: Elo! Elo takes the shot from halfway and it just sort of bounces over the ground. And then, funnily enough…

KS: And that went in.

HV: Wait, we scored on the first one?

RK: That wasn’t the final, that was the semi-final.

Johannes D: That was the final.

KS: No, let’s just talk about the final. Elo scored the first goal.

Johannes D: And then that was the only shot we had on goal for the first part.

RK: For the first half.

KS: A very defensively solid approach. As player manager I take pride in that.

Johannes D: And then also the attackers were just refusing to shoot.

AL: And the Gus Walsh scored our second….

HV: How do you guys remember this?

AL: After we conceded first.

KS: We conceded the equalizer to Kofi of The Mambas.

KS: Don’t put Gus in there.

KS: Well let’s throw Gus under the bus. Because then Gus redeemed himself, by scoring the 2-1. GZ: Beautiful shorts flapping in the wind.

AL: And then final goal in the last minute, by Joshua Doyle to seal the win.

DF: And the goal scorer.

RK: Well he already had that.

KS: Joshua Doyle, a real testament to our program. We groomed him since our first year. And you know he still hasn’t owned a pair of cleats in his life. He’s perfected that sneaker toe pass.

HV: Meg, the egos in this room are too big already. I don’t think they need to answer that question.

KS: I would have to disagree.

KS: I would think our strongest player is our team. Our collective.

KS: We are truly greater than the sum of our parts.

DF: The spirit of the team is the strongest player. Like we all run for each other. Like if one person makes a mistake the other person has his or her back.

KS: We’ve just worked to instill that culture for an early, early age. So you know our training session, 6 a.m. some of us didn’t know we’d make it….

RK: Shut up. Can we just get this done.

HV: Rohit you can leave. You have agency.

KS: Our season is over. This is our only way to relive our past glory.

TMW: So what is the winning regimine? How do you guys train?

KS: I think this is a question for Hannah Viederman.

KS: Should that be redacted for the final?

TMW: It’s on the record.

KS: There you go. Full disclosure.

KS: To our credit, we never forfeited a match for lack of players.

TMW: Is that a common problem?

GZ: You could say that.

KS: Which kind of speaks to our grassroots approach to recruiting across the campus.

TMW: Okay so last question, what is the future of The Vatican since so many of you are graduating?

GZ: That is a hard question. I’m going to hand that one off to Leah.

LM: Well I’m going to be abroad next fall so….

Johannes D: So I think one thing we can really take from that is that this team is so successful and so utterly dominant, that every single player has been approached for a loan, you know, going abroad or we’re simply just leaving and going to other clubs in other places where we got scouted.

AL: Can we go around and name the clubs we’re going to?

KS: A lot of D1 schools have approached us and for confidentiality reasons we can’t name them because it would compromise the agreement, but we are looking into an endowed scholarship, as they’ve been saying, in our name.

AL: There’ll be a renaissance.

HV: Sweat is the other one you were thinking of. Johannes D: But mostly there was joy.

KS: We really enjoyed sharing the season with everyone on the Mac campus. We’re glad everyone could make it to our games.