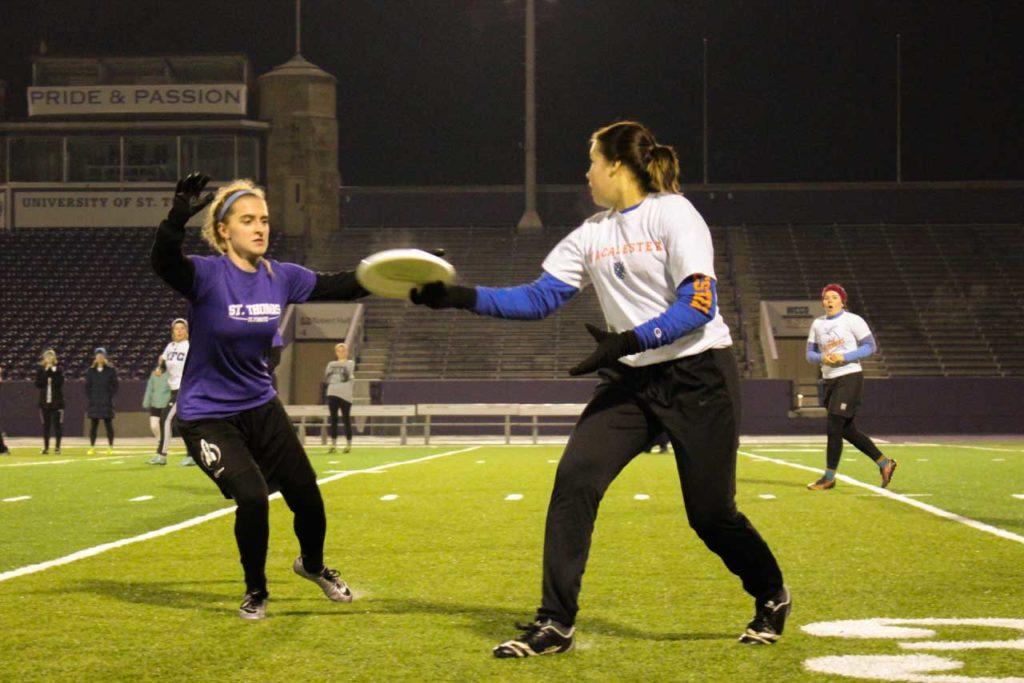 The Purse Snatchers lost their game 10-7. “We started off a little rocky,” Rebecca Klein ’18 said. “I think we might have been a little too confident going into it but once we realized what we were up against in the second half we played really well.” The women usually beat St. Thomas and did not expect such fierce competition for the fall 2017 season.

This loss is not indicative of their performance that night or of their season overall. After a tough first half they came back stronger and more cohesive in the second half. Their ability to come back as a team and improve as the game progresses has been a theme throughout the season.

Being a snatcher isn’t easy. “Not only are we fighting the patriarchy, we’re also fighting against some tough competition,” captain Wensday Berman ’18 said. From the sidelines the men’s St. Thomas team made, what Berman called “general white male patriarchal remarks” throughout the women’s game. The resilient Snatchers took on the challenge in stride.

The Purse Snatchers community is what shined the brightest on Saturday, full of love and support. “[It’s] one of the best communities I’ve experienced since coming to mac,” Maggie Jaenicke ’21 said.

The Blue Monkeys also fell to St. Thomas. Nonetheless, they still walked away with plenty to be proud of. The class of 2021 has stepped up to the plate this season to show potential while the senior class provides a sturdy base. “First line we had was a senior line…we couldn’t be stronger. Stronger than a nitrogen bond if you ask me,” captain Clay Whipp ’18 said.

The Blue Monkeys are a catch on the field and off. One enthusiastic fan yelled “Date me” to captain Malik Earl ’18.

With few people focused on the score, more attention was diverted to the excellent company, hit tunes courtesy of Wensday, and hot, hot chili served up by recent Mac alum Pradyut Bansal ’17. Emma Maxtutis ’20 called the whole event “a cold but thrilling night of the disk game”.