Bittersweet endings: A review of Chekhov’s The Cherry Orchard 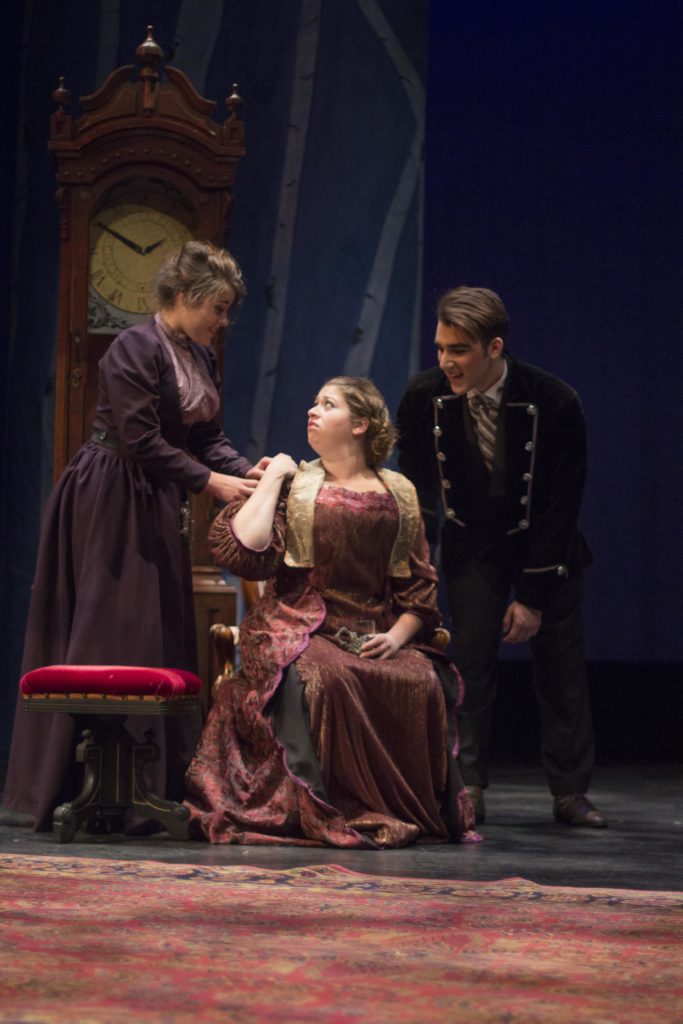 “All things must end,” asserts Boris Semyónov-Pischik, played by Michael Karadsheh ’18, in a rare moment of solemnity for Karadsheh, the perennially hilarious Urinetown veteran. Make no mistake; although Anton Chekhov’s The Cherry Orchard, directed by Beth Cleary, is adorned liberally with humor, the fact remains that it is, at its heart, about endings.

In the play itself, the plot revolves around the fading fortunes of an aristocratic family faced with the threat of losing their ancestral home, including the titular cherry orchard. More broadly, it is about the fading fortunes of many such aristocratic families in early 20th century Russia, and the proletarian revolution that was to come. The Cherry Orchard is also about Chekhov himself and the end of his life, as the play was his final work, written while he was dying of tuberculosis.

For Macalester, this play also signifies the end of an era. It is the last play that will ever grace the mainstage of the current theatre building, which will soon make way for a much-needed replacement.

The play opens with a monologue delivered in Russian by Chekhov (played by dramaturg, Russian Studies professor and alumnus, Brian Johnson). English subtitles are projected onto both wings of the stage, and this is repeated at the start of every act to provide context and commentary on the play.

The trope is excellent in theory and it works reasonably well in practice despite some minor difficulties. According to cast member Gillian Gold ’18, Johnson was an invaluable asset to the production, explaining the subtleties lost in translation, and even re-translating large sections of the play from Russian himself.

The lighting was particularly noteworthy in the moments of transition between acts. Set design was unobtrusive yet largely effective in evoking a sense of place, allowing the focus to remain on the sizeable cast, who were outfitted in outstanding costumes.

As for the actual performances, after shaking off some opening-night hiccups and getting into their stride, the cast rose to the occasion. Hannah Silverman’s ’18 subtlety and gravitas made for a masterful performance. Gold’s powerful stage presence and Zachary Anderson’s ’20 exploration of his complex character were memorable. At a little over two and a half hours, including intermission, the play was long, but not excessively so. All in all, it was an imperfect but fitting farewell to the old theatre building.

“It’s a lot of responsibility, and this production was a real labor of love,” Gold said. “This building has been home for myself and so many others over the years. And there are so many endings going on. As a senior, this is also the end of my journey at Macalester.”