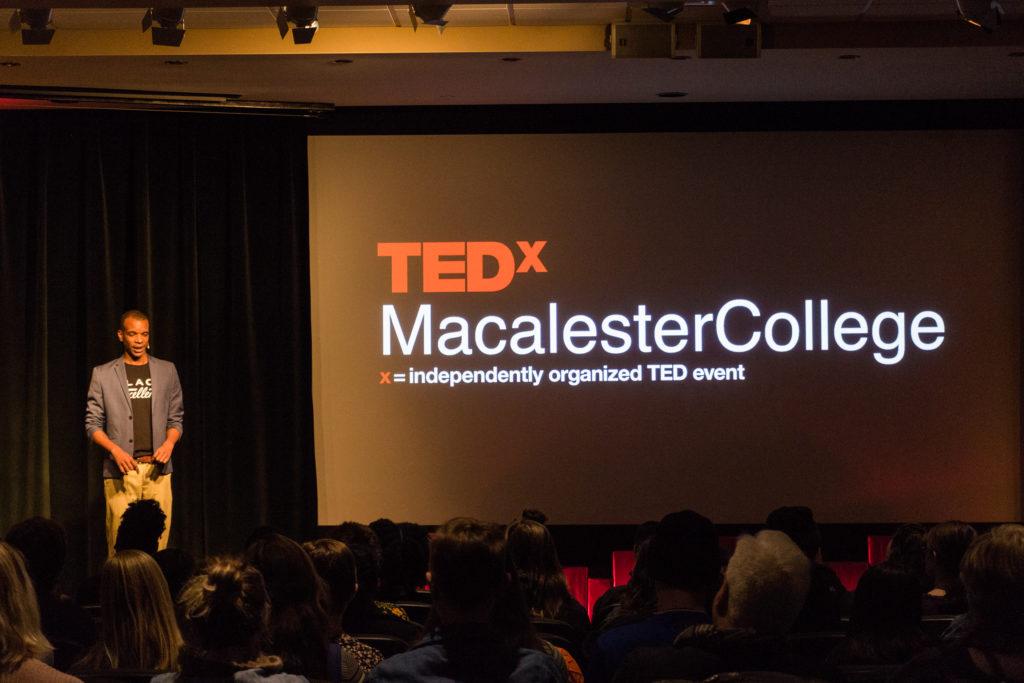 TED, short for “Technology, Entertainment, Design,” is a lecture series based in Vancouver, British Columbia that has spawned many independently organized events – including this one at Macalester. TED’s slogan is “ideas worth spreading,” and the entire event was executed with this mindset.

“We wanted to make sure it represented the values of Macalester at large,” Adamson said.

The beginning stages of organizing the event on campus began exactly a year ago in November, when Adamson applied for the TED license required to host an official TED event.

“You apply for a license from TED, and you get a representative of TED that works with your license,” Adamson said of the process.

The event replaced Macalester’s annual leadership conference, which had been steadily declining in popularity. According to Adamson, a TED event presents a fresh alternative to the usual format of a keynote speaker speaking on the narrow topic of leadership.

“We felt that we already had leaders all across campus, both students, staff and faculty,” she said. “Why not tap into that knowledge and really hear those stories be shared on our own campus?”

The 14 speakers, who were chosen from 28 applicants, all had an important message to share with the community. Adamson said the Speaker Selection Committee was focused “on getting a diverse group of topics, people and outcomes from these speeches in order to have a really large breadth and depth of information shared.”

One such speaker was Jason Jackson, the Director of the Lealtad-Suzuki Center in the Department of Multicultural Life. Jackson gave a speech entitled “Bloom Where You Are Planted”, explaining how he overcame heartbreak, depression, and feelings of isolation during his move to Minnesota.

Becky Githinji ’18, Aarohi Narain ’18, Dylan Jekels ’18, and Myhana Kerr ’18 all shared their stories of studying abroad in Asia as women of color with intersectional identities, leaving the audience with the question of how culture and language can expand to include the experience of minorities.

Cuauhtémoc Cruz Herrera ’19, an applied math major, detailed how he received a grant in order to start the non-profit Integración Matemática – which provides math support for public school students in Mexico.

The event closed with a talk from Melisa Peresian Letayian ’20, who elicited an extremely positive response from the audience. She shared life lessons she learned by engaging in a conversation with her younger self.

“I think we got really good engagement from the crowd. Everyone who went loved it and I think it was really helpful to the campus.” Adamson said.

Adamson was unsure if the event will happen again in the future.

“We need to meet as a committee and decide if it’s something we want do every other year, or maybe it’s every year, every three years. It’s a lot of work,” Adamson said The event’s organizers would need to reapply for the license each time.

If Macalester College does organize a TEDx event in the future, there will be room for even more student engagement.

“I would love to see it grow to where we could have more events leading up to it, after it, and maybe have some more interactive pieces throughout the day,” Adamson said.

“I think hosting a TEDx was really the best way that we could have brief 10 minute talks about what people are doing on our campus,” Adamson said. “In a way that highlighted both the outstanding work that our community members are doing, and gave the audience a chance to hear things they normally wouldn’t in a conversation.”