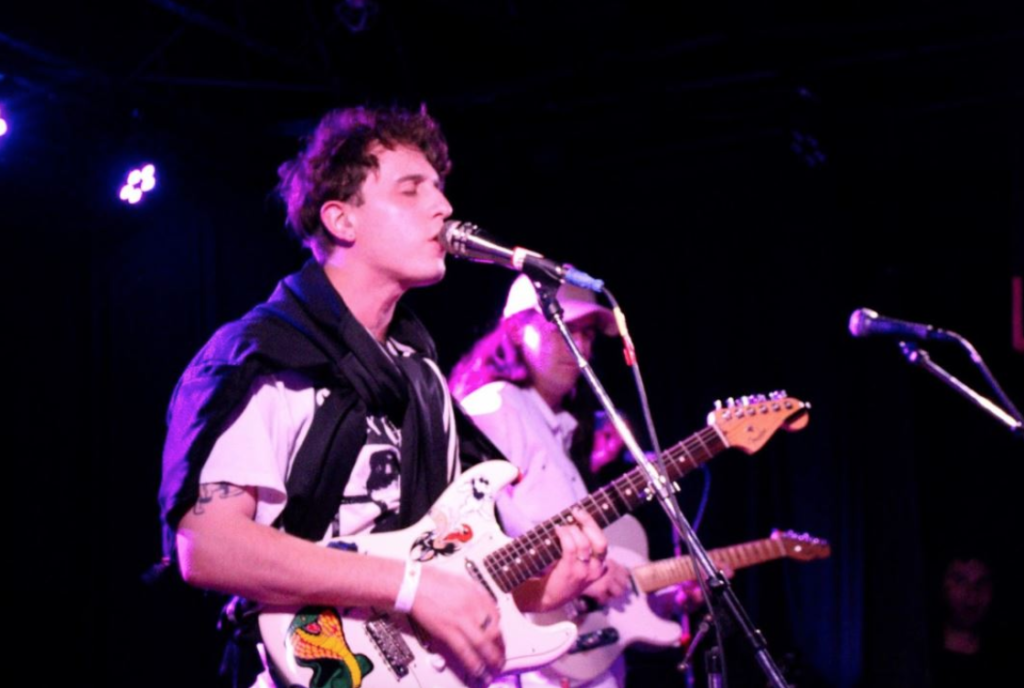 Beach Fossils performs at 7th St Entry. Photo by Alexander Marketos ’20.Oh, October in Minneapolis. The air gets cooler than it’s been in months, and people break out their sweaters and light jackets in anticipation of the coming season. However, the surprisingly warm weather last Thursday could not have been more teasing. I realized that pairing the warm weather with a Beach Fossils concert would be the best way to say goodbye to the last few months of warm air.

In terms of jangle pop, Beach Fossils are a pretty shape-shifting band. They burst onto the scene in 2009 riding the wave of surf-inspired relaxed indie rock. Their 2010 self-titled debut album featured shimmering guitar lines that wouldn’t have sounded out of place in a Tommy Bahama’s.

Since then, the band has released three albums, their most recent being Somersault. The album stays true to the band’s stylistic origins, but adds flutes, trumpets and string arrangements.

When Beach Fossils took the stage at 10:30 p.m., lead singer Dustin Payseur explained to the crowd that he injured his ankle at a previous show in Chicago. The sold-out crowd seemed to hold their breaths, hoping the performance wouldn’t be condensed or changed. But Payseur said he was still going to give it his all and he, along with the rest of the band, did just that for an hour and fifteen minutes.

Beach Fossils has been performing for a long time, and it showed. The band sounded tight together and played their songs effortlessly. But they never seemed bored on stage.

At the beginning of their set, they played several short songs one right after the other. Were they worried about curfew? Luckily, they slowed down later in the set. In between almost every song, Payseur and lead guitarist Tommy Davidson exchanged jokes and interacted with crowd members, at one point hosting an impromptu Q&A session with fans.

The first song of their encore found Payseur repeating a line from Radiohead’s “Everything In its Right Place”: “Yesterday I woke up sucking a lemon.” He joked that Radiohead’s lead singer Thom Yorke would join them for the encore.

Lighthearted moments like these made the show feel more intimate. The new songs they played sounded fresh, but older cuts like “What a Pleasure” and “Daydream” sounded exactly the way you’d expect to hear a band play them after playing them for over six years — just a little too perfect.

Currently, Beach Fossils has three members, but on stage, the group became a five-piece band. The addition of keyboardist Daniel Fox (who was the lead singer of the first opening band, Raener) added a depth to their live sound. The five members were able to recreate on stage the sound on their record. Fox even brought out a trumpet.

This really allowed the diverse sonic palette of their new album to be on full display. In some of their older songs, the keyboardist switched to hand percussion parts not heard on the record. This livened the songs up and added a new element to their performance.

Decisions like these placed Beach Fossils’ surfy sound center stage. During slower numbers like “Somersault” and “Down the Line,” the crowd was hooked on every word, swaying along to the languid beat. Beach Fossils has a near-perfectly ability to recreate their studio sound on stage.

At times, their live sound lined up so well with the sounds on the record that it could have passed for karaoke. The reverb-heavy guitar tone was on full effect Thursday night, transforming the dark 7th Street Entry into a sunny beachside pier.

The band left the stage at the end of their encore, and the crowd headed back into the cooling weather with looks of excitement on their faces. The coming months promise cold air and snow, but after the Beach Fossils’ performance, winter will just have to wait.