Where Does Art Come From: Panel Discussion at Mia 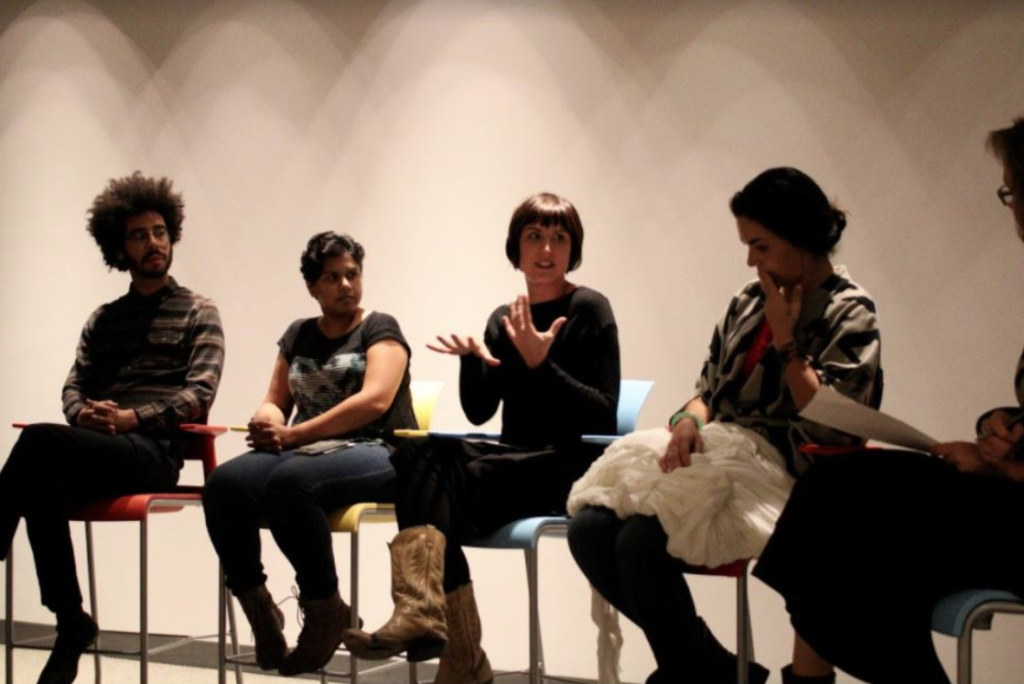 This past week, a panel gathered at the Minneapolis Institute of Art (Mia) to discuss the concept of creativity and artistic inspiration. Hosted by ARENA DANCES, the panel “Where Does Art Come From?” included six artists: two architects, three visual artists and one musician. Mia director Kaywin Feldman moderated the panel. The panelists discussed their inspirations, how their work has changed with the current political climate and the measurement of creativity in schools today. A small audience gathered to listen as well as participate in the discussion.

Feldman asked the panel: “What inspires you? Do you have a muse?” There was instantly a sense of comfort among the panelists, who were familiar with the question. Joe Horton, a rap artist in an alternative hip-hop group called No Bird Sing, said that he is inspired to “confront the mystery” in the world through his songs. Horton said that his art is a “reaction of intense emotion” to that mystery.

Nina Ebbighausen, a practicing architect and professor at the University of Minnesota, discussed how buildings can teach us about key elements of ourselves. Ebbighausen articulated the importance of “not knowing the meaning of an idea, but seeking the feeling of being alive.” Ebbighausen asked herself, her fellow panelists and the audience to reflect on how they engage with their surroundings and how those newfound understandings are embodied in architecture.

Meena Mangalvedhekar, a mixed-media artist, explained how storytelling can serve as a framework for understanding history. Gary Reetz, a practicing architect at Hammel Green & Abrahamson Inc., added that artists can be influenced by history, but that they should always add something new of their own.

Reetz described a current project that he is working on at The College of William and Mary. For this particular project, Reetz mentioned that he wants to maintain the historic element of the building through the use of the materials such as brick and limestone. He also has used a large amount of glass in his design so that the arts practice within the building could remain visible to the public. This project will be slightly different from Reetz’s other projects such as The Janet Wallace Fine Arts Building here at Macalester.

Commenting on how our current political moment has influenced her work, local visual artist Margarita Arguedas said that art should be an advocate for “social sustainability.” She is a conceptual artist who works with painting, sculpture and installation.

Arguedas oftens asks herself: “What do I do as an artist?” This question allows her to reflect on why she does her work, and to translate what she is feeling about the current political climate into her art. While she primarily works with fabrics, Arguedas is a mixed-media artist. The wide range of materials she works with allows her to communicate a multiplicity of emotions.

Rachel Jendrzejewski, a writer and interdisciplinary artist, admitted that she feels the same way about her work and her commitment to her artistic practice, only now there is a clearer focus in mind in order to sharpen the direction of her work.

Jendrzejewski described her process of self-reflection and the need to collaborate with one another as “working horizontally.” She elaborated on the process of working with one’s neighbor and attempting to create resistance through art. Working with experimental theater allows her to express her frustrations and engage in a collaborative process. She discussed the news cycle with a sense of vastness, reiterating her attempt to assure herself in her daily artistic practice.

Horton also uses collaboration as a form of resilience. He shared a story about his experience in a blizzard, in which he felt the “leverage of comradery” among him and his neighbors. In parallel with his feelings about today’s political climate, Horton expressed that today is somewhat like a snowstorm, where there is “no more freedom than in a dying empire.” He encourages others to recognize the various ways that people are advocating for one another, and to “revel in the gold” of community and collaboration.

The panel discussion challenged how creativity is defined as well as where art comes from in a variety of perspectives. In her questions, Feldman acknowledged how many in the artistic community are struggling to cope with today’s political climate in the United States and to grapple with this in their art. She also touched upon the diverse range of factors that contribute to personal artist practices, as well as the themes that apply to the broader art community as a whole. By placing a range of artists, architects and a musician together in dialogue, the panelists were able to gain perspective on their own process and learn from one another. Additionally, the audience was led to contemplate the value as well as nature of art and creativity.