Review: Romeo and Juliet at the Guthrie Theater 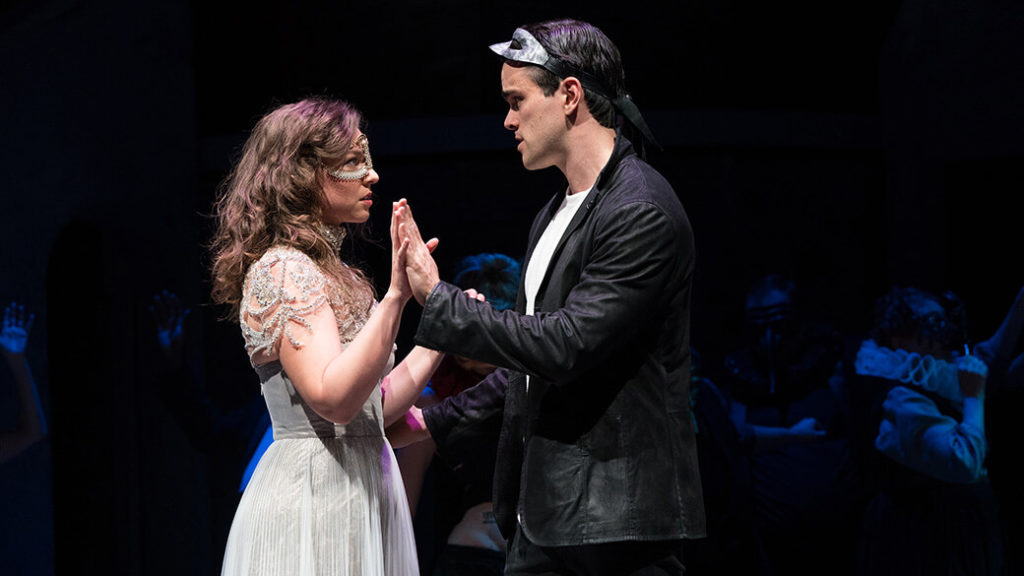 Downtown Minneapolis’s Guthrie Theater is considered one of the most prestigious theaters in the Twin Cities, and its current production of William Shakespeare’s Romeo and Juliet does not disappoint. The director, Joseph Haj, known for his production of King Lear this past spring, presents the world-famous love story through a mixture of traditional and modern elements. With a stellar design team including Anna Louizos, the set designer nominated for a Tony for her work on Lin-Manuel Miranda’s In the Heights, the production earned a standing ovation from many audience members.

Romeo and Juliet, perhaps the most famous of Shakespeare’s tragedies, has been produced and adapted countless times since its publication in the late 16th century. The story follows two rival houses—the Montagues and the Capulets—who have been at odds for so long, nobody is quite sure why they hate each other so deeply. The titular teenage characters, a lovesick Romeo Montague (Ryan-James Hatanaka) and soon-to-be-betrothed Juliet Capulet (Kate Eastman), fall in love the moment their eyes meet. They are determined to live happily ever after. But, as the label “Shakespearean tragedy” entails, their plans are thwarted by violence and bloodshed.

Time is an overlying theme of the story: the entire plot takes place over only three days, cutting short the couple’s “forever.” Visually, the design team highlights this key element incredibly well. The set, an engaging turntable that allows for a castle, Juliet’s bedroom and the iconic balcony to be featured with very little transition time, revolves around a clock tower. After every scene or two, the lights dim as the giant set shifts, while the hands of the constantly-glowing clock spin. If one fails to notice the hour on the bright clock face, the beautifully lit backdrop allows additional insight, projecting the gorgeous colors of sunrises and sunsets, contrasted against the muddled greens, reds and browns that signify deaths occurring onstage below it.

That is not to say every technical aspect hits the right note. This production of Romeo and Juliet is advertised as a marriage between traditional and modern periods. One of Haj’s added modern elements the story is a hip-hop-style beat that plays as characters enter or scenes transition. It is most obviously used, though, during Capulet’s party, where classical music plays in the background until Mercutio (Kelsey Didion), part of the rebel party of Montagues, motions to the assumed DJ to switch it up to something faster. While this is indeed a present-day touch, it lacks flow and leaves the audience confused. It feels almost as if Haj tried to connect the text to a younger crowd through what, between the success of Hamilton and Grammy-winning artists such as Kendrick Lamar, seems to be getting attention their attention today. Nevertheless, this anachronism didn’t break the actors’ momentum. The entire company delivered Shakespeare’s classic iambic pentameter with the power and fluidity it’s held since the 1500s. This group, though, also came with modern flair. The cast, including Macalester alum Shá Cage as Lady Capulet, is slightly smaller than usual and places a greater focus on the women of the story. For example, the Montague parents are combined into the single role of Lady Montague — who, in the original script, has only a few lines before she quietly dies offstage. Charity Jones plays this role so eloquently that I left wishing she’d gotten even more stage time.

But the biggest change is the casting of Mercutio, Romeo’s dear friend, as a woman; and what was perhaps an even bigger choice was the lack of mention this variation received in both director’s notes and the story itself. The only change to the text was altering the character’s pronouns from “he” to “she.” Without any other explicit mention of her femininity, Mercutio remains as strong of a comedic Shakespearean role as any man could pull off. Her friendship with the surrounding men, and even her demeaning speech to the nurse, are unaffected. This is truly a modern choice in that gender-bending does not have to be a huge deal, even with such an aged piece. Didion’s gripping performance and comedic timing did the classic character justice; aside from Romeo and Juliet’s final scene, her death hit me the hardest, leaving a palpable tension in the theater as the lights came up for intermission.

Romeo and Juliet is playing on the Guthrie’s Wurtele Thrust Stage through Oct. 28. For fans of Shakespeare’s work and first-timers alike, the show is definitely one to see. While it has its flaws, the cast and crew do the timeless script justice from the highest comedic points to the lowest bloody, dramatic woes.