Theater preview: Giving voice to the children in No Child 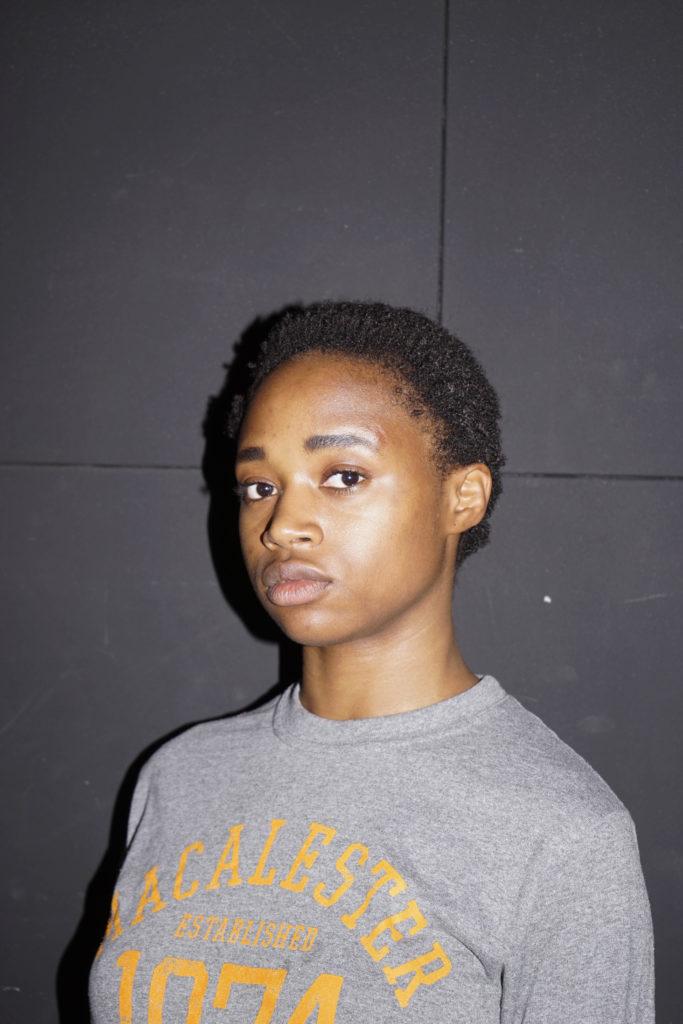 Julia Fritz-Endres
When you hear the words “No Child,” what are you reminded of? For most who lived through the era of intensive standardized testing in American public schools, the phrase “No Child Left Behind” comes to mind. Nilaji Sun, a teacher in the Lower East Side of New York City, saw the effects of the No Child Left Behind policy first-hand. Using her experiences as inspiration, Sun wrote the play entitled No Child. The play takes place in a New York public high school similar to the one where Sun taught.

This weekend, Niara Williams ’18 will perform No Child in Macalester’s Blackbox Studio Theatre. Faye M. Price, co-artistic director at Pillsbury House Theatre and Macalester alumna, is the show’s guest director. You can catch the show at 6:30 p.m. on Friday, Oct. 13, and at 6:30 or 9:30 p.m. on Saturday, Oct. 14.

Williams is performing the play for her senior capstone project, which she chose with the help of Professor Harry Waters, Jr. (Associate Professor in Macalester’s Theatre and Dance department). “[Waters] wanted a challenging, more individual project for me,” Williams said. Thus, they chose a one-woman show that requires Williams to play 16 different roles. These characters range from students to faculty members, including the school’s janitor, who narrates the play. Williams also performs as Ms. Sun, the arts teacher based on the playwright herself.

“You can tell that all of these characters are coming from [Sun’s] own lived experiences,” Williams said. “There are elements of care and generosity and empathy that she puts into crafting each of the people she puts on stage.” To portray these characters, Williams must approach their stories with the same amount of passion and attention to detail.

According to Ming Lian ’19, No Child’s costume designer, Williams shifts seamlessly from one character to the next. “She has this natural presence,” Lian said. “She does so much with her vocals: she sings, she does accents, she speaks Spanish.” With this versatility, Williams makes each character a unique, fully formed personality.

“You need to have a lot of affection for each person that you’re portraying,” Williams said. “They go through some harsh realities … or positionalities that you haven’t been through.” Many of the play’s characters are students of color from a low-income neighborhood. “Due to ingrained societal anti-blackness and racism,” Williams said, “we don’t always give black and brown children the space to grow and make mistakes that we would give white children.” They “have never been able to tell their own stories or been given the chance to succeed.”

The play takes place in the wake of No Child Left Behind, which promised to help disadvantaged students. Critics of the policy say that it failed in this regard because it did nothing to address systemic inequalities in public school systems. “Instead of looking at education as a journey and a process with individual students developing in their own time,” Williams said, the policy “had to do with everyone reaching a certain benchmark.”

While No Child provides some commentary on this policy, it would be a mistake to label it as a political play. Richard Graham ’19, the light designer, said: “It is not about race and class and policy, but about the human beings affected.”

Similarly, Ms. Sun’s teaching style is not dictated by distant, bureaucratic forces, but by the needs of the students in her classroom. She encourages her students to produce art, and to put on a play entitled Our Country’s Good. She does this out of a deep sense of responsibility for her students’ academic progress and fulfillment. However, the play is a story about prison, and it requires her students to play a group of convicts. She realizes that, in asking the students to take on those roles, “she too has been struck with the socialization to associate these kids … with criminality,” said Williams.

In performing No Child, Williams encourages Macalester students and faculty to discuss these issues. Graham hopes that No Child will encourage members of the Macalester community to “engage in a more humanizing conversation.”

On a more basic level, the play shows the voices of students of color who are too often silenced, rendered invisible. It allows audience members to hear those voices clearly, as independent from the societal problems many associate them with.

The title of the play itself, Williams says, opens up the possibility for a future different from the long history of broken political policies. Audience members should imagine an alternative ending to the phrase “No Child” – one that does not represent a failed effort to improve public schools, but instead creates a future in which all students get the chance to succeed.