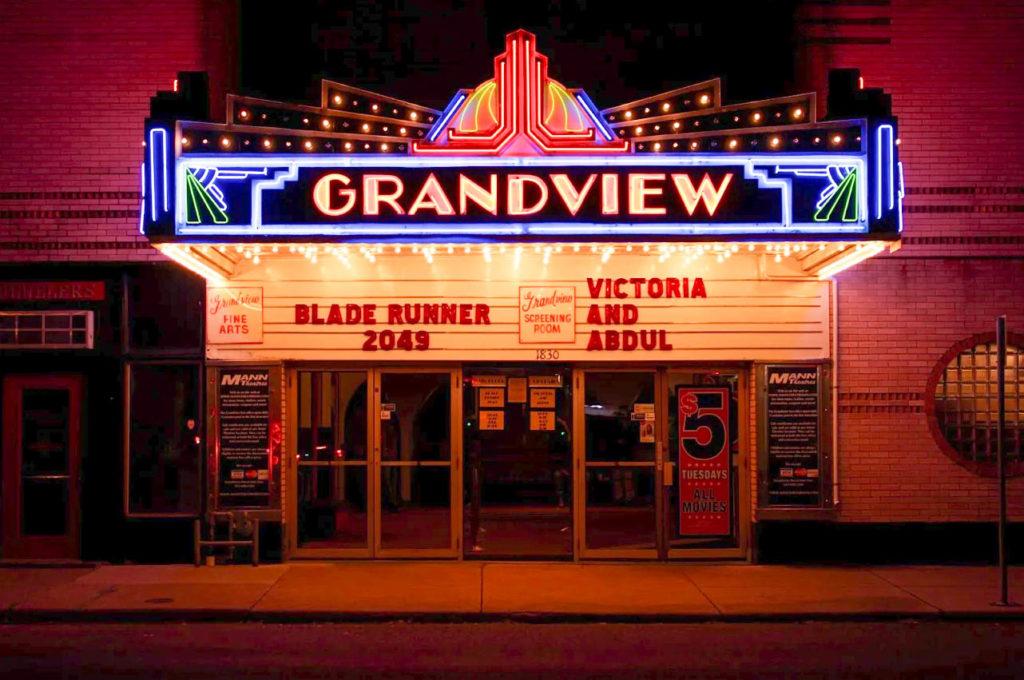 The front entrance of the Grandview theater on 1830 Grand Ave. displaying the movies playing. Photo by Kori Suzuki '21.

The year is 2049. Earth is a prison, home only to those unable to escape to the offworld colonies. Almost all natural life is extinct. The past is bleak, the present even bleaker. Yet the future could hold something that also seems close to extinction in this dark world: hope.

This is the universe of Denis Villeneuve’s Blade Runner 2049, starring Ryan Gosling and Harrison Ford. The long-anticipated sequel to Ridley Scott’s 1982 cult classic film Blade Runner, Villeneuve’s work attempts to continue a cinematic story which, among others — 2001: A Space Odyssey, Alien, Star Wars —is widely considered to have laid the foundations of science fiction in film. Simply put, 2049 has a hell of a lot to live up to.

To say that it succeeds would be an understatement.

Thirty years after the events of the original Blade Runner, the manufacture of replicants — bioengineered androids almost indistinguishable from humans—is no longer illegal. The Wallace Corporation now controls the replicant industry, and is bioengineering a new generation of models without the unstable tendencies of the older designs. In order to ensure humanity’s survival, these replicants have effectively been integrated into society. Unlike their predecessors, they are allowed to have lives.

A next-generation replicant, Officer “K” (Gosling) is employed by the Los Angeles Police Department as a “blade runner,” a special agent tasked with the assassination of rogue, older model replicants. On and off duty, K is subject to the unchecked prejudice against “skin jobs,” as replicants are derogatorily referred to, that pervades modern society. He spends his free time at home with his holographic girlfriend Joi, a personal artificial intelligence commercially distributed by Wallace Corporation.

What little stability and certainty can be found in this world is upended — slowly, at first, and then all at once — when K makes a discovery with the potential to change the social order of the entire world.

Similarly (though on a somewhat smaller scale), Blade Runner 2049 has the potential to exert a strong influence on contemporary cinema. In recent years, there has been an explosion in exploitation of 1970s and ’80s pop culture, now marketed in the form of franchises and cinematic universes on which merchandising empires are built. This trend has led to a dramatic increase in the production of movies designed to advertise a universe, exploring ideas and raising questions promised to be satisfied in the sequels. In turn, use of this system has led to an increase in movies that are of a lesser quality. This is not to say this model cannot be used effectively. It, for example, Andres Muschietti’s recent adaptation of the Stephen King novel, told an intelligent, thought-provoking, and skillfully executed story within a self-contained narrative, while still leaving open the possibility of a next installment.

But, although it may not avoid this paradigm entirely, Blade Runner 2049 demonstrates how to execute a sequel that is faithful to the source material while also being a self-contained narrative able to stand on its own. This is not to say an understanding of the events and context of Blade Runner does not enhance the experience of the film; it undeniably does so. However, it is not necessary to enjoy the sequel. Blade Runner 2049 paints a familiar yet distinct backdrop for its characters, giving the audience everything they need to understand the film and the characters. There are many references to previous events and characters. Yet even in the case of Rick Deckard (Ford), the original blade runner, the film explains everything the audience needs to know to understand and enjoy the story.

Blade Runner 2049 is a technically beautiful film. Roger Deakins, Villeneuve’s cinematographer, expertly constructs stunning visuals through a near-flawless melding of practical effects and computer-generated images (CGI). The writing is excellent, and Villeneuve’s direction is breathtaking, striking a delicate balance between homage to the groundbreaking techniques of the original Blade Runner and the subtly distinct presence of his own personal style. Gosling delivers a laudable performance as K, as does the rest of the cast including Ana de Armas and Jared Leto, although Harrison Ford clearly holds the standout role. Ford’s performance is possibly one of the best of his career.

Hans Zimmer and Ben Wallfisch’s composition speaks to the iconic and ambient qualities of the original film’s score, at once evoking a sense of awe, scale and momentum.

Yet the film’s greatest strengths are its dedication to the essential questions at the core of science fiction and the skill with which it instills those questions within us so that they persist even after the screen has faded to black. Blade Runner 2049 was released Oct. 5. It is 2hr 43min in length and is rated R. The film is currently playing at the Grandview Theater.