Meet the Daswani Duo: Saakshi and Suveer talk the twin life at Mac 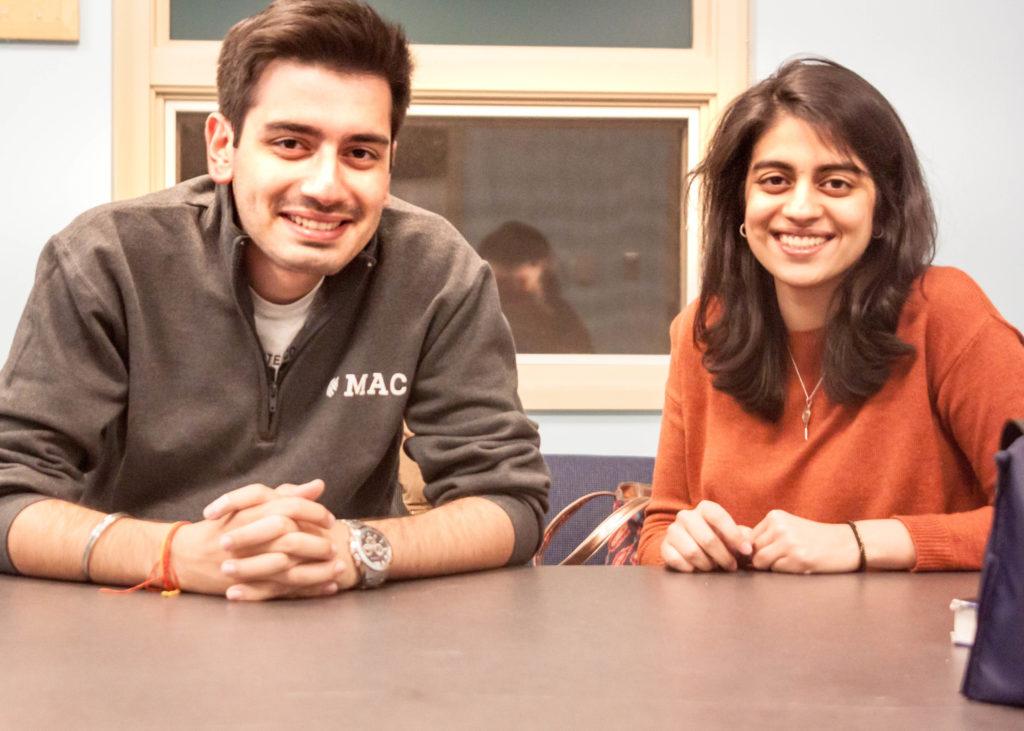 This week The Mac Weekly sat down with seniors Saakshi Daswani ’18 and Suveer Daswani ’18 to talk about their experience as housemates, best friends, and twins at Mac. On campus, Suveer serves as MCSG President and Saakshi is the Academic Affairs Committee Chair. While they do a lot together, they follow very different tracks academically. Saakshi majors in neuroscience while Suveer spends his time studying economics and political science.

The Mac Weekly: How did you end up at Mac together?

Saakshi: Do you wanna go?

Suveer: So she’s laughing because whenever we’re asked this question, I’m always the one answering it. And then my mom and sister are like, “Oh, you have this prepared spiel.” But anyway… I’ll tailor it for you. We were both looking at small liberal arts schools and that’s one of the reasons why Macalester ended up on our list. It has good financial aid and we didn’t want to be a burden to our family. Both of us applied early to different schools, but then I found out that one of our high school friends – well, I wouldn’t say friends, we just knew of her – went here. So I met up with her, and once I spoke to her I was pretty confident that I wanted to apply to Macalester. And at the time the logo was the orange, the peeling orange, and I saw that and I was like, I want to go to Macalester because of the orange. The whole idea of making a difference and changing the world and the world being open to you, all that cliché stuff really attracted me.

Saakshi: I wasn’t as convinced… and he applied. And the day before the deadline my parents were like, “Why don’t you consider sending in an application and see what happens?”

Suveer: Hers was more spontaneous and mine was more well-thought out and excited … Saakshi always had higher academic grades and I was always low on the academic side, so it was always like, if one of us gets in it’s going to be Saakshi, it’s not going to be me.

TMW: So if the orange brought you to Mac, how do you feel about the rebranding?

Suveer: Oh, you’re asking me the big ones. I miss the orange. And I can see how a lot of students, not just me, might have gotten attracted to the uniqueness that Macalester was displaying through the orange. The orange being one example of many. With the rebranding it’s good because it’s ensuring consistency across departments… but it’s the easy way out, rather than capturing Mac’s uniqueness.

TMW: What were you thinking when you knew you were coming to Mac together?

Saakshi: With our academic interests we were naturally split up in various paths, so we found our own groups of people. That being said, we were used to having the same friends and Macalester is so small so we kind of expected that.

TMW: So you live together?

Suveer: We’ve lived together junior year and senior year with two other people. I think it’s been great; I mean, we hardly spend time at home. But for a meal or a quick check-in or some advice, we get together. It’s been great being able to come home to a space where you have home away from home […] I mean, I call Saakshi my walking ATM. Especially when I need financial support, I know I can come back home and ask Saakshi. She has no choice. Despite the fact that I’m an economics major my money saving skills are not as good as hers.

Saakshi: In college [we’ve] become more like best friends. It’s become really chill. Like he knows how stressed I get even though I don’t show it. And when I’m stressed, he’s the one who faces it.

Suveer: And I’m horrible with waking up in the morning, so we have a teamwork type of thing. So I’d say walking ATM, alarm and support system.

Saakshi: Our personalities are really contrasting in some ways, so we balance.

Suveer: Saakshi’s been someone I can fall back on. And even for her, she is sending in an application to med school right now, and if she needs an essay read or edited in five minutes she can’t ask a professor.

Saakshi: Or even a friend, for that matter.

Suveer: But if she needs urgent editing done right now, on the spot, she can ask me. It’s a different thing of whether I do that or not, but at least she can ask me. So I think I rely on her for that source of strength and support.

TMW: Do you ever get on each other’s nerves?

Saakshi: We fight a lot, but it’s in a very natural, healthy way.

Suveer: Saakshi gets on my nerves all the time. I just haven’t told her. I’m publicly disclosing that right now. It’s all coming out because I’m always honest with the media … No, I’m just kidding.

TMW: What are some memories from growing up together?

Suveer: I think I know what you’re talking about.

Saakshi: Should I say it? Okay. So we were like five and at a birthday party, and again this comes down to personality. So Suveer was this kid who would just roam around and talk to a million people, and I would keep it in check and look around and see if everything was okay first … so he basically was doing his own thing and suddenly it was like an hour later and I didn’t see him and our parents had gone somewhere, so I roamed around trying to figure out where he was. I couldn’t find him so I just sit down, this five year old kid, and start howling in the middle of the party. And then suddenly he comes out smiling, not knowing what was going on, and I was there crying.

Suveer: And I loved it because of the attention.

Saakshi: And it’s funny because to this day if I see those parents, they always bring it up.

Suveer: I have my three words. I’d say strong, supportive, and special.

Suveer: Do you have three words? … I can tell you one more anecdote. I had to do a speech for the new student welcome for the class of 2021 … and the only person I could run through it with was Saakshi because she gets me. She was telling me if I was bringing out myself or just rambling, because I do that often.

Saakshi: Yeah, I think with the speech and the essays again it’s something so personal. Like an editor can correct the grammar but they can’t tell you if it’s like you, you know? And back to the words, if it’s one word I’d say complementary because we’re such different people and we can always find balance.

TMW: How is it having your brother as the school president?

Saakshi: I would say it’s extended hours of secretary work, I don’t know. It’s like [I’m his] personal assistant on call.

TMW: What are some fun facts you want to share about each other?

Suveer: Why is this so hard?

TMW: Do you mind if people touch your earlobes?

Suveer: I’m more than happy. I have office hours in the MCSG office, people can come along.

Saakshi: Suveer is super scared of puppies or any moving creature. He’ll freak out. Like, he can literally start crying. That being said, if there’s a person or a professor he’ll pretend he loves dogs like he’s the most comfortable person.

Suveer: Another fun fact about the both of us is that we’ve done a lot of things together, like when we were young we’d even shower together, but we’ve never been in a class together in high school or here. So that’s our goal for next semester. I think through our complementarity, or whatever you say, we probably both can do well in the class.

TMW: Do you know what you’ll take?

Saakshi: Machine Learning. I think that’s the only class I can maybe convince him into taking.

Suveer: For me, it’s whatever professor I can convince to give me the higher grade and not Saakshi, because at least then I’ll have one time I could beat Saakshi in academics. [Laughs] I’m just kidding. I have one more fun fact. So my email is s-d-a-s-w-a-n-1 but my last name has an “i” at the end.

Saakshi: I stole that.

Suveer: But Saakshi’s email has s-d-a-s-w-a-n-i and I was bitter about that right from the first day at Macalester and I think that shows that she was given priority—maybe it was the academics that I told you about—and then they just took me on board. I was the plus one, quite literally.

TMW: Who was born first?

Suveer: By a minute.

Saakshi: Just a minute, but it made a big difference.