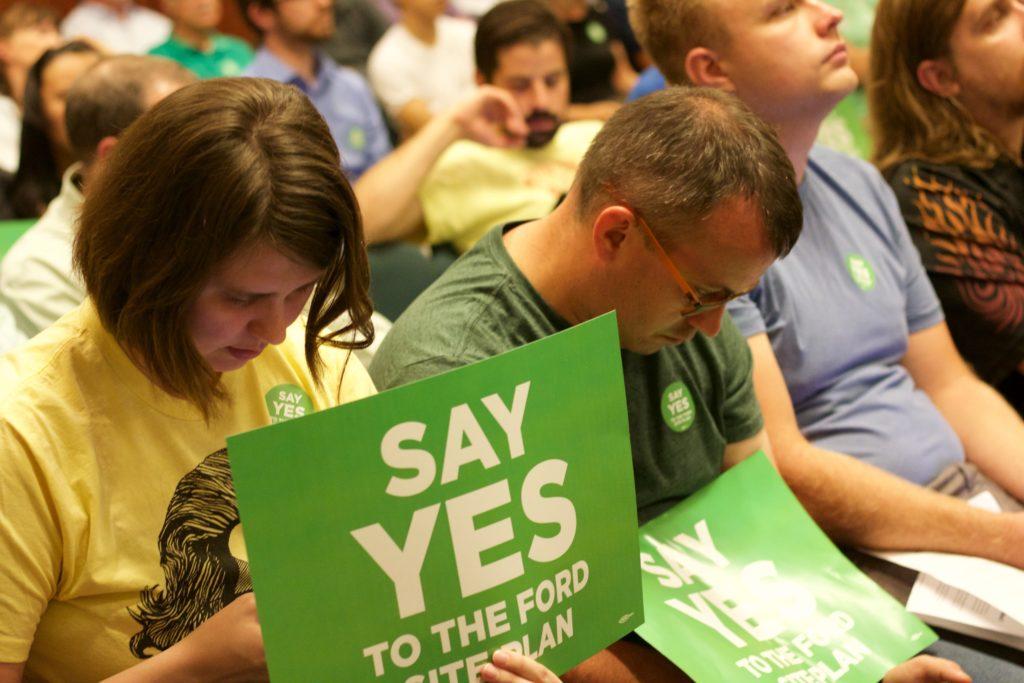 When the Ford Motor Company’s assembly plant closed in 2011, it left behind a large plot of barren land in the Highland Park neighborhood of St. Paul. For the last six years, it has stood vacant while city planners, Ford officials and local representatives have debated its fate.

On Wednesday, Sept. 20, concerned citizens packed a basement room of the St. Paul City Council Chambers to share their views on the plan to rezone the land detailed in the Ford Site Zoning and Public Realm Master Plan – commonly called the Ford Plan.

All the seats in the meeting room were filled, and those without seats lined the walls or watched the simulcast of the meeting from overflow rooms.

Citizens both for and against the rezoning plan had an opportunity to speak to Council members, who will vote next Wednesday on whether or not to proceed with the plan.

He also addressed one of the most pressing concerns of those opposing the plan: the effect of the proposed high-density housing on traffic in the surrounding area.

“Our transportation study showed that while traffic would increase, the increase did not exceed the capacity of the existing roadways surrounding the site,” Sage-Martinson said.

Sage-Martinson stressed both that the Ford plan has involved years of deliberation and that it will not be carried out with any great speed. Instead, the property will likely be formally listed for sale to a developer in six months, infrastructure will not be in place until 2020 and the developer’s building plans will not be unveiled until 2021.

“If you vote next week, you will not see buildings go up on Oct. 1,” Sage-Martinson said to the City Council members. “It’s important to note that there is a process here before we begin to see buildings built, but this is an important step in the process.”

Council President and Ward 4 Representative Russ Stark opened the floor to those opposed to the plan. Each person who approached the microphone had one minute to address the Council members.

Most of the concerns about the plan involved the potential for added traffic in Highland Park and the surrounding area. Young members of the Highland Park Little League team, many dressed in their baseball and softball uniforms, approached the podium to advocate for the fields where they play against potential encroachment.

Jim Winterer, who worked at the Ford plant in the 1970s putting rear axles on trucks, opposed the level of density in the proposed development.

“I believe we’re throwing our neighborhood under the bus,” Winterer said. “The compromise you’re offering won’t change the extreme density that’s proposed for this sight. We can do better – we can develop this property without destroying the neighborhood that we love.”

Kenny Bergland accused the plan of attempting to “drop the island of Manhattan in my neighborhood,” a move he described as “completely out of character with my experience of St. Paul.”

When it came time for supporters of the plan to make their case, many defended the high-density development – citing a study by NAI Everest, a commercial real estate firm that estimated housing vacancy rates in the Twin Cities at under 3 percent. Developments like the proposed Ford Plan, they argued, would alleviate the extreme scarcity of rental properties, and thus drive down rent prices.

Brandon Long, a member of the community advocacy group Sustain Ward 3, spoke to the need for affordable housing in the Twin Cities.

“Although density does not guarantee affordable housing, we cannot provide the number of housing units required to ease our housing crisis without it,” Long said. “Rezoning is a start to accommodating all of our wonderful future neighbors.”

The City Council will hold a follow-up community hearing next Wednesday for those unable to attend the Sept. 20 meeting due to observances of the Jewish holiday of Rosh Hashanah. Following that meeting, the Council will vote.