Waxahatchee opens for The New Pornographers at First Avenue 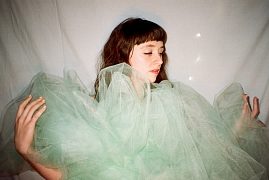 Adrianna Jereb
What’s kitty-corner from the Target Center, covered in silver stars and arguably the coolest scene in downtown Minneapolis?

FIRST AVENUE. The signage is unmistakable: bold capital letters against a background design like the staff lines of sheet music.

On Tuesday, April 18, the dark Mainroom venue is well-packed by 8:00 p.m., when the opener, Waxahatchee, takes the stage. Band founder Katie Crutchfield is on vocals and guitar and accompanied by a bass player. Crutchfield, with dark hair and short bangs, looks a bit like Zooey Deschanel from a distance—but with tattooed arms.

The indie act, originally from Alabama, takes it slow. Early in the set Crutchfield performs “Catfish,” off Waxahatchee’s 2012 debut album American Weekend. She crones: “Counting shooting stars and catfish / but I’ll never make a wish.” With such minimal accompaniment, Crutchfield’s voice has to do most of the work. “Swan Dive,” off the 2013 album Cerulean Salt, has a bit more momentum. The song’s weakness is the filler “ooh-ooh-ooh”s that so plagues indie music in general, but its strength also lies in its lyrics: “And I will grow out of all the empty bottles in my closet / And you’ll quit having dreams about a swan dive to the hard asphalt.”

“Michel” (American Weekend) opens sad, sexy and resigned: “Hands under my clothes / we can’t let it go.” Chords progress slowly in these songs, so Crutchfield has to do a lot of work vocally. Fortunately, her voice and words are up to carrying the act. “La Loose,” (Ivy Tripp, 2015) has a sweeter sound, but the lyrics are still doubtful of romantic love. “You’re the only one I want watching me,” is tentatively honest, but the uncertainty is there too: “It could fade or wrinkle up / I don’t hold faith in much / I know that I feel more than you do / I selfishly want you here to stick to.”

Waxahatchee also plays several songs from a new, fourth album, Out in the Storm, due out July 14. These include “Fade,” “Sparks Fly ” and “Silver,” the last of which has a little more engine power.

After Waxahatchee leaves the stage, the crowd is noisy during the 40-minute break between sets. The room gets claustrophobic, physically first, and then olfactorily, as the scent of beer pervades the space. Claustrophobia aside, there’s something to be said for just being in a nice venue — the sound is great, you can actually see the performer and you can get as close as you want. There’s no seating, so you could stand with your elbows resting on the stage if you wanted (it’s a little high, but you could do it).

Finally taking the stage, The New Pornographers (NPs) are a big group. There are eight performers in all: two keyboardists, one drummer, three singers, a guitarist and a bassist. All dress casually — they wear jeans, khakis, t-shirts, plaid button-ups, even a baseball cap. The group’s been around for 20 years, so maybe the members aren’t too into costuming anymore.

The NPs are kind of old-school like that, as is the sound. If you like 80s pop, this is the stuff for you. The set includes “Dancehall Domine,” so the group is, at least, self-aware about their retro-ness. In “Champions of Red Wine,” the three women performers sing in great vocal harmony, throwing in some “La-la-la-la-lai-lais” (Think Simple Minds’ “Don’t You (Forget About Me)” and Haircut 100’s “Love Plus One”). The song “Use It” includes some lyrical gems as silly as the 80s, but with an edge millennials might appreciate: “Two sips from the cup of human kindness / And I’m shit faced, just laid to waste.” Another song in the set, “Moves,” also incorporates a contemporary twist when one of the women plays an electric violin. (I later looked up the music video, which turned out to be a wonderful choice. The Canadian group’s coolness went way up in my eyes solely due to the celebrities in the video: both Donald Glover and John Oliver briefly appear.)

While most of the songs they perform are bouncy, the ballad “Adventures in Solitude” is a crowd favorite. The lyrics are at their most coherent and heartfelt. For example, “We thought we lost you / welcome back” and “Less than forget / But more than begun / These adventures in solitude never done.”

The New Pornographers’ throwback sound is, overall, fun to listen to. Throughout the set, many people in the audience bop their heads or shimmy their shoulders side-to-side. Although by this point in the evening, the dancing may be in part alcohol-inspired. It may not be easy to get lit on a Tuesday night in Minnesota, but the audience sure does try.