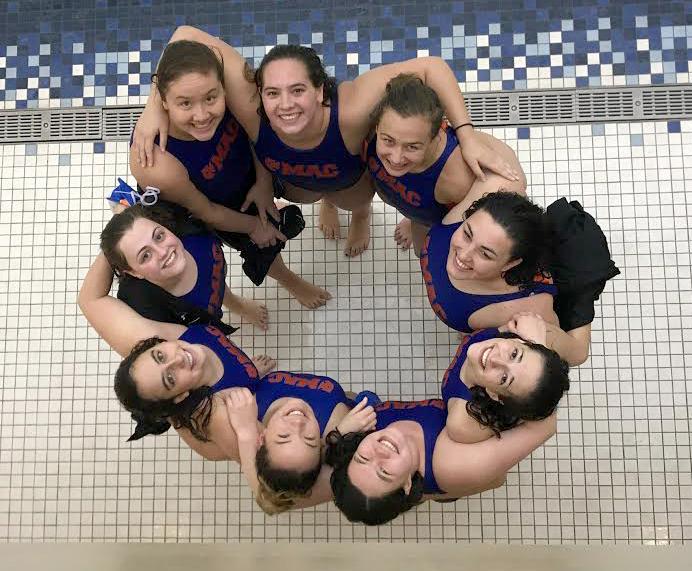 The water polo team poses for a picture together. They beat the Washington & Jefferson Presidents 10-9 in overtime to win the CWPA Championship for the first time in college history. Photo courtesy of Patti Andreski.[/caption]

The CWPA is the only conference that offers Division III women’s water polo outside of the state of California, which makes Sunday’s triumph the closest the Scots can come to a national title.

The women came into the tournament as the second seed, behind the Washington & Jefferson Presidents. They played their first game on Saturday afternoon against Grove City, which was an easy 11-3 win. They returned to action that evening against the third-seeded Lady Reds of Carthage College. While Carthage had a strong defense, the Scots never trailed, and used an explosive, four-goal second quarter to coast to a 10-2 win. Courtney Overland ’19, in particular, had a great game. She recorded 16 saves against Carthage, and was rewarded with a loud “MVP” chant from the excited Macalester fans.

The Scots’ true test came at 1 p.m. the next day. Riley Pool’s viewing deck was packed full of excited, though sweaty, Macalester fans. The air was humid, though it didn’t seem to bother the athletes. The Scots stuck to their pass-heavy play style, selecting their shots carefully and taking advantage of Washington & Jefferson’s mistakes. However, the first three quarters were low-scoring. Washington & Jefferson was a higher caliber opponent than Macalester had faced in the tournament, and remained competitive despite their lack of a lead through three quarters.

“We knew that they were gonna come out extra hard in the second half,” Overland said. “We kept telling each other, ‘The score’s 0-0, don’t look at the score, we need to play just as hard as we did in the first half.”

The Scots ran out of luck in the fourth quarter, when a disastrous series of events turned the game’s momentum against them. With mere minutes remaining in the game, Oriana Galasso ’20 received her third major foul of the game and was ejected from play. When head coach Scott Reed objected, he was given a yellow card as a conduct warning. Seconds later, Washington & Jefferson scored, which tied the game at 5-5.

“I don’t think we played badly,” Overland said. “They played better, I would say. They took advantage of the mistakes we were making.”

This was when the scoring began in earnest. Each team scored another goal in the waning minutes of the fourth quarter. With 1:02 remaining, Washington & Jefferson took its first lead of the game. The Scots remained unphased, and responded with a goal 13 seconds later. Regulation play ended with the teams tied 7-7.

In water polo, overtime consists of two three-minute periods. For these two teams, overtime was familiar; the first time they met during the regular season, Washington & Jefferson won 7-5 in double overtime.

The Scots probably weren’t dwelling on this loss. In fact, the Scots had an easy demeanor before overtime, and joked and laughed while they were waiting for the game to recommence.

Once overtime began, Macalester was all business. Natalie Hoffman ’19 scored 40 seconds into the first period, though the Presidents responded quickly. The frantic period ended with each team scoring two goals. The shootout continued into the second extra period, where the score remained 9-9. As sudden death drew nearer, the Scots made one last offensive push and, with 19 seconds remaining, Lucy Moran ’19 scored the go-ahead goal. While Washington & Jefferson had one final offensive possession, the Presidents’ shot was wide, and Macalester held onto the ball as time expired.

Macalester College seldom wins championships; a championship win at home is even rarer. The celebration that followed, then, was to be expected. Riley Pool was filled with the noise generated by the student section, a group of students who, in many cases, had never seen a water polo game before that weekend. Water polo, fortunately, is an accessible game, and the spectators were true believers after the Scots’ captivating tournament performance. “I loved the crowd,” Moran said. “I thought they were amazing. You know, we don’t get to play that many home tournaments, so I’m not used to having a lot of people cheering us on. They all seemed super into it, even though I don’t think anyone knew what was going on most of the time.”

For the athletes in the pool, the level of emotion was even higher. Swim caps were tossed into the air as the women swam to embrace one another. The coaching staff followed suit, jumping into the pool fully clothed. And why not? Women’s Water Polo went 4-20 last year. For a season of unprecedented success to end with a championship was the perfect ending for Macalester.

The CWPA should be scared. Macalester’s sweep of the conference’s individual awards is not a fluke, as Sunday’s victory proved. What’s more, the Scots are only graduating one player, Liz Kelleher ’17, and hope to grow in numbers. I asked Moran whether she thought the team will be this strong next year. “No doubt,” she said. “I think we’re a young team. As we continue to work and progress and grow and get to know each other, we’re going to be even better. Totally unstoppable.” She said. grinning, and then finished: “I don’t think people want to play us.”