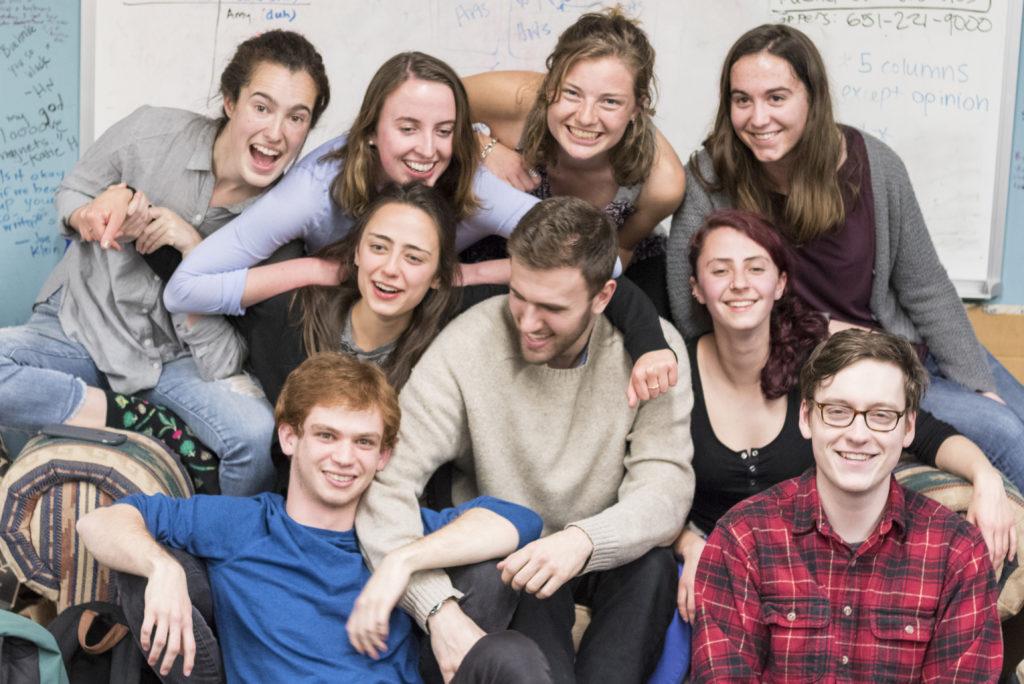 TMW: This is the last paper with all your names on it. First thoughts?

Kate Rhodes: I want to go to bed.

Jake N. Greenberg: I think our record for having stayed the latest is 5:15 a.m. I say we smash it tonight.

Max Horvath: Definitely want to be out tonight after the Star Trib is already delivered.

JNG: And that’s the only way Max tells time.

Maddie Jaffe: It’s that and whether or not McDonald’s is serving only breakfast. We got there at 4:30 a.m. and…

On that note, we have an either/or. Late night pizza or McDonald’s Drive Thru?

JNG: The best moment in Mac Weekly McDonald’s is we went and ordered, a bunch of different people got nuggets, and we ordered 32 nuggets, to which the woman at the drive thru asked us, “Do you do this often?”

AK: And then she came out of McDonald’s and hand-delivered them to the car.

MH: But, there was a more cost effective way.

MJ: There was also the time when we won a $25 gift card to a used book store from WMCN’s 24-hour radio show.

Let’s go back to basics. Why did you join the paper!?

KR: I joined halfway through first year for apparently no reason. I sat on the couch for six months and then was absorbed into the Arts section by this special Allie Korbey.

AK: You were also immediately the most social out of all of us. All of us were very quiet.

EF: We were the bright-eyed, bushy-tailed journalists, and you became editor and I decreased my participation.

KR: There used to be a lot of dancing on The Mac Weekly. I feel like now it’s just a general coolness.

JNG: Yeah, “Losing You” was a big part of the Weekly, and we lost that.

Rachel Wilson: And at the beginning they would flash the lights. It was super dramatic.

EF: What did we leave? What is our legacy?

AK: THE RE-STRUCTURING OF THE LEADERSHIP AND PAYMENT WITH THE ADMINISTRATION.

MJ: In terms of joining the paper, correct me if I’m wrong, I think I’m different from everyone here in that I’ve never written an article?

MJ: I think everyone has written very good articles, and I’ve written none.

RW: I joined the paper in order to write satirical food reviews.

RW: And then I quickly became News Editor. Sharp detour.

ER: I joined after Gilfix [’16] wrote a particularly inflammatory piece on women in sports and I decided the sports section needed a little gender parity.

Speaking of The Hege, how do you see the future of the TMW/Hege relationship?

JNG: The last four years, we have to be honest, have been an absolute disaster. When we got here it seemed like a genuine rivalry. But, thanks to cross-pollination, Jamie Goodin, Austin Parsons [’17], Lydia Karlson [’16], Will Milch [’19]…unfortunately we’re pretty tight as organizations now so it’s a disaster.

JGG: We just have fun parties together.

AK: I mean, I don’t think there can be a collab. I don’t see what that would look like. It’s not in the works.

KR: But, we’re all against Chanter.

JNG: I’m fully against Chanter and the arts.

JNG: One thing we absolutely ruined about The Mac Weekly is that we have no elegance.

What do we have instead of elegance now?

MH: We got red cords for graduation. We have knishes.

JGG: I think we have panache.

KR: But do we have ganache?

MH: We have knishes.

Eliza Ramsey: Jake once got called out hard for the devaluations of the contributions of a certain club team.

JNG: That’s true. I disrespected the Macalester Crew Club team. I mentioned that they hadn’t had a season in four years and they got very angry about that.

MH: Although that was an objective fact.

So we have a philosophical question. Can “Democracy Live in Darkness?”

JGG: Check it out in the Opinion section this week.

Be honest, did you buy a Milch visor?

KR: I almost bought one and then he told me he broke even, and now I don’t have the passion. He broke even like two weeks ago. The rugby coach bought one. I want to be gifted one at graduation, @Milch?

Is there a story or photo you always wanted to report or include?

MH: Something like “Way Back at Mac,” something that happened in the past.

ED: Yes, but it actually got written by Isaac Slaughter [’19] this year. I was obsessed with the WacPac for a long time.

JGG: The cracks in the Leonard Center’s foundation.

JGG: No, no, no the physical foundation.

So on top of having a flat roof, it has cracks in the foundation?

What’s the most awkward thing that happened in layout in four years?

MH: I mean [two of our co-Editors-in-Chief] were going back-and-forth between dating each other and not talking at all.

ER: We have dealt with our fair share of contention.

KR: Learning how to let people go from the staff.

ER: There have definitely been some tense basement meetings.

JGG: I just stay in my corner.

MH: All of the awkward situations, they’re highly classified, more than top secret. I don’t even know all the details.

MH: You know what I wanted to report on, more team profiles.

KR: We should just do baseball.

JNG: You don’t have a last question ready?

AK: I had a series of snap stories that were “Drake Jake” where he would be eating and jamming and reading spreads. And Jake exclusively reads spreads out loud. We appreciate you.

MJ: He reads to himself and rocks back and forth while he does it.

EF: I don’t know, I love seeing Jake transform into Editor-in-Chief. I always told you about that. Like [he’s] typically the most laid back guy, to see you be like cut-throat Editor-in-Chief is funny.

AK: You were so cut-throat, Jake.

MH: You cut so many throats.

Are there other nice memorable things? Are you lacking in good memories in The Mac Weekly department?

KR: Every gathering outside of the office.

JNG: I love The Mac Weekly. It’s been my favorite thing at Macalester, and it’s a wonderful place and everyone should write for it.

JNG: We’re never fake. And I love these people.

Any other closing thoughts?