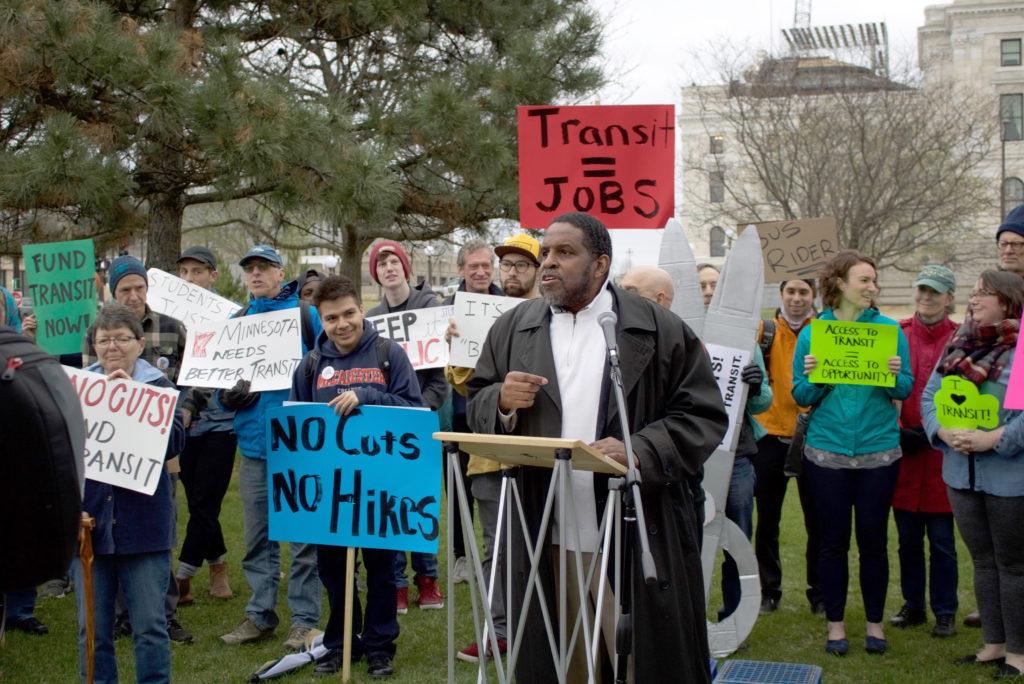 A group of 10 Macalester students joined a rally outside the Minnesota State Capitol on Tuesday evening to protest funding cuts to transit proposed in a recent transportation bill by the Republican-controlled state legislature.

Despite the dreary weather, the rally drew an energetic and diverse crowd of bicyclists — many of them wearing helmets — working adults, families both young and old, and seniors.

Jessica Treat, Executive Director of Transit for Livable Communities and one of several transit advocates who organized the rally, took to the podium first and outlined the demands of the rally.

Treat stated that organizers intend to force Governor Mark Dayton to veto the proposed cuts. Negotiating with Republicans is, for them, out of the question.

“Veto!” the crowd chanted in response.

Dayton, a Democrat, is arguably the only person who can stop the cuts, as Republicans hold majorities in both the state house and Senate—and have traditionally been hostile to transit funding.

Last year Republicans argued that funding for roads and bridges should trump rail expansion because the vast majority of Minnesotans drive. This latest effort to stymie transit funding has seen similar rhetoric.

The House Transportation Omnibus Bill (HF 861) will raise funding for roads and bridges largely through cuts to bus service in the Metro Area. To do so, the bill will slash funding to Metro Transit — the main transit agency in the Twin Cities which already suffers from a $74 million budget shortfall — by $122 million over the next two fiscal years.

These cuts will balloon the agency’s deficit to $140 million and could force a 40 percent reduction in service, involving bus route cuts, less frequent service, shorter operating hours and significant fare increases. HF 861 is still in committee and has yet to be introduced for debate.

“For us transit is not a frill, it’s a lifeline,” Treat said in her speech.

To illustrate her point, she invited regular transit users who rely solely on public transport to the podium. For these speakers, cuts would add several commute hours each day and upend their daily routines. “Do I have to walk across town? Because I’ve done that before,” proclaimed one rider.

If passed, HF 861 will affect a wide swathe of commuters. However, city residents without access to private vehicles will likely suffer most.

These include low-income communities and persons with disabilities who rely on Metro Mobility, the transit agency’s on-call shuttle for handicapped riders. It currently faces a $25 million budget shortfall.

“I suspect that [Republicans] think that this money is going to black people and black people are looking for a handout, [and] that’s not the case,” Reeves said. “All transit is subsidized around the world.”

Some attendees shouted, “Roads and bridges are also subsidized!” While the vast majority of attendees at the rally were white, according to the Minnesota State Demographic Center, people of color are more likely to live in poverty — and therefore more likely to rely on transit.

If anything, transit cuts are politically motivated. Republicans argue that their districts have been subsidizing public transport, a service which their constituents reap few benefits. Republicans mostly represent suburban and rural districts, which are less likely to rely on or have transit.

Nonetheless, out-of-metro areas receive 68 percent of transportation funding – yet contribute less than half the funds.

Furthermore, these cuts appear draconian in light of the $1.65 billion in general fund surpluses the state is forecasted to enjoy through mid-2019.

“This is borderline immoral. Who does this to people who are struggling?” Reeves said.

He hopes future rallies will draw a larger turnout. “If we fight, we can win!” he proclaimed.

Transit advocates passed around a petition at the event. They hope to get 10,000 signatures before presenting it to Governor Dayton.

Reeves is also looking to college students for support. He will meet regularly with Macalester Students United for Justice. The group distributed flyers and posted a Facebook event. However, they worked under a tight timeline having learned about the rally only last Thursday.

“It would be great if more students show up next time, but I think that it was a start,” said Armando Herrería ’20. The transit cuts will, Herrería said, “affect us as well to and from anywhere off campus.”

Transit advocates plan to hold a follow-up rally on May 16, which Students United for Justice intends to promote on campus.