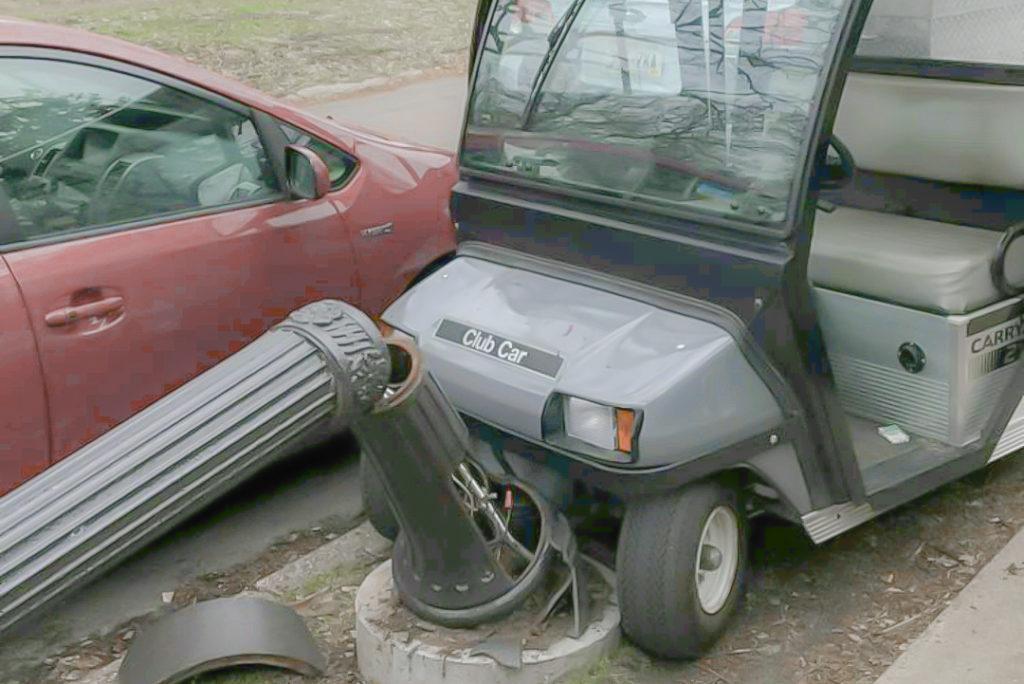 The immediate aftermath of the middle schoolers’ spree. Photo by Jack Streibich ’19.

Wednesday, April 12 was shaping up to be like any other rainy day for Jack Streibich ’19 — until he passed by a group of three Ramsey Middle School students gathered around one of the Macalester Facilities golf carts.

As Streibich watched, the group entered the golf cart parked outside George Draper Dayton Hall (GDD), and embarked on a 10-minute joyride that would end with the destruction of a city lamp post on Summit Avenue outside of Dupre Hall, damage to a red Prius and the arrest of one of the students.

Streibich described the moment he realized that the situation unfolding was beginning to resemble Grand Theft Auto. “I didn’t think to stop [the kids] yet, I was just kind of watching to see, because I’ve seen people hop in [the golf carts] and steal them before and maybe take them like two feet and then get out and sprint,” Streibich said. “But no, from there they put the pedal to the floor and went over some dirt and then straight down the sidewalk headed towards Macalester Street by GDD.”

As the middle schoolers began driving the stolen cart down Macalester street towards Dupre, Streibich followed on foot. According to Streibich, a group of about 30 middle schoolers then ran, cheering and screaming into the gap between him and the getaway golf cart before he could catch up.

It was at this point that roommates Katie Grahn ’19 and Addy Perkins ’19 noticed a loud commotion from the street outside of their Wallace dorm room. Grahn and Perkins ran from their room and joined the chase—worried about the middle schoolers’ safety as they drove ever closer and more erratically towards the intersection of Snelling and Summit avenues.

By this point, the underage drivers had garnered the attention of their peers and the Ramsey Middle School bus drivers on their routes home.

“They are still careening down Summit, and there’s now buses full of kids on Summit Avenue, and I can now hear bus drivers honking and screaming like, ‘Stop them, stop them, stop them!’” Streibich said. “There’s kids hanging their whole bodies out of the bus windows going like, ‘What are they doing? What’s up with that!? Take that golf cart!’ and they’re just chasing after them jogging.”

“I’m just a hundred yards behind, and I’m flying and the cart goes right onto Snelling—with no regard for human life,” Streibich continued. “They were going full speed, cars swerve and honk, and they make a turn in the middle of Snelling — like a right turn back onto the sidewalk by Dupre — so they make that turn and now they’re going back towards the kids….They’re still swerving, and I think they’re about to skid onto that brick wall by Dupre, and all of the sudden, smack.”

The golf cart made contact with the light post and parked red Prius, and the middle schoolers scattered. Grahn and Perkins said they then learned that there had been another witness to the frenzy who had called Saint Paul Police from his car.

The public police report said police responded to the scene by 2:13 p.m., 13 minutes after Ramsey students were dismissed for the day. They were followed by Campus Security.

After gathering statements from Grahn, Perkins and Streibich, the responding officers brought Streibich to a parking lot past O’Gara’s Bar and Grill where another set of officers had caught up with the middle schoolers. Streibich identified the 13-year-old suspect—who was then booked at a juvenile detention center.

Grahn and Perkins said they weren’t sure if they agreed with the final punishment.

“I think obviously the kids understand that they shouldn’t do what they did,” Perkins said. “I think it’s enough for them to know that’s not what you’re supposed to do, but I think that’s a little extreme. Like they’re little kids.”

Both Grahn and Perkins said there wasn’t much that could’ve been done to avoid the situation.

“I mean besides not leaving the keys in the golf cart,” Grahn said. “I don’t think it was like they had this idea to go steal a golf cart, I think it was more of an opportunity, curiosity and adrenaline. Like here’s this golf cart, it’s unattended. I don’t think there was any malicious intent there.”

“Since I have been at Macalester, we have had no similar incidents with utility carts that are used by approved staff members of the Facilities Services Department,” Collumbien wrote in an email to The Mac Weekly.

“As much as we hope we have planned for every possibility, unforeseen situations like this do arise, and when they do we review our operating procedures and make adjustments if necessary,” he continued. “We will also be reminding staff to make sure their carts, tools, and materials are secure at all times.”

Collumbien did mention that there had been “a few incidents involving youth from Ramsey Middle School” recently and that Macalester administrators had spoken with middle school officials about “monitoring” the Macalester campus at dismissal time.

Toya Stewart Downey, Interim Director of the Office of Communications, Marketing & Development for the Saint Paul Public Schools, said that while Ramsey Middle Schoolers were involved in the golf cart incident, the middle school will do everything in its power to continue to maintain a good relationship with the Macalester community.

“Ramsey strives to be a good neighbor to all residents in the area — families, citizens, businesses and most certainly Macalester,” Stewart Downey wrote in an email to The Mac Weekly. “There are Mac students who tutor at Ramsey, Mac students use the school’s green space, and Ramsey has used space at Mac. There is a good partnership between both the school and college and it will continue.”

Editor’s note: In the original publication of this article, Toya Stewart Downey’s name was misspelled.