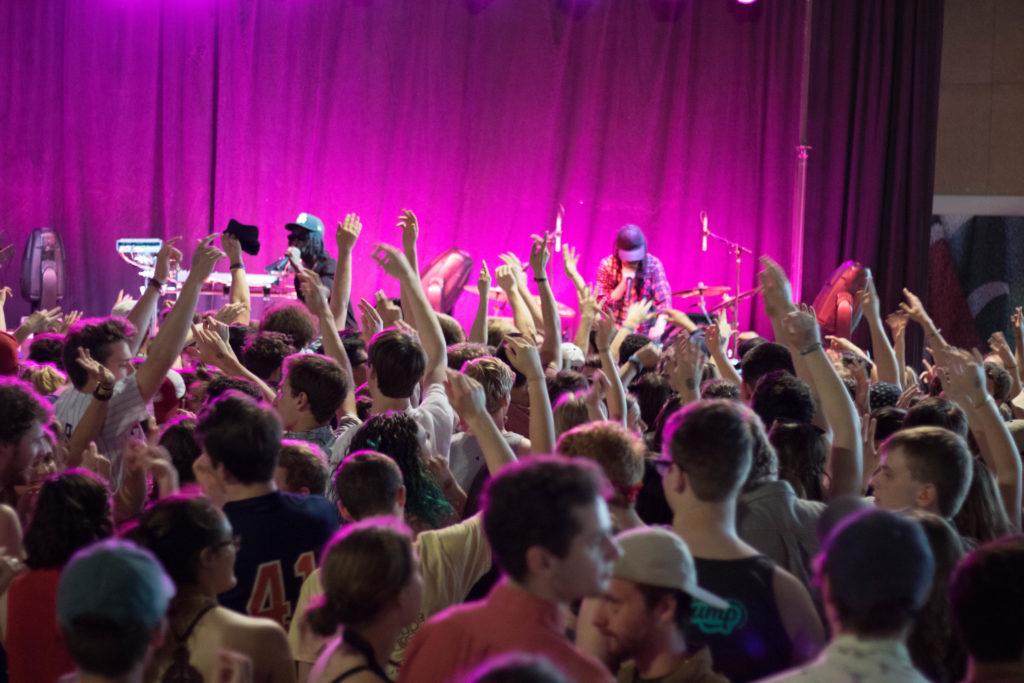 Jazz Cartier excites students and fans during his set at Springfest last Saturday in the Leonard Center Field House. Photo by Noah Zwiefel '19

Last Saturday, Macalester students piled into the Leonard Center Field House to attend Springfest, which, for the first time in recent years, was held indoors instead of its traditional outdoor location on Shaw Field.

“Until the day of, I thought ‘nobody is going to want to go to an inside Springfest. This is going to be awful’,” Szetela said. “But in the end, when we started to set up, I realized that this is actually a pretty cool space. Everyone that I’ve talked to has said that they have had a great time.”

“The fact that it’s inside doesn’t affect my experience in any way, shape, or form,” said Alia Baitie ’18, who had been anticipating Lion Babe’s performance for some time.

Shannon Mahedy ’17 agreed that location didn’t negatively impact her experience. “I feel like the people who are into it are really into it and they don’t really care whether it’s inside or outside.”

“I think it would have been a different story if it had been raining the whole day and people had been stuck inside,” Mahedy continued, “but we were able to go back and forth inside while [the performers] were setting up.”

The decision to move Springest from Shaw Field to the Field House was made on Thursday and communicated to the student body via The Daily Piper.

“We had been checking the weather for two weeks to watch the trend and when we saw that it consistently had rain and thunderstorms for Saturday we knew it was the right call to move indoors,” said Student Activities Coordinator Lerren Tyler in an email to The Mac Weekly. “We also had to keep in mind the condition of Shaw Field for the event. It had been raining all week and would have resulted in a very muddy field.”

The rain call was made Thursday to give the company providing the stage enough time to adequately stock its truck and install the set for the indoor performances. The Leonard Center staff also needed time to remove gear from the Field House in advance of the Saturday event.

Rice-Hoffner explained that the indoor location offered advantageous technical opportunities. “The lighting for Jazz Cartier, you wouldn’t have seen it outside,” Rice-Hoffner said. “Everything would have technically been the same outside, but you wouldn’t have been able to see it as well, because [the stage is] under a tent so the light bounces off of that.”

Though the Field House’s darkness contributed to the lighting works, Caroline Duncombe ’18 said the lack of light and sun exposure gave the event a different atmosphere. “It’s definitely two different events when you have it inside and outside, she said. “But I think that doesn’t necessarily affect the quality.”