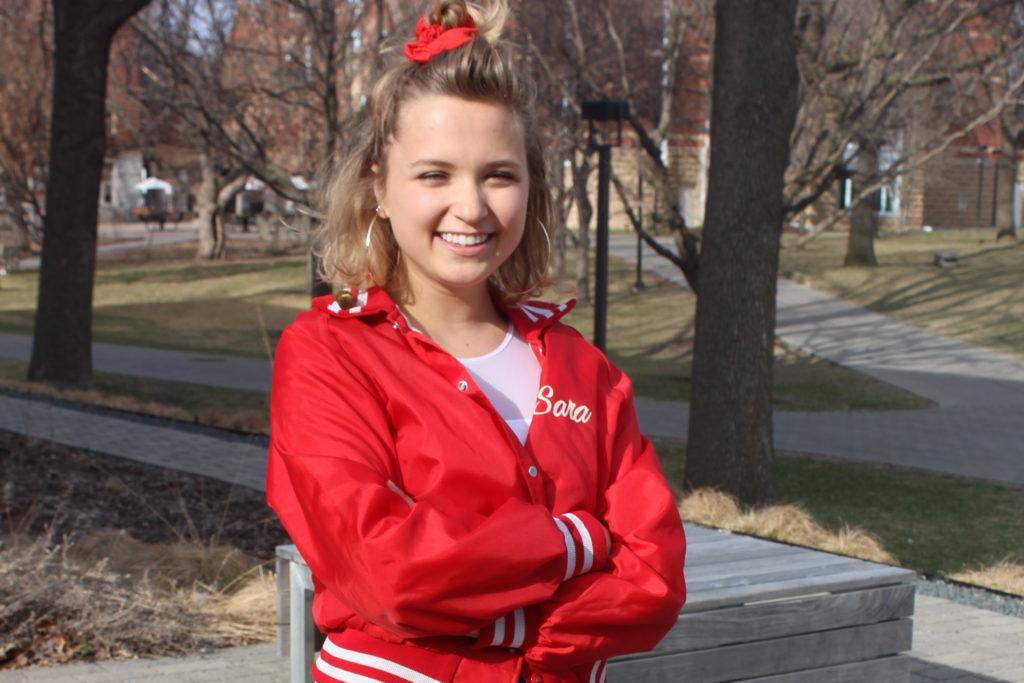 Aidan Teppema ’18 shows off her style. Photos by Emma Carray ’19.

Aidan Teppema ’18 has an easy confidence and infectious warmth. Her sunny personality and enthusiasm throughout the interview made it impossible to write this Style File inside. It seemed only fitting to write the article while basking in the sun on the lawn near Bateman Plaza on a 65-degree day. It’s hard to imagine a time in which Teppema wasn’t being her full self. However, Teppema’s style story includes instances in which she stifled her self-expression because it seemed to be the best way to fit in in college. Now a junior, Teppema has found her niche, and it’s exciting to hear about her evolution, from childhood to her junior year of college.

Point blank, Teppema explained, “I like to present myself well, I think. I don’t put a ton of effort into it, though.” Style is just something she does, especially since her parents have always allowed her to dress herself. She clarified, “They would buy me clothes, or people would gift me clothes, and they would say ‘go at it.’ I wore this orange t-shirt every single day of fourth grade. It was really atrocious.” This lack of concern regarding the opinions of others continued through middle school. Growing up in a suburb of Chicago, Teppema and her friends began wearing Converse and 3D glasses with the lenses punched out in eighth grade, choices which didn’t really break the mold, but were different from the adherence to brand names present in many suburban middle and high schools.

However, coming to college, Teppema wanted to fit in and make friends. She admitted that her style during her first year of college reflected that desire. She said that her style was “kind of basic. It was hipster basic: American apparel jeans, flannel shirts, and converse. It was pretty normal for Macalester.” While Teppema didn’t credit a specific event for changing her perspective, she did recognize cutting her long blonde hair into a blunt bob during her sophomore year as emblematic of her shift. As she described it, the cut was a “total post-breakup college move.” She continued, “It was one of those roommate-cutting-your-hair-in-the-bathroom things. I was so mad, and I had just broken up with my boyfriend.”

However, Teppema’s larger style shift stemmed from more than a break-up. She credited the fact that she “doesn’t care as much anymore.” Confidence in her schoolwork, her friendships and herself allowed Teppema to stop trying so hard to fit a certain mold. She explained, “I’ve deepened friendships, and strengthened my confidence in my studies and the things I’m interested in outside of looks and how people perceive me.”

Once Teppema gained confidence in herself and her own form of authentic expression, she stopped trying to please others. “Before, I would wear makeup to class, but now I don’t. I almost never wear bras. I pierced my nipple. Can I say that? The first time I stopped wearing a bra was summer after sophomore year. At the time, I think it was kind of weird. Since then, I’ve kind of owned it. It’s very freeing. I lost a bunch of my bras, so why bother?” she said. Choosing to stop caring about judgment never comes without pushback, and Teppema told a story about how her friend’s mom saw her from afar and made a judgmental comment to him about her lack of bra, to which he replied, “Mom, that’s my best friend!” Teppema laughed after telling this story. She doesn’t take criticism to heart.

Teppema’s also been influenced by a new interest in techno music. “I started listening to a lot of techno music this year, and going to a lot of techno shows. Everyone at those shows wears all black, straight-up only black. Since then, I’ve started adding more black to my wardrobe,” she said. She raved about The Exchange, a club in Minneapolis which plays techno every Sunday evening. She laughed as she said, “It’s called black mass. It’s like a church service.”

Teppema’s stylistic choices are also informed by nostalgia. She said she’s “interested in nostalgia as an emotion, so I wear a lot of ’90s or ’80s clothes, even though that wasn’t my generation.” She loves velvet and chokers. Her affinity for chokers stemmed from her friend’s adoption of the trend. She said, “I saw Sarah Lichter ‘16 wearing a choker in choir, and I loved it.”

For Teppema, her clothes and style mean more than simple appreciation for punk or the past. She mused that she returns to her style when she isn’t sure who she is. She also invests “a lot of emotion into the clothes I wear, because I’ve had them forever. Usually the clothes I wear feel very me. If I can’t speak my mind, I can show what I’m feeling,” she said. This aspect of her style was more apparent after the election of Trump.

Teppema explained, “My friend Rosa Druker ’16 made these shirts that said ‘All Nazis must die,’ and I wore that to a party, right after Trump started announcing all of those executive orders, and that was an intentional statement. I wanted to open up a dialogue with people, and it did. I had conversations with people about it all night.”

This was a valuable experience for Teppema, but it’s not the norm for her. She doesn’t usually attempt to convey specific political messages through her style. While conveying political messages is part of showing her authentic self through style, it’s more of the exception than the rule. Teppema usually adopts a carefree and relaxed approach to style that displays her authentic self.