Haunted Janet is victorious in the Battle of the Bands 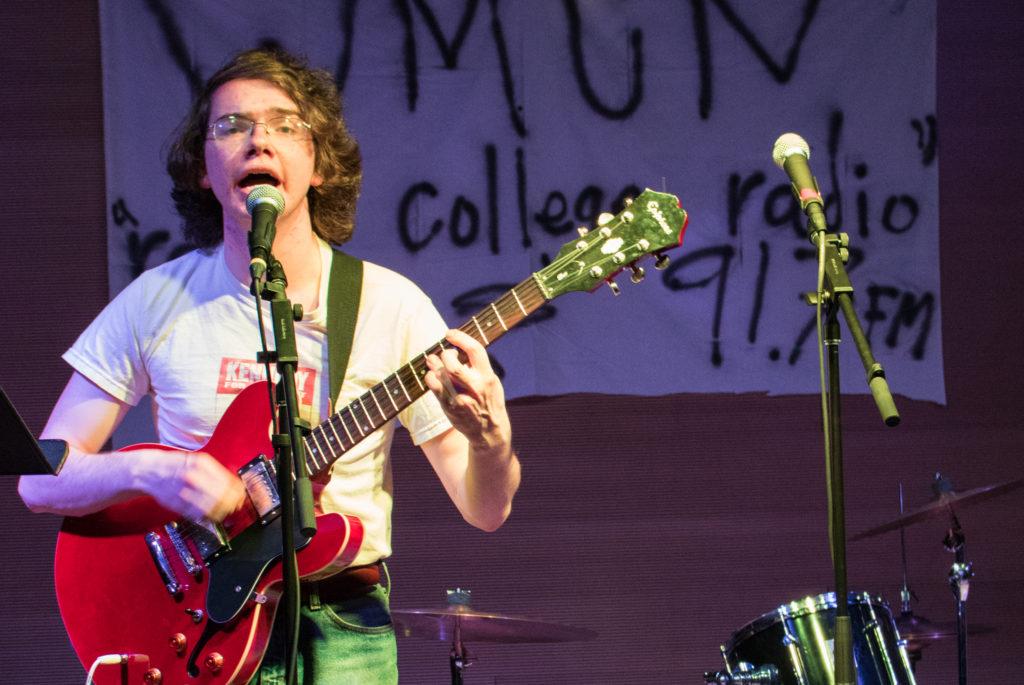 Spring has arrived at Macalester College, and for many students that means another season of music traditions. Shaw Field will soon be filled with amps and dancers, food trucks and temporary tattoos. Springfest is just a week away, and we can expect Lion Babe and Jazz Cartier to put on quite a show. Yet they will not be alone. On Saturday, April 15 Macalester will showcase a few of the school’s most talented performers, the members of Haunted Janet. This band competed amongst four others for the coveted Springfest slot in another one of our school’s traditions: Battle of the Bands.

Every year, musicians gather in the Loch after months of practice to perform for their fellow students, who fill the space from wall to wall. This year, indie battled bluegrass, progressive rock and virtuous pop for student votes. While some bands used popular covers to draw in listeners, others stuck to original songs and let their songwriting speak for itself. Either way, each band was open to taking risks, whether they be chromatic chord progressions or prominent vocal solos.

The first band to play was Astral Turf, whose sound showcases the well-developed connections between its three members: Eli Lilleskov ’17, Nick Michalesko ’17 and Micah Tanning ’17. They started off the night with some softer instrumental rock, developing a calmer atmosphere. But this calm did not last forever, and Astral Turf carefully choreographed its musical climaxes to take the audience by surprise. It’s easy to spot the similarities between the band’s name and style, as they members attempt to capture the ethereal nature of the stars. They still have room to develop their sound, and to take risks with their talents. While its difficult to deny Astral Turf’s talent, its instrumental rock style cost the band votes. Adding vocals may have gained the band popularity in this particular competition, but it was refreshing to hear a band perfect its instrumental chops without relying on lyrics.

After taking a trip through space with Astral Turf, the audience came careening back to land for the earthy vibes of Virtue Pop. Comprised of vocalist and guitarist José Keenan ’19, drummer Cleo Young ’17 and guitarist Christian Carroll, Virtue Pop is a curious blend of raw energy and musical precision. Keenan’s voice, with its touch of grit, contrasted with the bright major chords that make the band true to its name. With Young leading the charge with powerful drum solos, the band rose quickly from simple, catchy melodies to moments of discordant energy. While their light pop texture is reminiscent of Lily Allen or Car Seat Headrest, Keenan’s voice is straight out of the rock and roll world of Lou Reed and Radiohead. All in all, when Virtue Pop took the stage, it was difficult not to start dancing.

The next band, called Jack and Co., is the solo project of Jacques Libresco-Puckett ’19. He exhibited a different take on the pop rock genre than Virtue Pop, playing guitar to accompany his own voice. His songs ventured into the territory of rock ballads, drawing from ’90s influences and stripped-down punk. Sharing a link with more traditional forms of experimental rock, his style was reminiscent of classic bands like the Velvet Underground or the Barenaked Ladies. Though his song structures were simple, singer-songwriter beautiful, he added flare to his performance with engaging guitar riffs and lyrics that grabbed hold of the audience.

After Jack and Co. came another rock band, although this one showcased the fuller sound that came from having more performers, all of whom were incredibly versatile. Haunted Janet, having the most members and using the night’s only saxophone licks, was on top of its game to say the least. Featuring Jake Parskey ’19, Ian Cummings ’19, Corbin Dodd ’18 and Spike Sommers ’18, the band was able to weave complex rhythms and chords with depth. Dodd and Parskey took turns on lead vocals, using their contrasting voices to add more layers to the band’s sound. Dodd’s vocals were powerful and slightly rugged, and he expertly led the band through a rich collection of thoughtful lyrics. Parskey also sang with conviction, but with a notable twang similar to Tallest Man on Earth or Radiohead’s Thom Yorke. The band highlighted this connection by covering Radiohead’s “High and Dry.” Between some outstanding vocal solos and striking guitar, saxophone and drum lines to match, Haunted Janet held nothing back in its performance.

With a similar energy yet vastly different style, The Scouting Report finished out the battle. Core members Hannah Scout-Field ’17 and Ryan Dugan ’17 used their talents as vocalists to deliver striking lyrics. A few lines stuck out as particularly beautiful, such as the haunting words “1000 suns will set before you hear my call.” With these lyrics, along with the crooning lines of electric violin (Scout-Field), The Scouting Report easily drew listeners into its world. Henry Kellison ’17 (drums) and Ian Goodbar ’17 (bass guitar) lended to the drama and tension in each song, and the overall effect was something unique.

While each band presented something new to challenge the audience, only one could win the competition. In the end, Haunted Janet took the most votes and won the prize: a performing slot at Springfest. The players of Haunted Janet were well-deserving of the win, and will be set for another outstanding performance if they bring the same energy as they did at Battle of the Bands. Perhaps they’re on the road to an even bigger performance after this one.

Who can say where any of these bands will be after they leave Macalester? Only time will tell. But in the meantime, keep supporting the artists and musicians around you and you may be pleasantly surprised by the places they go.