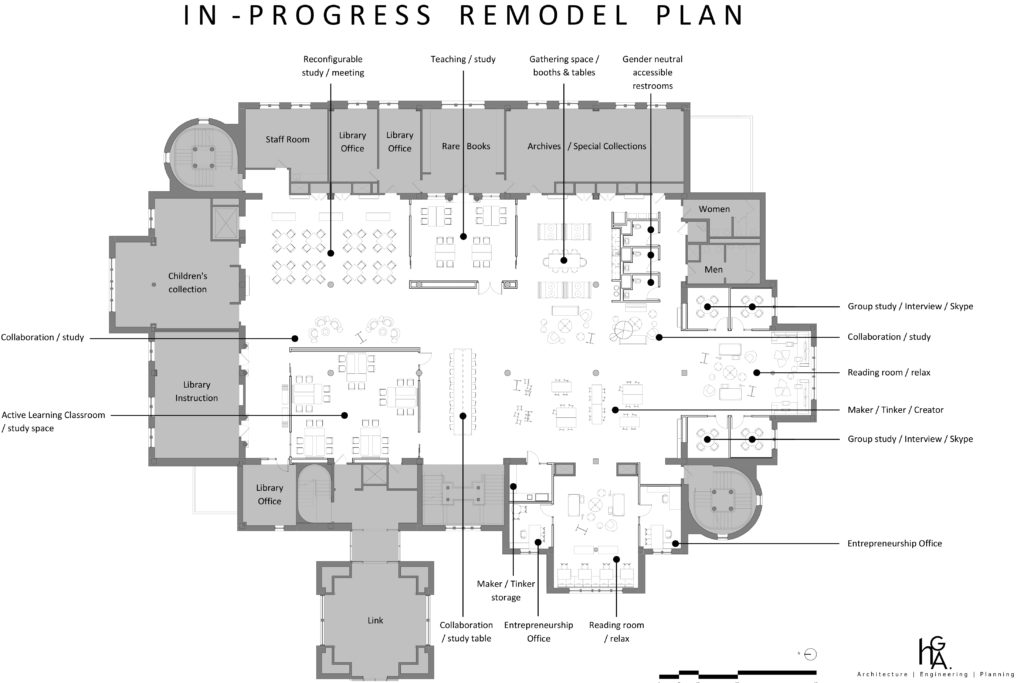 Preliminary floor plans for the second floor renovations include a maker space, a coffee bar and new offices for the entrepreneurship program. Existing reading rooms will be untouched or re-configured and new study space added. Grey sections along the periphery represent existing sections that will not be altered. Courtesy of David Wheaton.

]1 Preliminary floor plans for the second floor renovations include a maker space, a coffee bar and new offices for the entrepreneurship program. Existing reading rooms will be untouched or re-configured and new study space added. Grey sections along the periphery represent existing sections that will not be altered. Courtesy of David Wheaton.

The plan to re-purpose the second floor of the DeWitt Wallace Library as an entrepreneurship space continues to generate mixed reactions on campus.

Several proposals on Change.org reflect student concerns that the renovations, which are slated to occur this summer, will drastically alter the second floor. Students fear the loss of study spots and heavier use of the third and fourth floors.

In response, administrators have repeatedly guaranteed that the new space will fit the library’s atmosphere. Preliminary floor plans released to The Mac Weekly include two new classrooms, increased study areas, a maker space, a coffee bar and the retention of existing reading rooms while boosting the number of group study spaces.

The new classrooms — planned for seating 16 and 30 students respectively — will compensate for the loss of the theatre’s two classrooms when the building is demolished in December. The smaller classroom will be linked to the rare books collection, enabling classes to use these resources.

Study spaces will include collaboration areas with soft-seating. A long table seating 20 people will greet users at the entrance and is intended for group projects like designing protest banners. There will also be a flexible-use space located in the quieter part of the floor away from the maker-space that will contain movable tables, chairs and whiteboards.

The children’s reading room and classroom 206 will be untouched. Tucked into the corners of the two other reading rooms will be four new group study rooms and two new offices for the entrepreneurship program. The large windows in each room will remain and allow natural light to flow into the maker-space, which will be furnished with tools for hands-on work.

Administrators are considering procuring sewing machines, 3D printers and arts and crafts material, though no final decision has been made on the contents of the space. The coffee bar will sit behind the maker-space, and have booths similar to those in Café Mac.

The new space will boast significantly more power sockets than are currently available. The false ceiling will be removed and new light fixtures installed.

A total of 196 seats will occupy the floor, more than doubling the floor’s current capacity of 83 people, necessitating the building of three new single-stall bathrooms to conform with building codes. The stalls are slated for gender-neutral use, while the existing gender-neutral bathrooms will revert to single-gender use.

Flexible furniture will enable the space to be re-configured according to evolving student needs. Administrators envision ongoing student discussions once the space is open.

The library launched a webpage dedicated to the renovations. It contains an online feedback form and a list of discussion sessions to solicit student input. Three discussions were comprised of a brainstorming workshop facilitated by Entrepreneur in-Residence Kate Ryan Reiling ’00 in which participants were tasked with drawing up potential student needs.

However, some students said they feel they are being forced into a conversation on unwanted alterations. Patrick Eickman ’17, who attended Ryan Reiling’s workshops, said he prefers the second floor be left unchanged.

“The first time my feedback was essentially how I didn’t want this space to be created,” Eickman said. “I was told ‘you should come next time and tell us what you want in this space.’ It was odd.”

Eickman said he believes the administration is intent on pushing an entrepreneurship-focused agenda. “When I look at some of the plans Macalester has drawn up, like having a business incubator, I get scared as a humanities student and history major because I am unsure of where our place will be in the next 50 years,” he said.

Administrators contend that discussions on changes to the second floor began with the tabling of its “Vision 2020” in June 2013 and have continued since. It suggested expanding the second floor’s archives and rare book collection to take advantage of a smaller print holding.

Such plans reflect a worldwide trend of diversifying learning resources in libraries. Many peer libraries have made significant changes as a result. St. Olaf College’s library recently opened the Digital Scholarship Center—equipped with computers with special software and media equipment.

“Vision 2020” predates the College’s entrepreneurship goals, which first appeared in the strategic plan of January 2014. There are also practical reasons for integrating the entrepreneurship program into the revamped space.

The program’s two staff members, Ryan Reiling and coordinator Jody Emmings, currently occupy office space on Markim Hall’s first floor that is intended for the Dean of the Institute for Global Citizenship (IGC) — a position that will be filled with the arrival of Donna Maeda in the fall.

But some students feel the entrepreneurship program already has access to the Markim Hall basement, rendering the library space, especially the maker-space, unnecessary.

“It’s particularly frustrating that other spaces, namely 10K, have recently been closed, so it’s annoying to see a new space framed for the purposes of a [program] that already has a space”, said Travis Ahrenhoerster ’20, a member of Bad Comedy.

Administrators intend to keep the basement of Markim as is. “It’s used by the rest of the occupants of the [IGC] building,” said Vice President for Administration and Finance David Wheaton. “Some people think of it as the entrepreneurship space, but it’s not.”

To this point, he wrote in an email that “the amount of space specifically devoted to the Entrepreneurship program is about 300-square feet for the two offices, about 2 percent of the total [area].” The space will be open to programming from departments across campus.

Administrators have argued that the new space will echo Macalester’s definition of entrepreneurship as an inclusive field, grounded in creation across disciplines. “Libraries need to think of other ways to connect the dots, and [this is] a nice central place to do that, and by the way that kind of connecting of dots is what can happen when you try to do something entrepreneurial,” Wheaton said.

Similarly, Ryan Reiling said she views entrepreneurship as a tool for social change. “We want to give you every single tool, especially now, to go out and hack away the world that you want, and that’s what I imagine this to be… how do we create the change [to] make the world look a little bit like Macalester,” she said.

The new space has engendered debates over entrepreneurship’s place at Macalester. Jacob Weightman ’20 described the discourse as “divisive.” While some students agree with administrators, others argue entrepreneurship is an exclusive field because it relates to business and encourages students to think in terms of profit.

Ben Sydel ’18 said, “I personally see entrepreneurship as a tool that allows people, regardless of privilege, to have an opportunity to make the change that they want to see in the world.” He explained that “non-prof oriented methods of social change are incredible tools and have a historical precedent of being effective.”

Weightman echoed this sentiment and said, “To say that entrepreneurship is all about [profits] is a generalization.”

Eickman, however, is skeptical. He feels the college is distorting the true meaning of entrepreneurship. “When I google the term entrepreneurship, all the websites talk about starting and running a business,” he said. “You cannot just change a word to mean literally anything. For heaven’s sake, Marx could be an entrepreneur with [their] definition,” he added.