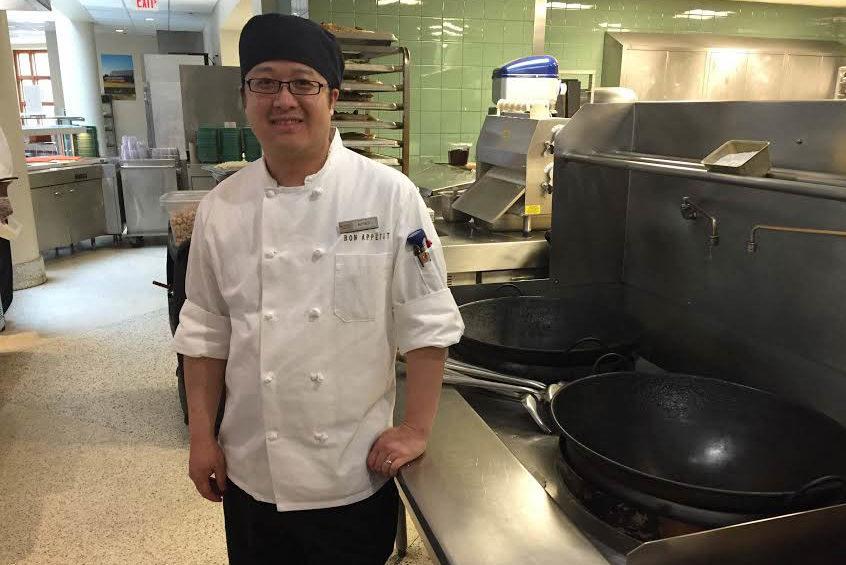 Bon Appétit has named Alfred Vang as its second Employee of the Month. Vang has been with Bon Appétit since November of 2011. Vang grew up in close proximity to the food and beverage industry: his parents owned a restaurant and at a young age he learned to cook. When Vang went away to school he was ready to leave behind the food and beverage industry, but felt constantly pulled back. At the age of 30 he enrolled in Le Cordon Bleu culinary school, and shortly after he landed an internship with Bon Appetit at the University of Northwestern in Saint Paul.

At Macalester, Vang is the cook for the East station. According to Amy Jackson, the Macalester Catering Director, “[Vang] is proud to say he always cooks from scratch [and] researches his recipes to make them as authentic as possible.” Some of Vang’s favorite dishes to make are Lo Meins and General Tso’s Chicken.

Outside of work, Vang enjoys entertaining friends and hosting special dinners at his home for Christmas and Valentine’s Day, among other holidays. According to Jackson, “[Vang] also enjoys working with his wife, who is a teacher during after-school programs for arts and crafts and Hmong studies.”

“It was really fun to learn about his background and how passionate he is about what he does,” Jackson said.
Vang aspires to be a sous chef or one day own a food truck that has “trendy Asian flare,” wrote Jackson in an email to The Mac Weekly.

The Employee of the Month program will select one employee to be spotlighted each month based on three criteria: safety, attendance and productivity. Nominations are submitted by the nine Bon Appétit managers, and the Director of Operations selects the winner.

Congratulations to Vang, and keep checking back to see biweekly updates from Bon Appétit.