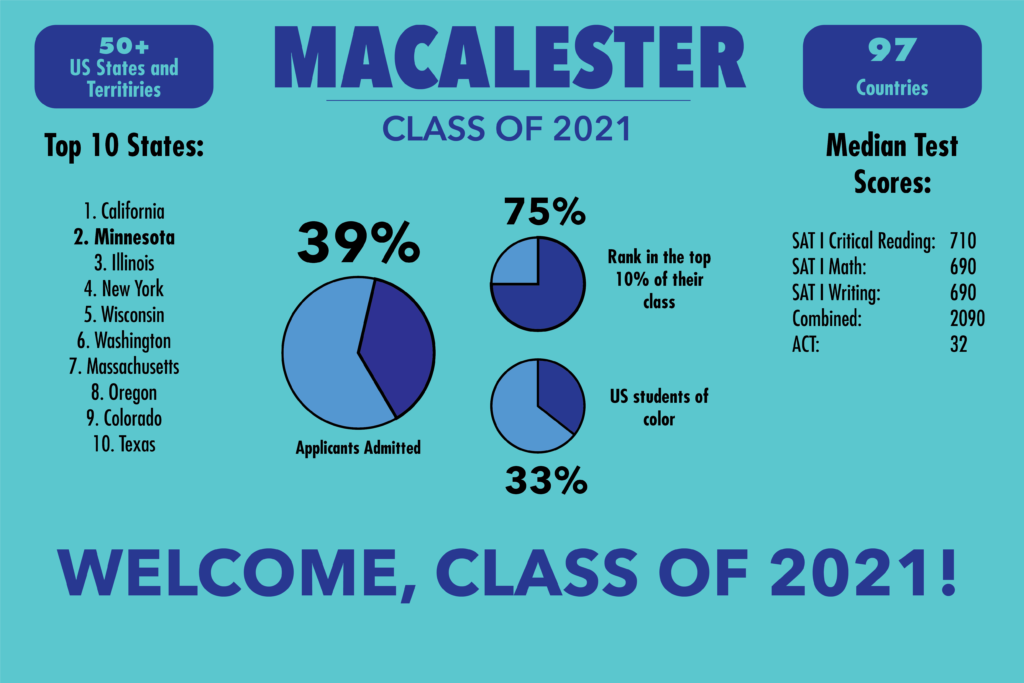 Over the past few weeks 5,901 students around the country and around the world received the long-awaited news of their acceptance into Macalester’s Class of 2021.

“It’s been a somewhat unusual year,” said Director of Admissions Jeffrey Allen. According to Allen, this year’s admissions process presented both unforeseen challenges and the introduction of a new program.

The Class of 2021 will be the first to welcome students participating in QuestBridge, a program that matches high-achieving, low-income students with prestigious colleges. Macalester announced the partnership last November, joining 37 peer institutions as a QuestBridge partner.

According to Allen, the eight QuestBridge students coming to Macalester next fall are not the only benefit that the program provides.

“We also saw a number of additional applications from students who had been a part of the QuestBridge process in general,” Allen said, referring to students who were finalists but not selected by QuestBridge.

“That was nice to see, particularly because some of those students come from the states and regions of the country that are less represented here on campus, particularly the South and the Southeast,” he continued.

The international admissions process, on the other hand, was complicated by the sudden passing of Director of International Admissions Steve Colee late last October. Colee had been at Macalester for 22 years and according to Allen, his loss left the Office of Admissions without a valued leader.

“We had to come up with a different plan to read and process those international applications, and that plan resulted in the need to delay the notification by a couple of weeks from when we would normally release decisions,” Allen said.

“When we get to the end of the admission process, the statistics look really similar, like the testing profile or the geographic profile,” Allen said. “Of course, the individuals are very different in some ways, but when you look at the numbers they’re very similar.”

The top 10 states of origin for the Class of 2021 include nine of the same states as the Class of 2020, with Colorado replacing Maryland. According to Allen, for the fifth admissions cycle in a row, Macalester admitted more students from California than Minnesota.

“We’ve obviously been spending a lot of time travelling to and recruiting in California, but it’s not to say that we wouldn’t love to see more Minnesotans applying,” Allen added.

Other statistics, like class rank, standardized testing scores and percentage of domestic students of color remained steady in comparison to previous years.

According to Allen, Macalester worked with Human Capital Research Corporation (HCRC), an external consultant based in Evanston, Illinois to build their admissions model. According to their website, HCRC “provides colleges and universities with advanced research and strategic guidance concerning enrollment management.”

“I think we’re doing the best we can to understand and try to predict what behavior will be when we admit students,” Allen said. Because Macalester competes with many elite schools for students, Allen said, it’s tricky to get the numbers just right.

“While we trust that we had all the information that we could have at the time of admission, there is still some uncertainty as to what can happen,” he said.