Grub on the Green Line: Foxy Falafel is as hot as it sounds 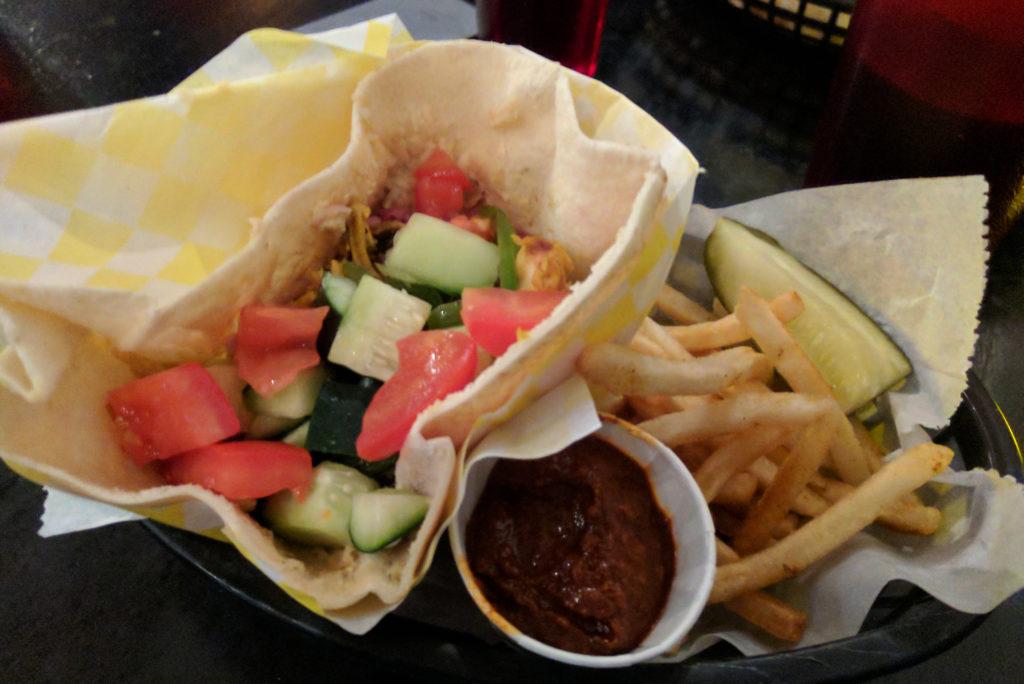 Chicken Shawarma in a pita pocket. Photo by Henry Nieberg ’19.

When I try a new restaurant each week, getting there isn’t very hard. I simply take the A Line north to University and Snelling, and then take the Green Line Light Rail to my destination. When I get some grub on the Green Line I usually head east. I am most unfamiliar with the area between Snelling and the University of Minnesota, however. So this week I decided to head west to the restaurant Foxy Falafel on Raymond Avenue and University Avenue.

I appreciated going to a part of the Twin Cities I hadn’t ventured to yet. When I got off at the University and Raymond station, I first noticed a pet store that specialized in reptiles, and a minute later there was a little hole-in-the-wall vinyl shop. This area, I noticed, seemed to have a lot more hidden gems than I expected. Nonetheless, Foxy Falafel was hard to find, wedged between two dull buildings, only sticking out with a dim “open” sign. When you walk in there isn’t a menu, but ordering should be very intuitive given the single large blackboard behind the cashier that has a flowchart describing how to order.

Foxy Falafel offers three different dishes: sandwiches, salads and platters. I went ahead and ordered the shawarma sandwich ($9), which consisted of a pita pocket filled with creamy chicken shawarma, a sauce and coarsely chopped tomatoes and cucumbers. There are three sauces to choose from: cucumber mint yogurt, green tahini and spicy harissa. I chose to get the spicy harissa. While I thought that the shawarma was above average — I really appreciated how it wasn’t dry or bland — I didn’t like the sauce as much. The sauce wasn’t spicy or flavorful. I would recommend going with the other sauces if you have the chance.

While the shawarma was decent, my favorite dish definitely had to be the falafel. It was fresh and recently fried. The sauces complement the falafel a lot better than the shawarma, and it was clear that the owners really nailed their recipe. Foxy Falafel started as a food truck, but following fan pressure they eventually opened up a restaurant. After eating here, I realized there was a good reason the restaurant isn’t called “Foxy Shawarma,” besides the name not rolling off the tongue with ease. Foxy Falafel cares a lot about its homemade sauces and falafel, and with the proximity to Macalester due to the Green Line and A Line, I would definitely recommend going there if you’re ever in the mood for falafel.