New theatre, dance building to be built after years of promises 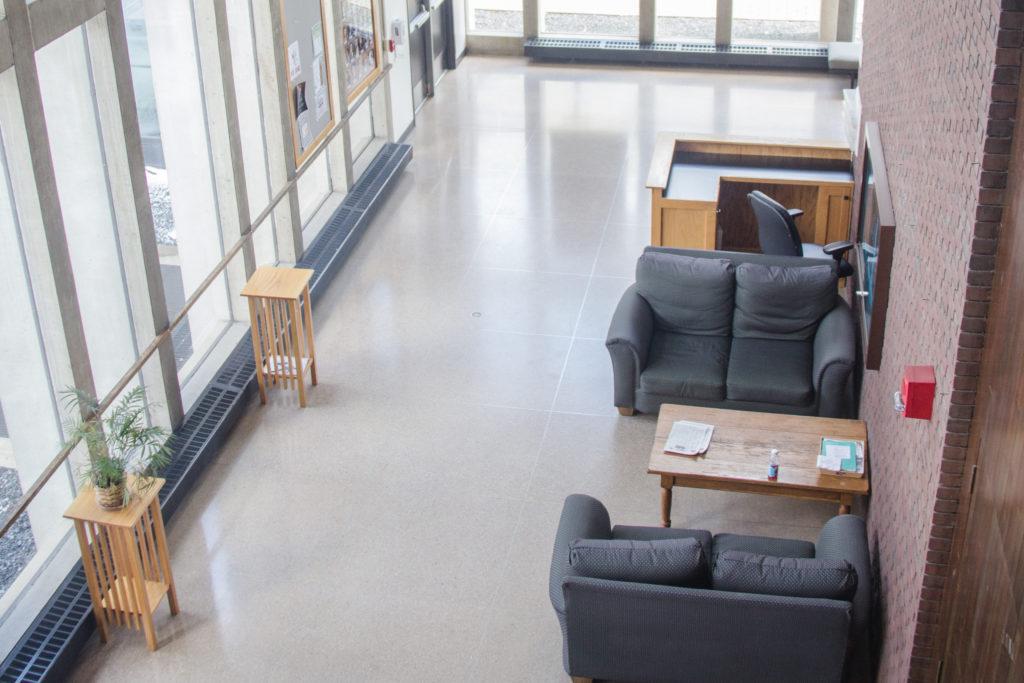 The new Theatre and Dance building will have improved performance and design spaces, as well as additional classrooms. Photo by Josh Koh ’18.

The third and final piece of the Janet Wallace Fine Arts Center renovation and expansion is on target to be completed by the spring of 2019: after years of waiting, Macalester’s Theatre and Dance (THDA) departments will gain a brand new building.

The first two phases of the project — the combination music-commons area and studio art building — opened in 2012 and spring 2014 respectively.

The new THDA building is being designed by the same architectural firm, HGA, as the music and art buildings.

The new building will include a first-floor dance studio and an experimental theatre mainstage, replacing the current proscenium.

The current THDA facility was constructed in 1967 and has not received substantial updates since then. That hasn’t been lost on Macalester’s administration or THDA faculty and students.

Provost Karine Moe wrote in an email that the decision to ultimately build new instead of renovating was influenced in part by ongoing discussions around space needs on campus.

“We have known for some time that the Theatre/Dance building needed renovation and improvements, and the need for those improvements were highlighted in our last strategic plan. The building is the last academic building to be renovated on campus, and we began to plan the renovations about a year ago,” Moe wrote.

Moe also wrote that Macalester “typically does not make official or public announcements about building projects at this early stage,” explaining why there has not yet been official information or cost estimates for the project available to the community.

Last year, Macalester hosted conversations that engaged students, staff and faculty on the issue of campus space utilization. From these conversations emerged one especially pressing need: classrooms. The new THDA building, in an effort to meet this need, will include at least nine multi-purpose, flexible classrooms.

“As we progressed on addressing both the need for classrooms and the needs in the [THDA] building, in the late fall it became clear that the most effective way to do both would be to tear down the existing [THDA] building,” Moe wrote.

Theatre Department Chair Harry Waters, Jr., for his part, said that alumni and community members have noticed a disconnect between the quality of art being produced and the facilities available.

“People were commenting on, ‘their works are so good, but why don’t they have a better building?’” Waters said. “We have a lot of alumni in the Twin Cities from 20, 25-plus years ago, and they have commented on the fact that it’s the same building they graduated from. People from the class of 1967 have come back and it’s the same building… that says a lot right there.”

Theatre majors Rafael Schneider ’17 and Bridget Gustafson ’17 heard as prospective students that a new facility was in the pipeline.

Despite these early rumblings, the feeling in the department once they arrived at Mac in 2013 was different.

“I think there was also sort of an awareness our first year — a sort of cynicism — that it wasn’t really going to happen; people didn’t believe it,” Gustafson said.

As Moe stated, the need for THDA improvements was outlined — albeit briefly — in the Strategic Plan, but its language did not seem to indicate a brand new building would be proposed only two years later. Schneider, for example, said that the language in the first draft of the plan discussed only a ‘basic needs’ renovation before that language was removed.

“Eventually, they changed the language in the Plan to take out the word ‘basic,’ but it was definitely made clear to THDA department faculty and students that they were not doing a new building and we had to get used to it,” Schneider said.

Waters corroborated this message, saying that, “the only mention in the Plan was that the THDA building was going to cost $50-$60 million dollars and that it was not going to be viable—that’s what we were told.”

The final language on THDA in the Plan echoes Waters’s words exactly: “It is important to complete the renovation of the Janet Wallace Fine Arts complex and to support our programs in theatre and dance.”

“It is not feasible in the near term, however, to commit anything on the order of $50 or $60 million toward that renovation. We should devise a renovation plan that meets that needs of the affected programs but that is more modest in scope and cost than the renovations envisioned prior to the recession.”

The figure “…came out of an estimate that was made 15 years ago for the entire complex, so I think it was an ‘alternate fact,’” Waters said.

The Studio Art building ultimately cost $20 million, while the music and Janet Wallace commons project cost $33.8 million—putting the $53.8 cost for two out of three legs of the full building in the ballpark of the old estimate that was made for the entire three-part complex. Waters estimated that the new THDA building will ultimately cost somewhere around $25 million.

Despite the cost challenges in past years, discussions of more minor alterations moved forward recently.

“Over the summer and last year, there were talks about, ‘We’re gonna put an elevator in one of the stairwells, and bring spaces in the costume shop and dressing rooms up to code,’” Gustafson said. “Basically, all they were gonna do was give us an elevator and call that fine.”

In the years since the Strategic Plan was published, Waters said that that “the dynamics in the department shifted. Our needs were changing, the dance program blew up—in a great way, every class was filled with students.”

At the same time, another major dynamic was at play: President Brian Rosenberg’s commitment to renovate the building.

“I personally was affirmed in several public meetings,” Waters continued. “Brian said to me, ‘Don’t worry Harry, I’m going to get you that new building. So there’s this running conversation between myself and Brian that we’re going to get a new building.”

Once conversations around what Waters described as “deferred maintenance” for the THDA building began, the budgetary calculus shifted in favor of a new building.

What will Theatre and Dance’s new home look like?

A preliminary architectural study directed by David Wheaton, Macalester’s Vice President for Administration and Finance, and other members of the administration included basic renovations and the addition of more square footage. Originally there was talk of adding a ground-level dance studio in the courtyard to the west of the building.

However, the Mac Space Study and a lack of classroom space in Olin-Rice made the administration consider adding first three, then six or more classrooms to the THDA building.

“Once those plans were laid out last year, the architect came to us and said that because of how old the building is, they thought we were approaching the place where the cost of doing the repairs and addition to the structure were approaching a cost similar to tearing the whole place down,” Wheaton said.

Following this news, Macalester asked HGA to design a brand-new building that included nine classrooms. The theatre department agreed to give up the need for a classic proscenium theatre and embrace a more flexible space.

This new vision led to the current working design for the new THDA building, which will take up the narrow courtyard currently separating the south side of the Janet Wallace and music building and the north side of the theatre building.

The north-south oriented theatre will likely be about 200-235 seats — as opposed to the current 263 — and there will be a much larger scene shop where students will be able to build an entire set instead of building on stage.

Wheaton said the new building will be connected to Olin-Rice via a south skyway and to Janet Wallace’s upper and lower levels, with Lowe Dayton Commons effectively serving as the theatre’s main large lobby.

Of the nine classrooms, seven large classrooms are planned to accommodate Olin-Rice classes on the second floor of the building.

“There will be at least one 60-student classroom, a few 20s, and likely three 30 and three 40-student classrooms,” Wheaton said. “The rooms can be used not only for teaching, but as gathering spaces in other ways. An important feature is that all of them will have completely flexible seating, moveable tables, good sightlines and fairly tall ceilings.”

The new dance studio will be located on the main floor, with windows facing the courtyard between Neil Hall, Janet Wallace and the existing THDA building. Unlike the current basement studio, it will have sprung floors, as well as a second and slightly smaller rehearsal space in the new building’s lower level.

Other theatre spaces, such as the green room and ‘black box’-type rehearsal spaces, will also be in the basement.

“There will be a black-box space — the size is going to be approximately the same as now — in addition to other possible educational classroom spaces that we will have control over,” Waters said.

The current plan is for faculty to move out of their offices in the summer, with a final mainstage theatre production and dance show in the fall.

“We’ll be out of here by Thanksgiving, and then the building will be going into the ground in December. Then we’ll be dispersed in various places across campus. They’re still looking for places for us to produce pieces,” Waters said.

A preliminary idea for the spring of 2018 that Waters has in mind would bring theatre all across campus.

“I’m planning on doing pop-up theatre in the spring, which will allow us to perform and be in the community. I’ve thought about the Leonard Center, Weyerhaeuser, the dormitories, the Campus Center and more,” Waters said.

Construction is planned for 2018 and should be completed by the spring of 2019. Waters anticipates that these disruptions will cause the department to lose some majors, while hopefully gaining some with the new building.

Theatre major Trevor Zapiecki ’19 has a few reservations about the timetable, but is excited about the project.

“I’m just happy it’s happening, but for them to start in spring and be done by the next spring seems really ambitious. Me and my friends are a little worried about having a building by the time we graduate, but I guess we’ll see what happens,” Zapiecki said.

Waters said he sees the new theatre spaces as fulfilling a long-held goal of his: greater student access to the performance space.

“One of the things I want to make available before I retire is that the student orgs could also have access to these spaces,” Waters said.

“It’s been hard since we have had to build our sets on stage, but with the large scene shop, we won’t have to anymore,” he continued. “To have that [student orgs using the spaces] on the regular would be so much more engaging for students and the college community.”