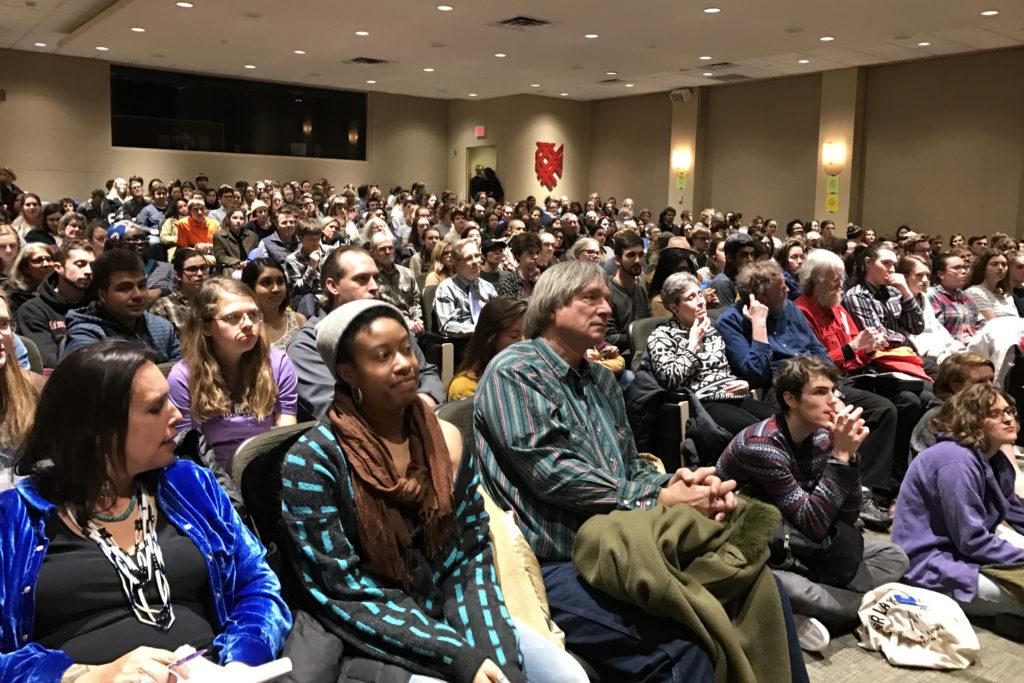 Jennifer Katz
An audience of Macalester community members and visitors crowded into JBD Lecture Hall to hear environmental activist Winona LaDuke speak on March 1. The room overflowed with spectators, who sat in the aisles and dragged in extra chairs when seating ran out.

LaDuke is best known for founding Honor the Earth, a nonprofit advocating for indigenous environmental justice that was active in organizing the protests against the Dakota Access Pipeline in 2016. She was the Green Party’s Vice Presidential nominee in 1996 and 2000.

In her hour-and-a-half talk, LaDuke discussed the impact of the fossil fuels industry and argued for investment in sustainable energy. Despite the grim nature of her subject matter, LaDuke spoke with wry humor and a conversational tone.

Referencing an Anishinaabe prophecy, LaDuke emphasized that the United States is at a crucial moment in regards to its energy policy.

“We’re in this moment in time where we have a choice to move between two paths,” LaDuke said. “One is well-worn, but scorched. The other is green. And it is our choice on which path to embark.”

LaDuke compared America’s dependence on fossil fuels to substance abuse and advocated for an “elegant transition out of the fossil fuels economy” to renewable energy sources.

“I want us to walk out of a tepee into a four-door Tesla,” she said, on the need for swift and effective change.

This change, she says, will also require Americans to adopt lifestyles that are less dependant on the use of fossil fuels.

“I’ve lived my whole life in the fossil fuels era. It’s been a total blast,” LaDuke said. “I flew around. I liked those kiwis, coconuts, avocados. Flowers the next day from Colombia. We got used to it.”

According to LaDuke, the fossil fuels industry is “a boom that has busted,” and oil companies are now using “extreme extraction” methods like fracking, strip mining, and deep-sea drilling to keep up with the high demand for fossil fuels.

“We consumed half the world’s known fossil fuels in my lifetime,” LaDuke said. “But in our last thrashing, they’re making a pretty darn good mess, huh?”

She supplemented her talk with pictures showing the damage that extreme extraction has done to the environment, from flooded coastal communities in Alaska to decimated coral reefs.

“This is what your ocean looks like on acid,” she quipped. “Mermaids are the only people who should be down 20,000 feet [underwater]. We should just stay out of some places and mind our business.”

“We’ve combusted ourselves into oblivion,” LaDuke said. “That is why the divestment movement is so important.”

LaDuke also emphasized that this is not just an environmental issue.

“I am not opposed to pipelines,” she said. “I like water and sewer, I think they’re fabulous. What we need in this country is infrastructure for people, not for oil companies.”

On what to do with the pipes that would be used for oil pipelines, she said, “Why don’t we just ship those pipes to Flint? That’s who needs infrastructure. To me, this is a social justice issue, this is a human rights issue.”

LaDuke thanked those in the audience who came to Standing Rock in solidarity last year and encouraged everyone to continue advocating for environmental justice.

“To me, this is about hate, greed and spite,” she said. “This is really a Selma moment for us. It is up to us to seize this moment and to build a unified movement.”

Elena Santarella ’19, a core member of Fossil Free Mac, said that she was energized and inspired by the event. During a question-and-answer sessions after her talk, LaDuke advised Santarella and other Fossil Free Mac members to be persistent in recruiting members and not let the administration just wait for the current members to graduate.

“A lot of us in Fossil Free Mac were getting beaten down and wondering, ‘Is this even worth it?’” Santarella said. “To have her reaffirm that divestment is important and building connections is important too was nice to hear.”

Encouraged by the large crowd’s enthusiasm for the event, Santarella hopes that the student body will take LaDuke’s message to heart.

“I think a lot of times on campus, people say, ‘Recycling? What does that do?’” Santarella said. “But what we do as an institution is bigger than that and our impact can be greater than that. Having people starting to make the connections and thinking about environmental justice can be a little challenging, so I hope her personal and powerful appeal woke people up.”