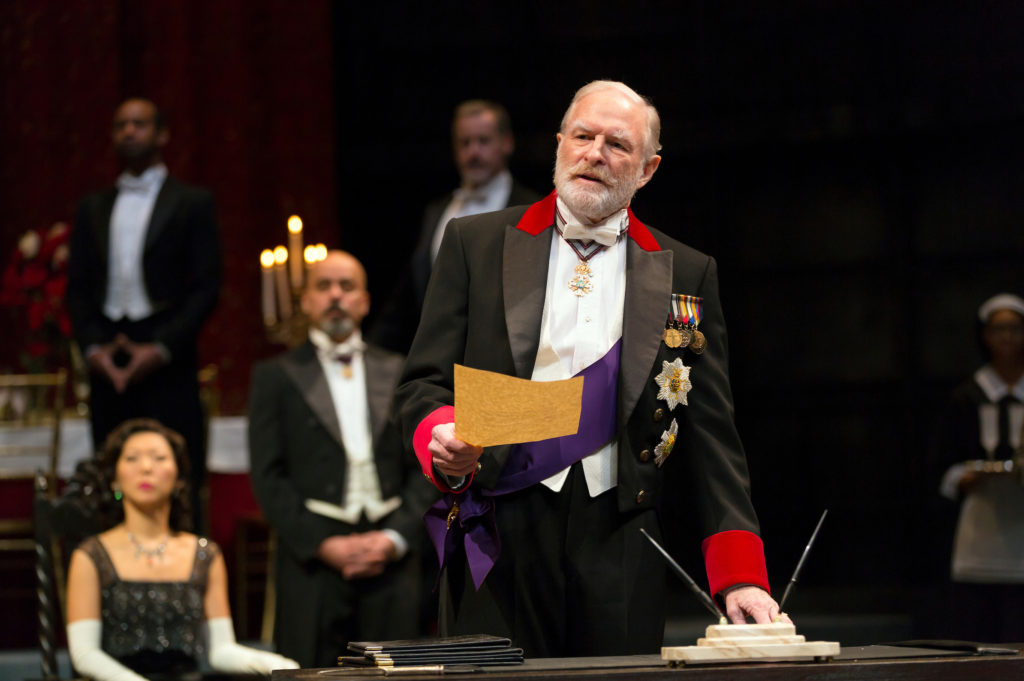 ing Lear is one of Shakespeare’s most intense tragedies, following Lear’s slow descent into madness after bequeathing his kingdom to two of his three daughters. It’s a painful and poetic play to watch, and aspects of it have been adapted into many different forms, from Jane Smiley’s novel A Thousand Acres to parts of The Godfather Part III. The Guthrie’s production opts for a traditional approach, with a simple and ambiguous vast gray set. It is a set that lends itself well to highlighting the impactful story. The Guthrie’s production does an admirable job of bringing the work to life through the consistent acting, the atmospheric set and lighting and purposeful staging.

King Lear opens with the titular character dividing his kingdom up among his three daughters: Goneril, Regan and Cordelia. The older two, Goneril and Regan, flatter the king, telling him how much they love him and desire to please him. However, Cordelia, the youngest, opts for honesty, telling the king she loves him as a daughter should. In anger, King Lear divides his kingdom between his two older daughters only and banishes Cordelia. As it becomes apparent, however, that his eldest daughters hold little respect for the aging king and intend to get rid of him, King Lear slowly descends into madness, and, as is typical of a Shakespearean tragedy, nearly everyone dies by the end of the play.

This particular production uses two actors to play the King: Stephen Yoakam and Nathaniel Fuller. On Friday night, I saw Stephen Yoakam as King Lear. With his stern white beard and commanding voice, Yoakam proves a powerful Lear, his descent into madness clear and potent. However, King Lear’s two sycophantic daughters, Goneril and Regan, played by Kate Nowlin and Sun Mee Chomet respectively, lean a tad too far into the melodrama in their most villainous scenes. In one key scene, for instance, Goneril tells King Lear that she intends to reduce his retinue of soldiers and treat him as the old man he is, not as the king. Her monologues are melodramatically villainous rather than spiteful and cruel, and King Lear’s hurt and horror in response seems less than justified. On the whole, however, the acting is consistent and striking. Thomas Brazzle’s portrayal of Edmund, the bastard son of the Duke of Gloucester, is particularly strong. His evil monologues, played earlier in the show more for laughs, become increasingly on edge and charismatic in their delivery as the intensity of the play increases. The supporting actors stood out as well. The Fool, played by Armin Shimerman, provides comedic relief and perspective through bawdy jokes and provocative questions, while Oswald, played by Kris L. Nelson, is a delightfully obsequious servant who manipulates his way into unforeseen scenarios.

The melodrama of the play is often heightened by sound cues, intense music that feel like a movie soundtrack. These auditory incursions seem unnecessary, and in my opinion detract from the otherwise compelling acting and staging. In the infamous scene in which one character has his eyes gouged out by Regan and her husband, the music felt cloying, and the audience broke into scattered laughter when a prop eyeball was dropped, an unfortunate reaction to an otherwise powerful and disturbing scene. When Regan leaps onto the Duke of Gloucester, intent on tearing his eye out, the screams of the Duke are more than enough to demonstrate the drama of the scene. The music cues make the most intense moments of the play seem more like horror movie scenes, rather than powerful explorations of human cruelty.

Many moments, however, feel exceedingly poignant and purposefully staged. In one scene shortly before intermission, where we realize how truly mad Lear has become, he and a few servants are elevated on a platform in the middle of the stage. Lear moves around boxes and barrels as he imagines his two daughters on trial for their crimes, and speaks wildly to his companions and the air about him. The Duke of Gloucester approaches the platform from the stage below, and in this particular moment, we are aware of how insane Lear is becoming — he is elevated above the rest of the stage, apart from the world of reality, and moreover, he has taken some of his companions with him: the Fool and the Duke of Kent cower on the edge of the platform, afraid to fall and afraid to be left with the King. It’s an exceptionally impactful and skillfully directed scene, and demonstrates the full capacity of the Guthrie stage to represent this troubling and disturbing play.

King Lear is justifiably one of Shakespeare’s best-known tragedies, and while it’s difficult to pull off a production that is both original and authentic, the Guthrie provides an excellent attempt. I recommend the show to anyone hoping to see a high-quality production of one of Shakespeare’s most powerful plays. It is an evening well worth enjoying.