In the Scouting Report, it’s all about the harmonies 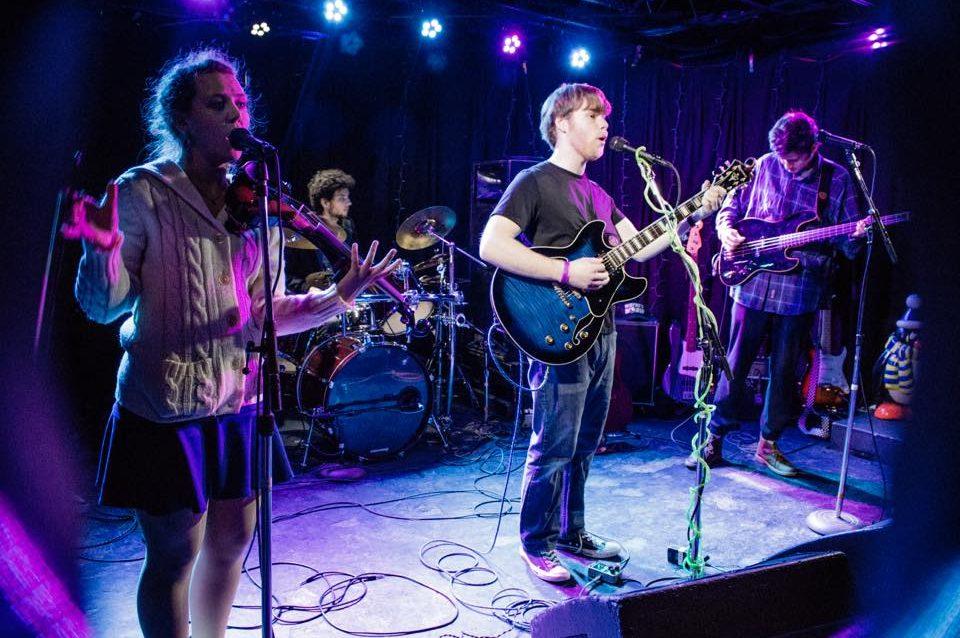 In the fall of 2013, Hannah Scout-Field ’17 and Ryan Dugan ’17 met in Macalester’s very own Crawford Hall. Scout-Field on violin, Dugan on guitar and both singing their hearts out, they jammed in the pop-jazz combos designed to bring Macalester students together. From then on, the two began rehearsing and developing their sound.

“There was chemistry,” Dugan says, describing his first encounter with Scout-Field. That chemistry still thrives in their band, the Scouting Report, which is named after Scout-Field. Having expanded since its origins as a duo band, the Scouting Report now features Jonah Lazarus ’17 on drums and Ian Goodbar ’17 on electric bass.The band plays in music venues all over the Twin Cities, and they are now recording for their new album.

The Mac Weekly sat down with Dugan and Scout-Field to discuss this new album, the band’s founding and the musical experiences that have shaped its founders.

TMW: Can you describe your most recent recording experience, the one back in late January?

Ryan Dugan: It was hard. You go in and out of periods of a lot of productivity and focus, and a couple of hours will be really good. And then you just get mad at everybody and really bad at your instrument. But then you come out of it. It has its ups and downs. I feel good about it, though. I think we got a lot accomplished.

What has been the most rewarding part of being in The Scouting Report so far?

Hannah Scout-Field: The harmonies. Ryan likes to write things that are harmonically intricate. He writes these harmonies with tritones, which are always very satisfying to sing. It’s not necessarily comfortable, but then it resolves and it’s so fun. It’s not just written willy-nilly.

RD: When people listen to you, they validate the emotions that you put into that art. It feels good when people are receptive to the art that you make.

HSF: There are a lot of ways to answer that question. The music itself is satisfying, but I guess I didn’t think about the audience’s perception.

RD: But you would be happy without the audience, too. You don’t do it so that people like you, but I’d be lying if I said that I don’t enjoy it when people say, “I like this tune, and this sounds cool.”

Has response from your audience ever caused you to shift how you write music and perform?

RD: I think what has changed us has been more the instrumentation, and Jonah, in particular. That’s restructured a lot of the way we play. We’re a full band now, and not a duo anymore. Just bringing more jazz influence changes the way we approach songs when we’re composing.

HSF: Thinking about the larger picture, being a music major or minor and taking classes like Theory 4 makes you question what even is music. Art is constantly evolving. There are rules, but rules can be broken, and new rules can be made. Is music supposed to be pleasing? There are all these social expectations, but music doesn’t necessarily have to do something. Being part of the music department and listening to what Randy [Bauer], Mark Mazullo and all these professors have to say about music as an art form and not just as something that people find pleasing to listen to — I’ve realized that there is so much more to it.

RD: It challenges your goal. I don’t know what our goal is … to have fun? To bring our art to the world?

Can you talk more about the challenge of writing music and how your writing style has developed over time?

RD: You can track phases. A lot of what I used to write was down the middle, like rock-and-roll. And looking back on that, it was really fun, but not interesting to me as I developed myself more. I go through phases when I like dissonance, or like playing with harmonies, or like arranging more violin. Now I’m in a cool guitar solo phase.

How might you describe your writing style today? How do you get the inspiration to begin writing something in the first place?

RD: I don’t often get inspiration anymore. I used to say, “Let me take something that’s really sad or really happy and play it on the guitar so that people can understand what I’m feeling.” But now, I’ll just watch Netflix, play guitar and hope that something happens.

HSF: Yeah, a lot of the violin parts that I’ve written have come from improvising. Ryan will just say, “Now improvise in this section.” And then, over time, a permanent part will come to fruition. I’ve only written one song of ours. It’s called “Order Something at the Grille,” inspired by the Grille at Macalester. There was this little ditty that I just happened to play one day that was intriguing. I wrote it for a string quartet originally, for Theory 2.

Going forward, do you plan to write more original songs for The Scouting Report, cover more songs written by other artists or continue with your current combination of both?

RD: I just use covers to fill time. I’ve gone through phases of my life when I’m really interested in taking covers and changing them around. But now, I don’t really care about that. We already have most of our next album, and I’m in the zone of a lot of originality right now.

HSF: Same. Covers are fun, but there’s a certain amount of guilt in playing them. Sometimes they’re crowd-pleasers. But in going forward, we ask ourselves what we like about covers, and if we can write our own music while incorporating those elements.

What particular bands or artists do you listen to and draw inspiration from?

RD: I like a lot of Elliott Smith, The National, Radiohead and The Decemberists.

HSF: I’m really into Lake Street Dive. I love their feel, and the lead singer’s vocals. I also really like the Real Vocal String Quartet. I am drawn to string quartet music, and they’re just so fun to listen to, with the rhythms and the energy they have. I’d love to write something like that.

If you could collaborate with any artist in the music world, who would you choose?

RD: I’m currently arranging something for Mama Caught Fire. They have a really cool vibe and layering harmonies. I like our vocal mix, but it would be interesting to toy around with the chemistry of other groups.

HSF: I’ve always wanted to sing with Rosie Hughes ’17. I’m in choir with Rosie, and I love her voice. Maybe she’ll read this article, and we could sing together sometime.