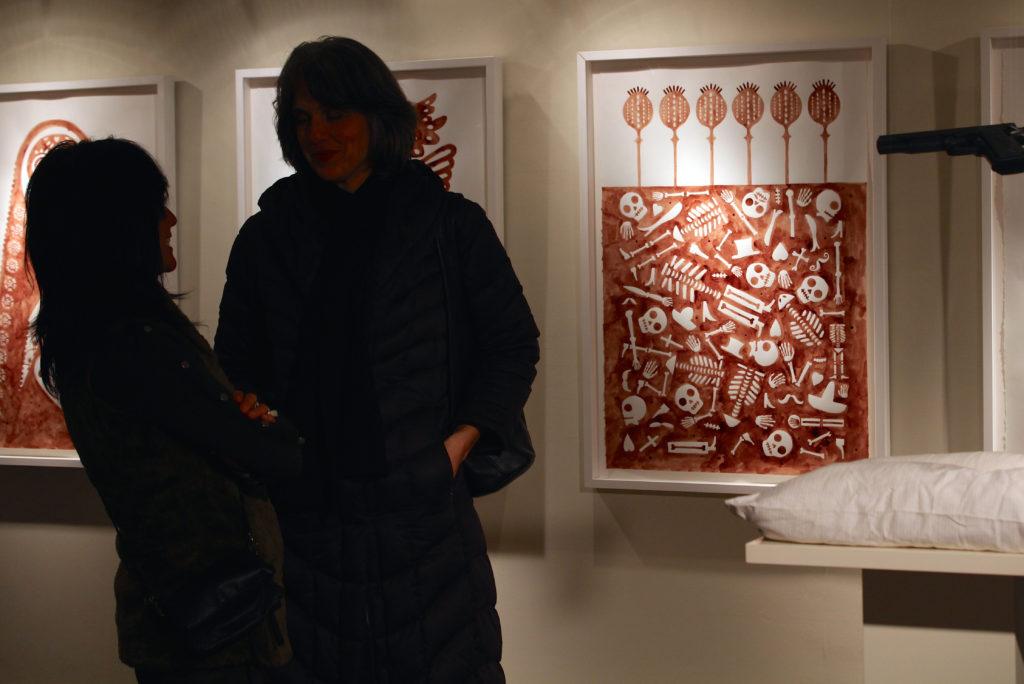 To the right, a pistol is suspended above a white pillow in an untitled piece by Gustavo Torres. In the background are Luis Fitch’s papel picado pieces that he painted with a mixture of water and his own blood. Photo courtesy of Adrianna Jereb.

A visa is required to enter, the curator informed visitors to the opening reception of the Latino, Art Migration exhibition at Concordia University’s gallery on February 2.

A “COP” (or so states the badge sewn to her uniform) examined paper “visas” passed out to visitors. She rubberstamped them “ENTRADA” and then pushed a button so a camera mounted on the wall blinked, supposedly taking the entrant’s photograph.

Inside the small, white-walled gallery, works by 15 artists, in media including video, collage, painting, pottery and installation arts, are on display through February 24.

Curator William G. Franklin, a professor at McNally Smith College of Music in St. Paul, started envisioning the show a year ago. “It had to do with everything that was happening in the world,” he said, referencing the refugee crises of Syria and North Africa.

Franklin said he hopes the show will transcend Latinx identities in its statements about migration. “We want it to have a universal impact,” Franklin said.

He began planning the show by reaching out to five artists he knew and networked from there to assemble the final group of 15 artists, all of whom are involved in the Latinx subject. Both emerging and established artists are represented in the show.

“It’s like an emotional puzzle that came together,” he said. Franklin said common themes, such as “nostalgia for a home left behind,” emerged as the artists collaborated.

According to the show’s installation assistant, Alex Poepping, the show pulls together pieces created two or three years ago and some done post-election, even as recently as within the last few weeks.

“It is insane how timely it’s become over the course of the past several months,” Poepping said of the show’s relationship to recent political developments in the United States. Aside from the political relevance, Poepping believes the show offers a focus on the personal experiences of migration.

These personal experiences take various forms of expression, although each work in the Latino, Art Migration show is a source of contemplation. An untitled work by Gustavo Torres juxtaposes two objects: a pistol suspended from the ceiling by three nylon strings hangs above a small white pillow resting on a column.

A series of six works by Luis Fitch resembles the style of Mexican papel picado — brightly colored, intricately-cut paper usually used as decoration for Día de los Muertos — in their skeleton motifs. However, Fitch’s works are all a faded rust-color. He painted them on large pieces of watercolor paper with a combination of water and his own blood. One titled “The Missing 43” references the 2014 Ayotzinapa incident in which 43 Mexican students disappeared, presumably kidnapped by police. The blood paintings are quite large, about two feet wide and three to four feet tall. Each piece features delicately painted skulls and scalloped edges, producing a jarring effect when put in contrast to the subject matter.

As Franklin said, “It’s not a show about contemplating pretty pictures.”

From across the room, “Vestige” by Jonathan Herrera looks something like two narrow coffins propped up against the wall and draped in lacy, black veils. The viewer must look through the peepholes in each box to see the illuminated artwork innards—small lithographs depicting a crumpled milk carton and a life vest.

While each of the works in the exhibit evoke emotional history, many of the artist’s statements — each written in both English and Spanish — make social and political connections. A photo by Andy Richter, titled “Altar de Día de Muertos, San Agustín Etla, Oaxaca,” is accompanied by an artist statement that includes the fact: “Two million Oaxacans live in the United States, while the population of the entire state is 3.1 million.” In a photograph titled “Illegal American Emigrates to Mexico” by Rubén Urrutia, a teen girl with red hair and scuffed high-tops hunches in the backseat of a truck filled with painting supplies. Urrutia’s artist statement reads: “I never thought Trump would win. Now that he is our president, this photo is still humorous but tinged with reality.”

This weaving of the personal and the political comes especially into focus in a contribution by Maria Cristina Tavera, an artist whose work has appeared at the National Museum of Mexican Art in Chicago. Tavera, who attended the opening reception, said that her family — her mother from Mexico, her father from St. Paul — often went back and forth between Mexico and the United States, driving from Minnesota to Mexico on at least one occasion.

Reflecting on the Latino, Art Migration show, Tavera said, “Some really challenging topics come up.” Her work “Import-Export Roots” includes several paintings and screenprints, one of which shows a woman smiling and holding up a hand to show off a ring. The title above reads “Sample Marriage Green Card Interview Questions.” The smiling woman is surrounded by questions that run from the expected “How, when and where did you meet your spouse?” to the absurd “Does he squeeze the toothpaste or roll the toothpaste?” and to the intimate “Do you trust your spouse?” “Do you think that your relationship will work?” This small piece of Tavera’s sprawling collection of prints and paintings questions the intrusive nature of such interviews, making it impossible for a viewer with no previous knowledge to distinguish between real and invented questions.

Leaving the exhibition, a COP stamped passes with a bold “SALIDA.” Exit. While “security” attended only the show’s opening reception, the visa ritual functioned as its own interactive work. Poepping, the installation assistant, was pleased to say that the arbitrary system — a process of mere minutes — frustrated a few visitors trying to enter the gallery.

The H. Williams Teaching Gallery of the Concordia Gallery is open from 10 a.m. to 4 p.m. Monday through Friday. The free exhibit extends through February 24.