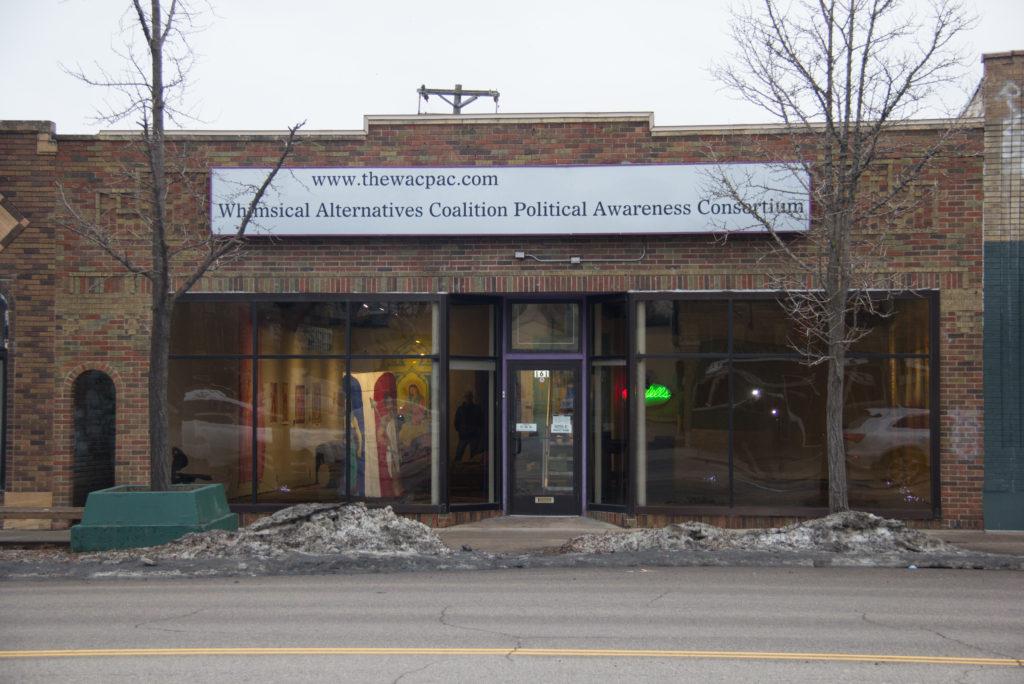 The view of the WACPAC from across Snelling Avenue. Photo by Josh Koh ’18.

161 Snelling Ave. sits among the many shops that fill up the Selby-Snelling intersection. Kitty-corner from Whole Foods, the building is nondescript, with a bland sign above. But if you look closer, it’s anything but normal.

“Always Open … No Admittance” reads the posted hours. The doors are locked. Nobody is inside. Still photos are projected on the wall. Just inside, you can see odd items strewn around: a tree stump, holiday lights, a movable staircase.

The sign out front reads “Whimsical Alternatives Coalition Political Awareness Consortium” (WACPAC), but other than a name, information on the WACPAC is hard to find. Its website shows only a 404 error. Its last social media posts were in 2014.

I spoke to Beth Nelson, who works in Sweatshop Fitness next door, and she said that although she hasn’t seen anyone enter the building in two years, the arrangement of objects in the window front often changes.

Nelson said, “It’s to make their political or social statements,” but when I asked, she was unsure what those statements were about or whom they were coming from.

According to public records, the 2016 taxes on the building were $14,070, a whole lot of money for someone to be paying to have it sit there.

A similarly-named Whimsical Alternatives Coalition Political Action Committee, based in Washington DC in the 1980s, sponsored a “Dollars for Dictators” charity event, presumably a joke.

According to the Center for Responsive Politics, this other WACPAC was an actual political action committee, spending money in the 1990 and 1992 elections. The organization did not exist after the 1998 election cycle. Aside from the name, it’s unclear if this WACPAC has any connection to the one on Snelling Ave.

I got in touch with Parker. He now lives in LA, but for a year, he did everything from finding artists to showcase to creating original art for WACPAC.

“The ideology for the WACPAC is to create art,” he said. “[Something] to make them stop and think, like ‘What is this? What does this mean to me? Does it mean anything at all?’”

Parker was not allowed to give out information of anyone else involved with WACPAC. But according to the owner of Sweatshop Fitness, Gayle Winegar ’76, the building that houses WACPAC has been owned by Webb White since before 1990.

In December, I set up an interview with Hend Al-Mansour, a local artist associated with the WACPAC. A few years ago Al-Mansour painted a tree stump, which was recently removed due to an ant infestation. After it was cut down, it was fumigated and now sits in WACPAC’s window.

Al-Mansour let me poke around 161 Snelling Ave. Behind the main room sit a few unfinished rooms and an office filled with notes.

Al-Mansour said she met White a few years back when she was walking by the building. She saw people inside and knocked on the door. A few months later she was working on the mural that covers one of WACPAC’s walls.

Shortly after, I received a text: “We look forward to meeting you at 1 o’clock.”
I called back and an older male voiced answered. I asked who I was speaking to, and the voice fired back cryptically that I was asking an existential question. He said that if I would only wait around a few minutes our paths would cross. I said I’d wait in the Starbucks on the corner.

Ten minutes later a tall white-haired man, wearing paint splattered workman’s jeans and a tattered sweatshirt, burst in and shouted my name. It was White. He told me that he was planning an event and that I was welcome to sit in.

We walked back to WACPAC. As we waited for everyone else to arrive, White pointed to nearby stores: Whole Foods, Starbucks and Buffalo Wild Wings. He said he wanted WACPAC to be “the resistance.” He reminisced about being able to walk into the community bank across the street and talk to someone on the board of directors.

The first people to show up were Julie Reiter and Michael Johnson from Union Park District Council, a community nonprofit organization. Saed Kakish, who owns Cahoots, and pianist Ora Itkin followed. Al-Mansour would be repainting the stump, and they were planning an event to celebrate.

The meeting was anticlimactic. White wouldn’t let me record the conversation or take notes, but it was mundane. They discussed dates for the event and whether to buy or rent a piano for the night. White seemed to zone out for much of it, allowing the others to do the talking. As things came to a close, he kicked me out.

I called White a few weeks later, and he was more open to talking. He told me that he purchased the building around 1983. He had a photography store there until recently, when he gave the business to the then-store manager. In January of 2014, the studio moved away, and White created WACPAC. He took the name from the Washington DC WACPAC, but didn’t want to have to deal with the regulations of being an actual Political Action Committee.

White didn’t intend for WACPAC to be secretive, but that he wanted people to hear about it from others in the know. He said that WACPAC has become a “salon.”

“Things sort of germinate slowly in their time,” he went on. “So I cannot say to you that this was our intention going right out of the shoot. Our intention was to give a small group of us a place to create, and create God only knows what. It doesn’t matter, just as long as there’s something creative happening there.”

Recently, WACPAC hosted an event for community members to help design a mural for a pedestrian bridge over I-94 in late 2016, and, in the spring, people will be able to paint the bridge with the design.

The unveiling for the tree stump happened on January 19. From the street, you could see 20 or so people orbiting. I opened the door, or tried to; it was still locked.

After someone let me in I circulated through the crowd. A few high school students attended, but most of the attendees were older. Artwork by Al-Mansour hung on the walls. There was a piano recital by Itkin, belly dancers and refreshments: cheese, wine and Twizzlers.

White said that there is currently a group using the space to design and build an industrial mobile.

“With God as my witness, I’m not entirely sure what an industrial mobile is,” he said. “But what it is is a piece of art. We don’t know what it’s going to look like, and we don’t know how long it’s going to take, and when it’s all over and done, you can be assured of one thing: there will be a party for it’s opening. That’s part of what the WACPAC does. It is a place where strange ideas can come together to germinate, maybe. If I could be more vague than that I surely would be.”