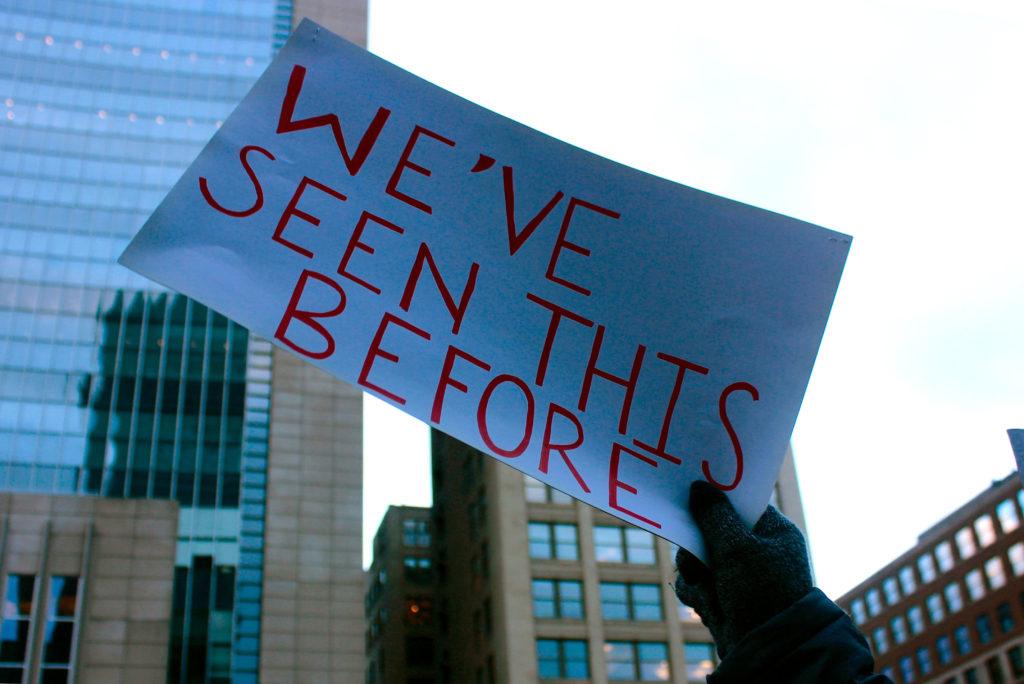 President Donald Trump’s executive order last Friday, January 27, banning immigration from seven predominantly Muslim countries has thrown the Macalester community — along with the world around it — into tumult.

The order shuts down all immigration from Iraq, Iran, Syria, Yemen, Sudan, Libya and Somalia for a period of three months, and bans Syrian refugees indefinitely.

“It wasn’t particularly surprising, but that doesn’t mean it was any less heart-wrenching for us,” said Kara Warren, International Student Programs Coordinator. “It affects not only the students, but their families. Families who were coming for graduation may not be able to do so now.”

Due to the order, International Student Programs (ISP) is advising a number of potentially impacted international students to, for the time being, remain in the United States and not travel abroad.

“You always have problems when you cross a border. Regardless of situation, you’re safest with where you’re at,” said Luyan Phan, Assistant Director of ISP. “If you’re a student from one of those countries, stay put. If you’re a dual national, stay put. You can travel if you’re a permanent resident or green card holder, but things can change while you’re away.”

Gawtry, who is a retired U.S. Customs and Border Protection Officer, went on to compare the situation unfavorably to the months following the attacks of September 11, 2001.

“There were restrictions for a few months right after, but they weren’t as comprehensive or as unfocused. It’s really not justified why they picked the seven countries they did. This is much worse than what happened after 9/11,” he said.

Macalester President Brian Rosenberg denounced the executive action in a letter released Monday morning, calling President Trump’s executive order “cowardly and cruel,” and wrote that it “make[s] a mockery of the claim that we are a country of generosity and decency.”

Rosenberg’s opposition to President Trump is not new. In a July Huffington Post article, Rosenberg compared the then-Republican nominee to Star Wars villain Emperor Palpatine and took aim at him again in a late-August address to the school.

Rosenberg pledged the institution’s full support to all those impacted by the ban, writing, “Our highest priority will be the welfare of those in our community who are most affected and most vulnerable… There will be no uncertainty about where we stand.”

Among other things, Rosenberg offered the school’s help with financial aid, housing, legal help and counseling. His statement claimed that other institutions have been too timid in their responses to the administration’s order.

The order has already thrown the lives of students at Macalester and people across the country into uncertainty.

“It’s pretty stressful,” one foreign-born student told The Mac Weekly. “My situation in the U.S. was already quite precarious. This means that if something comes up and I have to leave, I can’t come back — even though I’m on a valid visa.”

“I’m very familiar with what a dictator looks like. I grew up under a dictatorship,” the same student said. “When you see that even citizens are subject to these changes, of course international students would be even more subject. We’re easily removable.”

Would that student still have decided to come to Macalester, knowing what they know now?

“I was searching for security and stability, and I believed that wherever I went I would contribute to the community. But if I don’t get stability in return, it doesn’t end up being worth it,” the student said.

That being said, there has been a silver lining to the first two weeks of the Trump presidency for the student.

“People have been ridiculously supportive, and ridiculously kind to me. I’ve received messages from so many people, including Macalester people, checking on me, supporting me, and even offering their resources at this time,” the student, who also attended a US high school, said.

“There are extremely kind people in this country. I will never forget that.”

Taren Kingser, who works at the Annual Fund and volunteers for ISP, said, “One heartening thing that came out of this is an outpouring of support from Macalester alumni, who responded en masse to President Rosenberg’s letter, and offered support in any number of ways.”

Macalester had a sizable contingent of students and faculty members at both the Women’s March on the Saturday after President Trump’s inauguration and a Minneapolis event on Tuesday night protesting the Muslim ban.

International students, however, have been urged by the school not to attend protests or political rallies for fear of arrest and potential deportation. Several students were sent an email on Monday, January 30, telling them to defer all media requests to the communications office.

Partially because of the haphazard way the ban was rolled out, there is a great deal of uncertainty about how exactly it will impact the school and its students going forward.

“At this point, there’s just so much we don’t know about how it will impact Admissions down the road — other than to say that the message is pretty clear that the U.S. isn’t very welcoming to students from around the world,” Director of Admissions Lorne T. Robinson wrote in an e-mail to The Mac Weekly.

For much of the year, a group of Macalester students have been working on a program that would bring three Syrian students to the school per year. The group had met with Rosenberg, amongst other administration officials, and had identified a series of potential partner organizations.

For now, though, the effort — which would largely impact people who would not have access to higher education otherwise — is on hold. “It looks unfeasible at the moment,” a member of the planning team told The Mac Weekly.

Robinson did say that he’s hearing about major spikes in international applications to Canadian schools for the upcoming 2017–18 school year. Canada, under the leadership of Prime Minister Justin Trudeau, has declared itself open to immigrants and refugees.

Considering Macalester’s commitment to internationalism and international students — roughly 25 percent of current students are citizens of a country besides the US — Trump’s immigration policies could alter the very makeup of the school.

“He [Trump] is telling all Muslim students to stay away. It’s pretty clear,” Gawtry said. “If you were a Muslim student, in Egypt, for example, why would you pick a school in the United States over a good university in Canada?”

As of last year there were over one million international students and scholars in the United States contributing more than $30 billion to the country’s economy.

Looking towards the future

Phan said that, in addition to the fact that certain students can’t go home to visit their families without risking their education, “no one knows how tight they [the government] are going to be on issuing visas to students from the seven countries — even if the ban is over.”

ISP has also heard from a number of students in the last week concerned with their careers after college. International students have, in the past, sought out opportunities to remain in the country after graduation. That opportunity may no longer be available.

According to ISP, no Macalester students have yet required legal counsel — but the department does know of immigration attorneys in the area should the need arise.

The school has been in close and regular communication with its international and Muslim students since the election in November, and that will continue into the foreseeable future.

“It’s a sad time for international students and scholars,” Gawtry said. “We’re at a low point.”