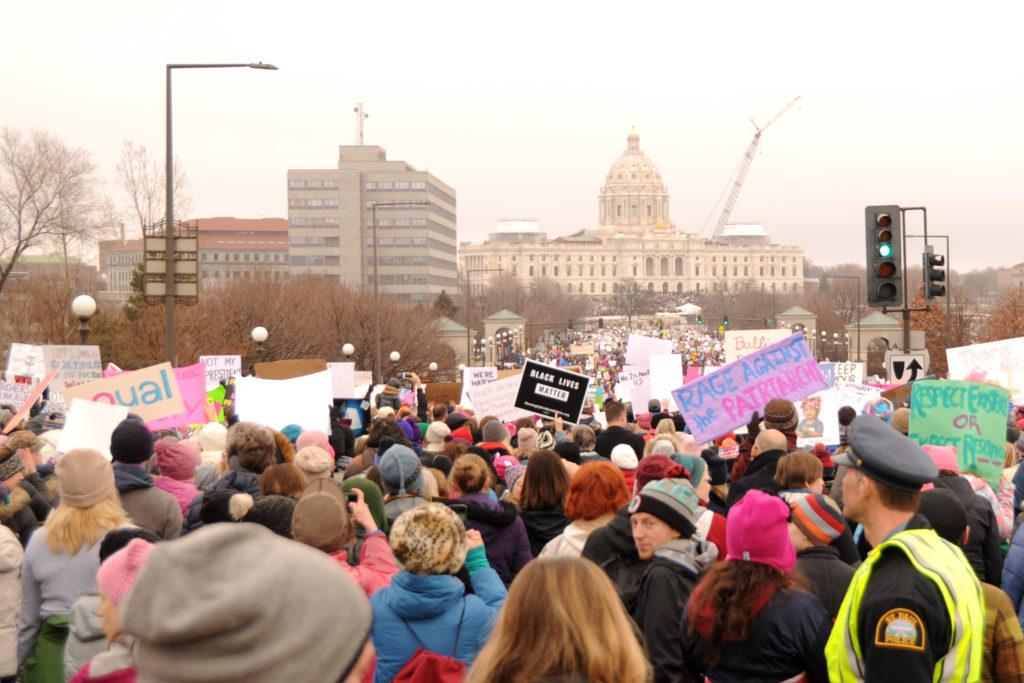 A delegation of Macalester students and faculty members joined in the biggest political demonstration in Minnesota history on Saturday morning, marching on the State Capitol in St. Paul for women’s and civil rights in the wake of Donald Trump’s inauguration as president last Friday.

St. Paul Police estimated that the crowd held between 90,000 and 100,000 people, making the St. Paul demonstration one of the nation’s 10 largest.

The excitement of the march – on a day in which more than three million people would protest Trump and advocate for equal rights across the world – was captured by a woman who, describing the event, said, “The buses are full, the trains are full, there are thousands of people on University Avenue… this is a big deal.”

Speakers at the main event included DFL gubernatorial hopeful and Macalester’s representative to the Minnesota House Erin Murphy, and Ilhan Omar, a former refugee who became the first Somali-American elected to U.S. office in November.

Amy Elkins, an English professor who joined Macalester last year from Emory College in Atlanta, said, “As a feminist scholar, I don’t even have the words to describe how devastated I am about this [administration]. I’m here to support my students, but also because I believe in women’s rights as human rights.”

With trains and buses packed full of protesters, a number of Macalester students had to find creative ways to join the march. For some, that creativity included walking the four miles from Macalester to the protest’s starting point at St. Paul College.

Kata Hahn ’20 spent two hours trying to make it to the protest. When she finally got hold of an Uber, the driver said that he “wasn’t going down there” due to traffic which, in some cases, extended for over a mile from the Capitol.

Marchers in transit to the event were met with a stream of honks and smiles from traffic. The positive spirit of the event — during which just one arrest was made of a Trump supporter who pepper sprayed marchers — extended to those who did make it onto public transportation.

A girl on the same bus pulled out bars of chocolate and offered them to a group of women holding signs and wearing pink hats.

“It was so wonderful as I was making my way down Grand Avenue to see that huge line of people at the bus stop,” said environmental science professor Roopali Phadke. “I was bumping into students and colleagues left and right down at the Capitol. It felt like we were there in earnest.”

A number of Macalester students and faculty members traveled to Washington, D.C. to be at the epicenter of the event in a crowd that D.C. Police estimated was more than one million people strong.

Dio Cramer ’20, who is from the D.C. area, made a 17-hour drive from Macalester with a friend and arrived at her house at 8:00 a.m. on the day of the march. “We got stuck in the crowd and didn’t hear any of the speakers, but it was still powerful to be around that sheer number of people,” Cramer said.

Three of the faculty members who were in Washington for the demonstration — Adrienne Christiansen, Devavani Chatterjea, and Terri Fishel — will host a lunch event Friday in the library to discuss the experiences they had there.

Coming just one day after the inauguration of a president whose election caused phenomenal amount of grief and fear around Macalester and in many of the communities where the march was so well-supported, the tone of the event was surprisingly upbeat.

“It felt kind of jubilant,” Phadke said. “I think that was unexpected, but kind of cathartic. There was kind of a sense of joyfulness, of playfulness, and I thought that was an important antidote for a lot of people coming off of the week prior.”

The question, Phadke said, is what happens from here. “Now that some of Trump’s promises are coming through, I’m curious about what happens next,” she said. “Will 50,000 people show up for a Standing Rock protest? To block the Keystone XL pipeline?”

“It remains to be seen. A seminal moment in American history is underway.”