Ethics Bowl and their growth over the past four years 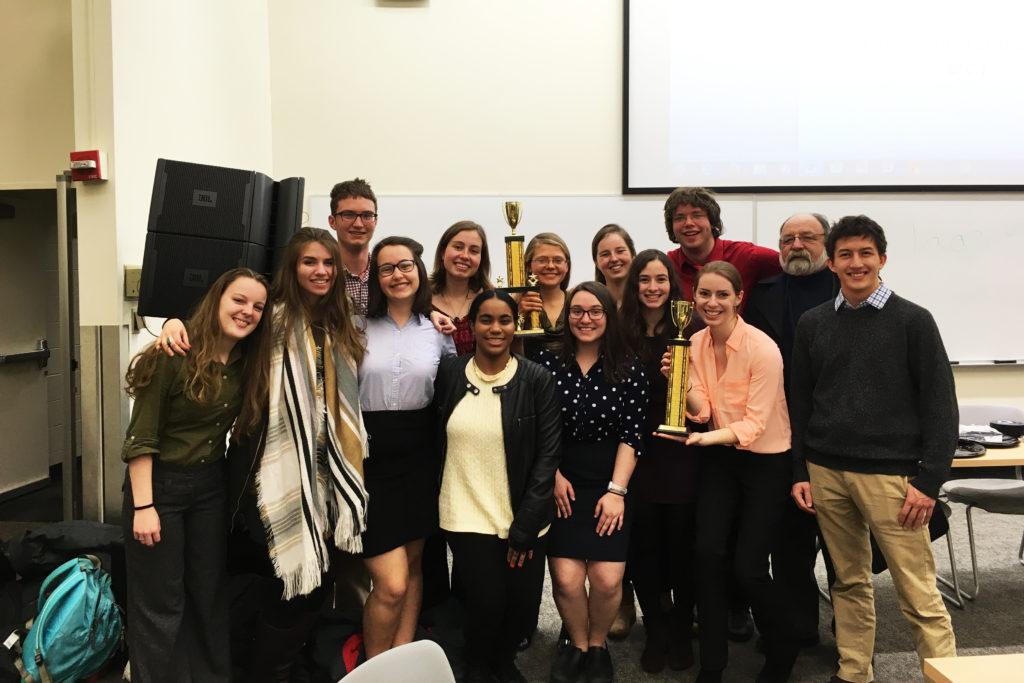 This past weekend, Macalester Ethics Bowl Team took first and second place in their regional competition and will travel to Dallas, Texas for Nationals in February. In light of the team’s hard work, Features would like to take a look at the history of The Ethics Bowl Team at Macalester. The Ethics Bowl Team has only existed in its current form for four years. Cami Garcia-Flahaut ’17 recalls the reformation of the Macalester Ethics Bowl Team. “My first year I went to the forensics meeting presentation given by Richard (Dick) Lesicko, he talked about mock trial and debate. I thought about joining the debate team and went to meet with Dick. But, he had an interesting proposition for Emily Crnkovich ’17, Marie Johnson ’17 and I. He asked if we wanted to try to run an ethics bowl team again. The previous year’s team had decided not to continue the program but he encouraged us to pursue the option…. Anyway, from the second or third week of first year onwards we met weekly and discussed ethics and just got to know one another. I really enjoyed the group atmosphere and the topics and we all decided to compete in the regionals ethics bowl and the rest is history!”

The Team has come a long way in the four years. Garcia-Flahaut remembers, “Our first competition, we lost almost every single round. We had walked in totally unsure of what to expect and the judges could see that.” Over the past four years, the team, “developed a more intensive schedule and more structure within meetings. We also bonded a lot more as a team and developed a more cohesive argumentative flow because in ethical rounds we can take turns speaking and there’s no structure to who needs to speak when!” says Garcia-Flahaut. Additionally to winning more often, the Ethic Bowl Team itself has grown in recent years. Garcia-Flahaut notes that “[The] team grew to about 14 competing members (which is huge because we started with a struggling four)… We really enjoy being an open, active group and hope to continue to make strides!”

Garcia-Flahaut describes the differences between Ethics Bowl to the related Bioethics Bowl and Mock Trial, “Ethics bowl has a wider focus on issues. Also, the competition style is different in that we do not receive judge questions ahead of time and therefore, it’s more a think on your feet type situation. Bioethics looks specifically at issues within the medical and scientific field and their implications… We look at a myriad of ethical cases. They range from vegetarianism, to gun control to international development to forced feedings in prisons. Usually, the competitions include topics currently in the news and the ethics nuances which encompass them.”

In preparation for Nationals, the Ethics Bowl Team will be coming back to campus in the middle of J-term to work together in preparation for Nationals in February. Aberdeen McEvers ’19 is going to Nationals and says, “I’m looking forward to going to Dallas, I’ve never been before, but far more so, I’m excited to show the enormous amount of work and preparation that the team has put in, payoff!” Keep your eyes on Ethics Bowl in February!