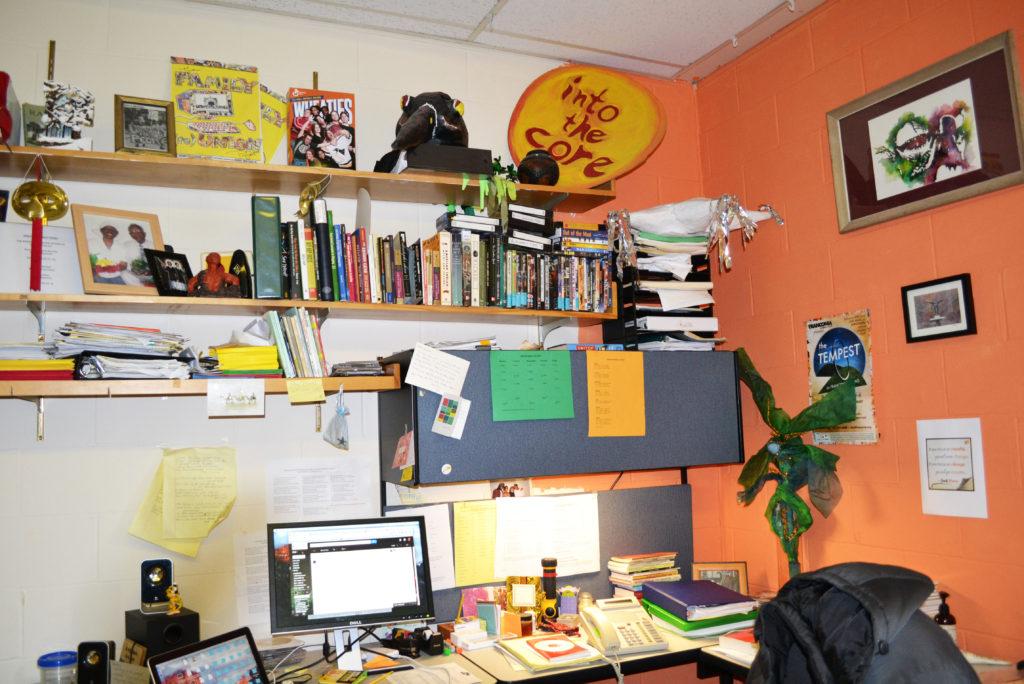 Sitting down with Harry Waters Jr. is an experience that everyone should have at least once in their lifetime. Waters invited me into his office warmly and ushered me to a chair sitting across from his. With a deep laugh, Waters was ready to start the interview. Harry Waters Jr. is the current chair of the theatre department and fresh off directing Urinetown: The Musical.

A lot of the inspiration for Waters’ office came from his desire to portray himself as an artist-scholar rather than a scholar-artist. “Most of my work comes with the work I do as a performer or as a director or as a community activist; as opposed to the writing and publishing that a lot of other academics do,” Waters explained as the difference between the two identities. Waters cited that he lives in a world where he must continually justify what he does and the way he does it. That being said, he tries to bring in objects that make his voice heard and provide a sense of comfort to himself as well as his visitors. “There’s not a lot of spaces on campus where I’m comfortable or where I feel welcome,” Waters admitted, and it is important to him to be comfortable in a space that he occupies everyday.

When asked what his favorite object in the room was, Waters lit up with a large smile and proclaimed, “Oh my God, there’s like four!” Waters excitedly pointed them out. “There’s one that my son gave me, this print that he found of Audrey II,” Waters said. Waters’ finger traveled to two prints by Ruthanne Godollei of the art department. “One was when I received tenure and the other one is this thing that she printed up for the election,” Waters stated. Another important piece to Waters was a picture that featured voices of the community in a collage. “It’s hard for me to pick just one thing!” Waters admitted with a grin. Waters continued, drawing attention to his orange painted wall. “I don’t know many people who have an orange-painted wall in their office!” Waters said proudly. When asked if he was allowed to paint his office walls, Waters said with a sly smile, “I just did it! What are they going to say now?”

Waters’ favorite seat in his office happened to be the seat he sat in for the interview. Careful thought was put into the location of the seats. “I set it up so that whoever I’m talking to can see out the window and see the other things, and that I actually exist in a silhouette, but I get to see you very clearly,” Waters said of his arrangement.

Waters once again became excited when asked about the most interesting source for the objects in his office. Almost immediately, Waters pointed to a gray goose named Salad perched on the top shelf in the corner of his office. “I did a community-based theatre piece called Once Upon a River. It was a fantasy about a little girl who’s worried about the environment, so she ends up falling into this river and the animals that were in her room become these real characters,” Waters explained, citing the goose as the inspiration behind the play. The stuffed animals came from the girl’s bed and were made by a mother in the show. “She made a pattern, she found the fabric, and she made it and gave it as part of the show!” For Waters, the goose was important because it acted as such a personal piece that also connected with the work he does in the community.

Above Waters’ desk sits a picture of his parents, the first object he pointed out as meaningful to him. Secondly, Waters pointed to a Wheaties box that had an array of college student on the front. The box is from the first show Waters ever did at Macalester, called the Family Reunion Project. “Part of our trip of making the theatre piece was to travel as group to various site around the Twin Cities” Waters said. One of the stops was the Mall of America, where they had the opportunity to have their picture put on a Wheaties box. “I have this image that’s priceless of all of the people that were in that show” Waters reminisced, dating the first show back to 2003.

“No one has an office like this, I’m hoping!” Waters exclaimed. He pointed to his newest addition, a peacock rug as he covered his mouth and laughed. “Just because I needed more color coming up, you know?” Waters said, as if there weren’t any color in his office. Another feature piece of Waters’ office is the chaise lounge one of his students, Gillian Gold, made. Unfortunately the lounger did not fit in her dorm and Waters took it in. “Now it’s just part of the landscape,” Waters said, and laughed.