The Staves: three sisters muse on their Midwest chapter 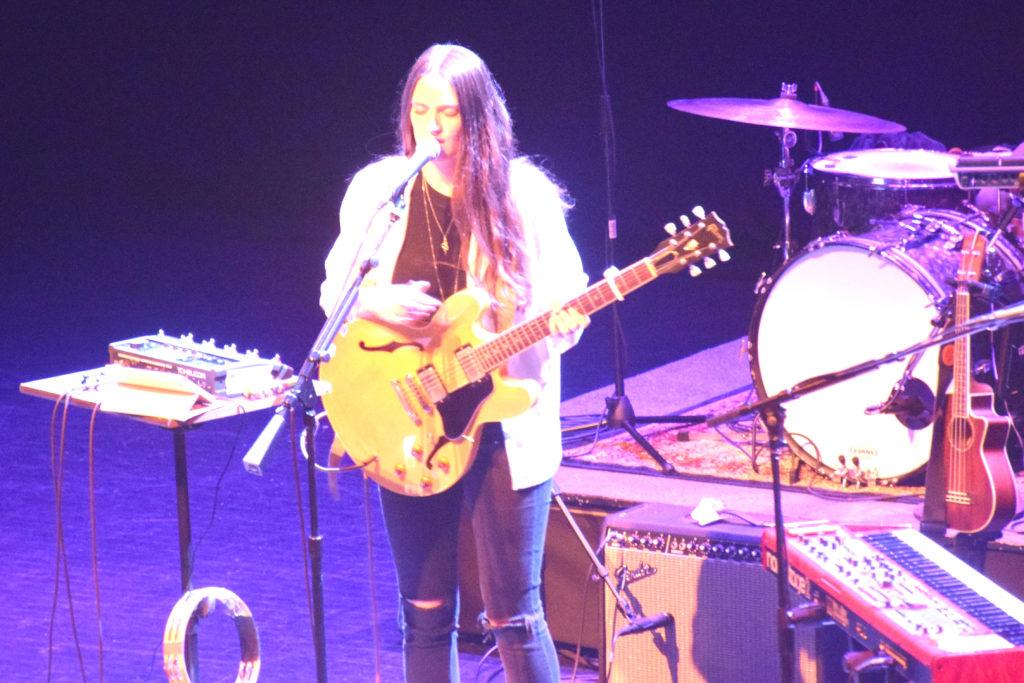 Camilla Staveley-Taylor of The Staves performs at the Fitzgerald Theater. Photo by Cameron Hill ’19.

Three British sisters, one remote Wisconsin recording studio and the lead singer of Bon Iver. The result? The album If I Was, by The Staves. Camilla, Emily and Jessica Staveley-Taylor make up the group, and they draw as much from their familial connections as from their natural musical talents. I had the pleasure of talking to Camilla Staveley-Taylor, the youngest sister, who described the process leading up to their most recent tour through the Midwest. That journey has taken them from the pubs of Watford, England to the Fitzgerald Theater in St. Paul, Minnesota, where they performed on November 1st. In the past few years, they’ve received international acclaim and toured extensively with Bon Iver, the Civil Wars and Mumford & Sons. How have they come this far, and where did they begin? Let’s take a look.

For as long as Camilla can remember, she and her sisters have been singing together. “Mum and Dad always sang in the house” and music was a defining element of their childhood. Raised on the Beatles, Simon and Garfunkel, Queen and ABBA, the sisters did not have to look far for inspiration. They listened to singer-songwriters Joni Mitchell, Neil Young and James Taylor, whose “more introspective songs,” as Camilla describes them, “lend themselves to [the band’s] natural style.” Introspection is apparent in the tenderness of If I Was, with the album exploring everything from heartbreak to homesickness. The Staves sisters have “always had a strong reaction” to songs that have an intimate quality to them. Their musical upbringing provided them with a taste of the style they would later develop as a trio, and they have built upon that groundwork to create something entirely unique.

Camilla claims that “backing vocals are as important as the main tune … in motown songs” and the other sixties music they grew up with. Perfectly blended vocals are The Staves specialty. Listen closely to them, and you will hear that no voice is solely backing the others or alone at the forefront. While each sister is highlighted in one song or another, they do so by emerging from a musical texture that the three of them have constructed. In this way, they are a “three-headed singer-songwriter” both in the studio and on stage. It is no small matter that they spent years together as a family before deciding to become musicians. While writing and arranging each song, their personal history adds another layer to that collaboration. Oftentimes, they fill in the gaps between each others’ ideas, weaving together each original thought to form a shared creation. After one sister arrives on the inspiration for a new song, a “natural point” arises when “the other two step in and arrange harmonies” to shape the original lines into a finished song.

Camilla also describes how their relationships impact this process. She says that “it’s quite good we know each other so well because you can write about things that are very personal to you, that might be a little uncomfortable to bring up fully in front of people you don’t know that well. Because we’ve known each other all our lives, we kind of know everything about each other anyway. Normally the other two will know what that song is about, even if we don’t say what it’s about. There’s not often that much conversation about subject matter, it’s kind of intuitively learnt.”

The sisters have a close relationship that builds this intuition, as they are able to relate to one another with ease. Through music, the sisters can delve into their most intimate thoughts. Not only does this help them in writing their songs, but it also helps them to meld into one another’s sound when performing. And that’s the beauty of The Staves. Each song explores the unique experiences of each band member, while also milking those moments when their emotions bleed into one another. Most people can relate to the melancholy of breakups and the sorrow of missing home, but few can make them as beautiful as The Staves do through song. Listening to The Staves is both heartbreaking and uplifting and one can seek comfort in each sister’s musical line. Moreover, one listens in awe of the empathy between these sisters.

When asked how their relationships have evolved, Camilla expressed that they have intensified. They were close before becoming The Staves, but having a professional relationship on top of that added a new element to their closeness. “You’re no longer bound by blood,” Camilla says, but also “by a record contract.” In recent years, they have learned how they differ from each other, and how they “have to work hard to let everyone have their own outlet.” In the end, being in a band together has helped them to “grow up and accept each others’ differences.”

To aid in that development, The Staves retreated to a studio largely isolated from the rest of the world. In the beautiful, snowy fields of Wisconsin, they worked with Bon Iver’s Justin Vernon at the recording studio dubbed April Base. There, The Staves felt free to explore their sound, to take their time recording and to just let loose. Camilla recalls “that being in the middle of nowhere really fucking helps. To be away from your everyday life and distractions, you don’t have to worry about being too noisy. You can stay up late at night and get drunk and be loud, and feel completely free.” To them, “it felt like the world wasn’t watching.” For anyone gaining attention in the musical world, this privacy can be a blessing. The Staves were able to develop their sound free from outside pressure, and without a fixed agenda. Camilla says that this was “a nice little secret thing to do.”
Following the long tour for their first album, Dead & Born & Grown, a break from the spotlight came as an immense relief. “We felt very hungry to create something new at that point, and we had a lot more that we wanted to try out and give,” Camilla says. She describes how Vernon gave them the “freedom to try out any idea” regardless of his own vision for the album. To her, April Base has a “kind of magic.”

The studio invited The Staves to take a deep breath after their long days of touring, and they took that opportunity to contemplate. By the end of the recording process, they felt at home at April Base. As musicians who are often on the road, the studio helped them to fight the feeling of being “homeless” and “a bit of a nomad.”

Even while immersed in the upbeat, comforting world of April Base, they drew upon heartache to produce their new album. “I think we should work on writing some happier songs,” Camilla said, laughing. Although many of their songs are deeply sorrowful, they are also joyful at times. The last song on their album, called “Sadness Don’t Own Me,” pushes against sorrow in the present, and to frame a happier future. For the next few years, The Staves’ future will remain tied to the Midwest while they produce new work. They have relocated from England to Minneapolis, and are currently on tour through the Midwest.

In their concert at St. Paul’s Fitzgerald Theater, The Staves showcased If I Was with a few bold additions, not feeling confined to each song’s recorded cadence. They brought the audience to tears with the tender chords in “No Me, No You, No More,” singing with a profound clarity. With echoing rounds of vocals recorded and replayed throughout the song, they slowly built the song’s tension until the pain embedded in each note was almost unbearably beautiful. This tension came not only from the tender quality of their voices, but also from the power behind each one. The Staves sisters are far from timid, and they are not afraid to utilize every ounce of their musical strength, whether vocal or instrumental. They incorporate elements of rock ‘n’ roll through guitar riffs and piano progressions.

The audience erupted with laughter at every joke that passed between the sisters, audibly sighed after the last perfect chord of “Let Me Down,” and followed the last song with a standing ovation. The sisters have found the Midwest “to have a really big heart,” filled with “egoless, good, sturdy folk.” The Staves have “felt a tight personal connection to this part of the country,” and have tried to build that relationship by inviting local musicians to open for each of their Midwest performances. They hope to collaborate with musicians as well, and will reach out to artists Aero Flynn and Kings of Convenience.

“We want to write some more, do some demos and see what comes out of the weird, American, Midwestern chapter that we’re in,” Camilla says. During that chapter, The Staves plan to return to Vernon’s studio for their next recording project. After experiencing the vibe of April Base, Camilla expresses the difficulty in returning to a studio where “it’s fully staffed and everything’s clean,” where “you have have to do the best performance ever.” At April Base, that pressure is replaced with a beer, good friends and a carefree atmosphere. Camilla says, “that’s our place, for now.”