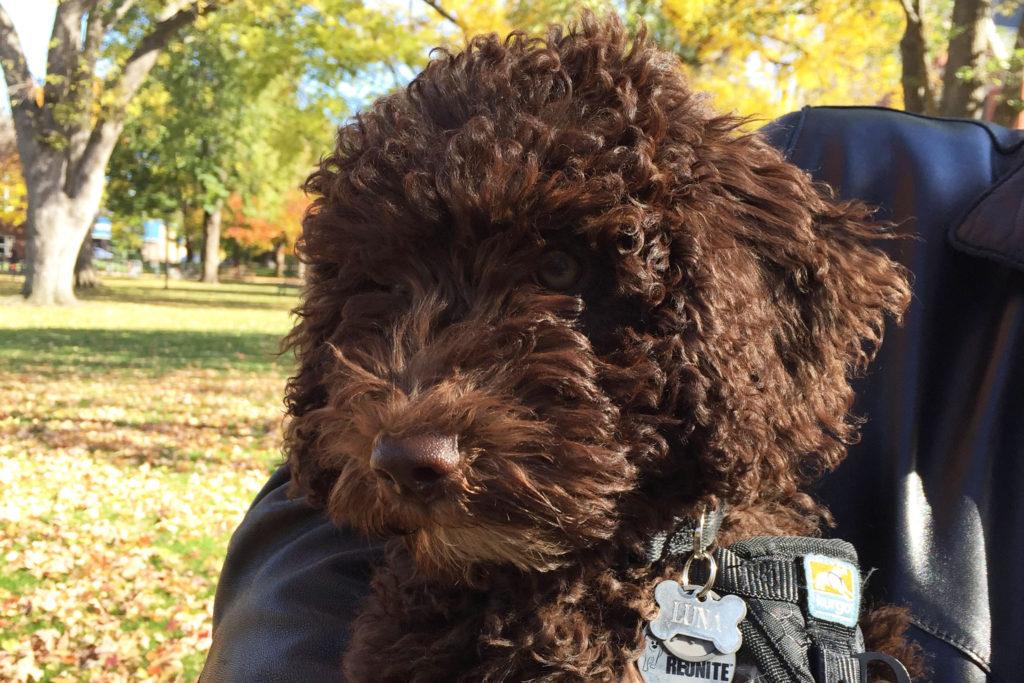 Luna was a little bundle of fluff throwing leaves up into the air behind her, creating an impressive trail. That was what I saw as I left Old Main that crisp fall afternoon, post-British Writers class. She had the high energy that herding dogs naturally possess. She could run after a frisbee all morning, says her humans, Anne and Keith. “She’s frisbee nuts,” says Keith.

Luna is also one of the shiest Spanish water pups I’ve ever seen. One of Anne, Keith and Luna’s favorite places to walk together is Lake Harriet, but their reason for picking the Mac campus that day was to help socialize her. They hoped to get her out and around people she doesn’t know, and maybe even other dogs. As I approached, she tiptoed behind the legs of Anne, peeking out at me, the strange human. It took a couple minutes and a few dog treats to coax her out and accept me as a kind human.

Luna and her humans have only known each other for four weeks of her 12-weeks of life. Anna and Keith are retirees and since all of their kids are grown up, they felt a need to bring Luna into their lives. “She was actually born in Connecticut, and came here under the seat in an airplane,” Anne explains. “There aren’t any breeders in Minnesota for this type of dog.”

The key for grooming Luna is to refrain from combing or brushing and, after baths, blot her coat dry. The locks that Spanish water dogs are known for, have not begun to form for Luna yet; but if you look closely at the top her head, there are a couple starting to come in.

Her favorite foods include the classic spoonful of peanut butter and the occasional bit of dried liver. “She’s devoted to her people, really affectionate and will lick your face a lot,” Anne and Keith agree. Another favorite activity that Anne and Luna often do together is watching TV. Anne says Luna curls up to her chest while they lounge on the couch. I might hesitate to let a dog who loves dried liver kiss my face, but I could never pass up a cuddle buddy for an evening of casual TV.