Amidst candles, Libertine offers pastries the size of your head 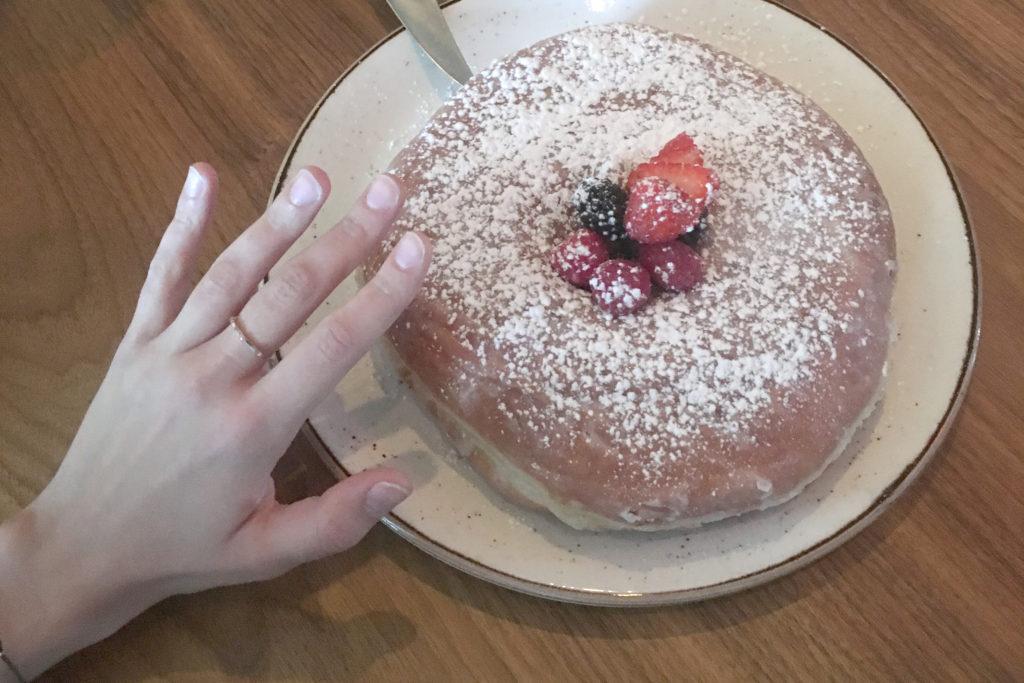 The Giant Donut at Libertine. Photo by Kate Rhodes ’17

The Twin Cities are saturated with brunch spots, so finding one that stands out from the rest can be difficult. Uptown, in Minneapolis, is one area where brunch seekers will not be disappointed. Over Fall Break, some friends and I decided to try a new spot, and after an extensive Google search, decided on Libertine, located in Calhoun Square.

Libertine is housed in a modern brick and glass building in Uptown. The dining area is spacious and centered around a long bar that runs down the center of the space. Light wood and dark paint create a sophisticated and modern aesthetic, and televisions hung above the bar play sports. We were seated in a section of the dining room that was off to the side of the restaurant. The tables were all arranged around a giant wax pile laden with candles, which, at four feet tall, supplied a warm flickering light across the space.

The brunch menu was short but diverse. The entrées were broken into four sections: “Crack,” “Grill,” “Griddle” and “Lighter.” A variety of small plates to share and toasts were also listed as starters ($6-14). To start off our meal, we ordered the Giant Donut ($10). Described on the menu as “bigger than your head,” the Giant Donut was definitely the highlight of the meal. Each of the six people at our table received a substantial portion of the fluffy and lightly glazed donut that was topped with a generous helping of mixed berries.

Although we started our meal with the highlight, the drinks and entrées at Libertine were also not to be missed. The Breakfast BLT, which was served with a heaping portion of french fries, was a variation on the classic bacon lettuce and tomato through the incorporation of a fried egg ($12). The Salmon Pastrami Benedict was a huge hit, combining poached eggs with seared salmon, pastrami spice and a creamy thousand island hollandaise sauce ($13). The Soft-Scrambled Eggs came with a liberal portion of blue crab mixed in and was garnished with avocado and sliced hot peppers ($12).

Other options on the menu included the more traditional pancakes ($8), kale and mushroom omelet ($10), jalapeno-buttermilk fried chicken and waffles ($16) and a lamb and brie lucy burger ($14).

The service at Libertine was incredible. While we were waiting for the majority of our party to arrive, our waiter took our drink order and made sure that we had everything we needed. He made great recommendations when we were struggling to decide what entrées we wanted, and his cheerfulness elevated the meal to another level.