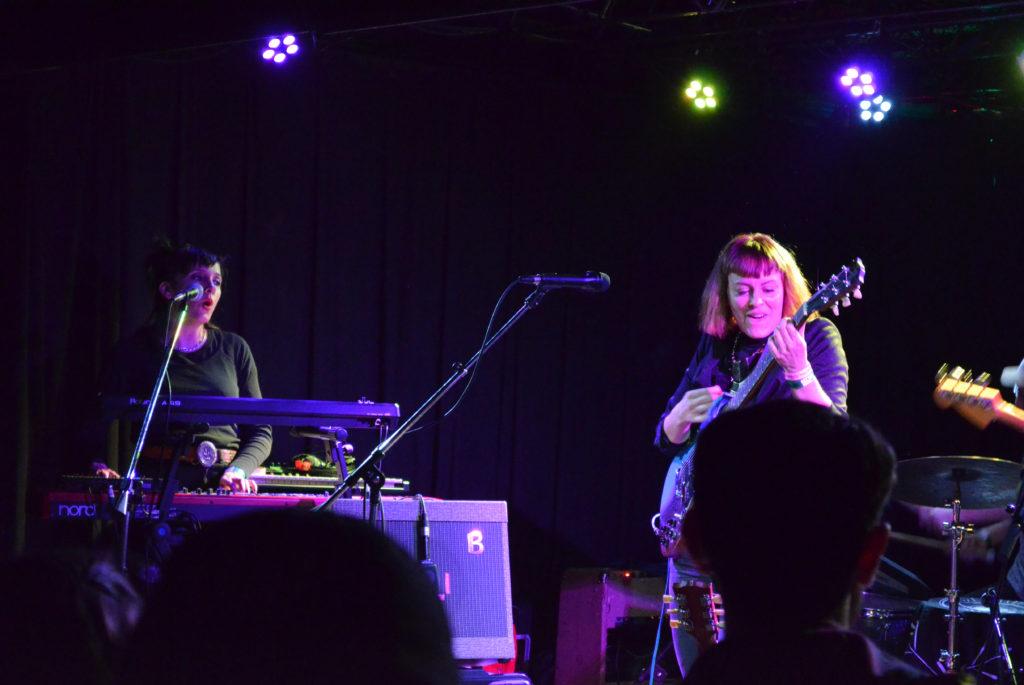 Laurel Sprengelmeyer, a singer, song-writer and multi-instrumentalist, is also the brains behind the band Little Scream. The band is currently touring through the Midwest to showcase their album Cult Following, which was released in 2016. Cult Following has pulled the band further into the realm of experimental pop, allowing it to gain more recognition among lovers of that genre. On October 25, Little Scream came to Minneapolis, where they performed at 7th St. Entry.

Despite this new album taking Little Scream into new pop territory, the band still retains the subtle traces of rock, indie and electronica genres that make it unique. These elements first formed in their album The Golden Record, which debuted in 2011. Upon first listen, this album seems in stark contrast to The Golden Record. But a closer look reveals that the foundation for her new record is nearly a manifestation of the old, drawing together many of the raw elements of The Golden Record that have been ruminating in Sprengelmeyer’s mind during the last five years.

While The Golden Record established her as a bold multi-instrumental artist with her foot firmly in the experimental space between genres, she took on a broader scope in this second album. For one, she invited musical guests including Mary Margaret O’Hara, Sufjan Stevens, Sharon Van Etten and Kyp Malone. She also collaborated with Richard Reed Parry, a Canadian record producer. You may know him as a member of the band Arcade Fire.

Pulling this album together was no easy feat. Cult Following was an audacious undertaking, and one that drew inspiration from some unlikely places. The first source of inspiration gave the album its name, and it came from Sprengelmeyer’s encounter with a cult-like group in Brazil. She was fascinated to see that the group lived in another reality, hoping to live on nothing but energy and light.

This album has a similar sense of otherworldliness to it, inviting one to treat the music almost like nourishment. Moreover, the album’s spiritual qualities are meant to evoke a profound sense of wonder in a listener. The lyrics draw connections between relationships and religion, youth and yearning. Sprengelmeyer explores the poignant moments of a whole life through this album, tracing the paths between falling in love, breaking up and allowing oneself to feel happy again. Not surprisingly, Sprengelmeyer replicated this journey in her performance, drawing the audience into the evolving world of Little Scream’s sound.

7th St. Entry provided an intimate space for the concert as the audience took refuge from the rain outside. The crowd shook off their umbrellas and settled down for a performance that promised moments of calm introspection appropriate for a rainy Tuesday night. The concert began with slower songs that encompassed the space in a warm, cozy feeling. But with each song, Little Scream slowly built a soundscape for the audience. After the first few songs, Sprengelmeyer reminded the audience that she was creating a “vibe” within which the next songs would enter. In this way, Little Scream set the scene, carving out a space for them to launch into more upbeat, experimental songs. Before too long, the audience members were jumping out of their seats and onto the dance floor.

“The Wreckage,” a song from Cult Following, aided in the transition from calm ambience to greater complexity. Following the song’s climax, “Evan” drew the audience into the full breadth of Little Scream’s sound. Extroverted and energetic, “Evan” combatted the rainy Tuesday night lull that accompanied audience members on their way in. Little Scream’s punctuated guitar chords and dissonant piano lines grabbed audience members by their raincoats and shook them awake. The final tune, “Someone Will Notice,” featured a powerful piano progression that pulled the audience along, rushing towards an intense finale.

At the end of the night, there was a common sense of satisfaction in the audience, with members spilling out into rainy streets happy with their Tuesday night.